The Stellar Physics Used to Probe Mysterious Crystals Inside a Cockroach

"The message that I’d like people to take away is that curiosity can make breakthrough discoveries." 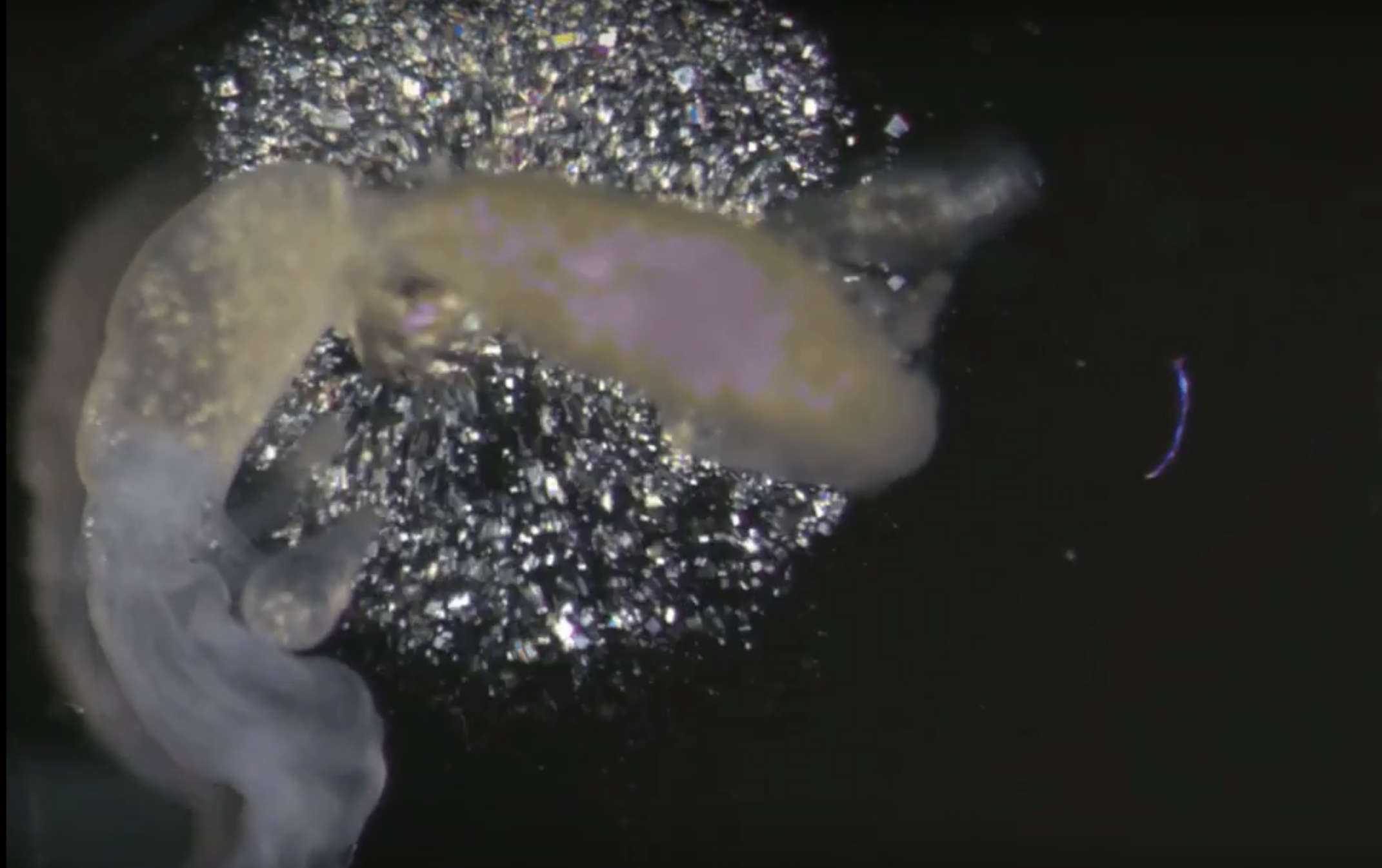 Protein crystals spilling out from the gut of an embryonic beetle cockroach. Source: YouTube

The phone in S. Ramaswamy’s office at the Institute for Stem Cell Biology and Regenerative Medicine (inStem) has been ringing off the hook. “Normally no one calls my office,” says the Bengaluru-based researcher. Ramaswamy had just talked to a TV channel about his recent research breakthrough. As we settle down for the interview, another reporter from a global news service calls to make an appointment for an interview. The story they were interested in has been 10 years in the making – a story that began when a young undergraduate student, Nathan Coussens, observed some crystals in the gut of an unborn Pacific beetle cockroach.

Commonly found in the landscapes of Hawaii, the Pacific beetle cockroach (Diploptera punctata) is the only known species of viviparous cockroach. This means that it gives birth to living young, not eggs, and the offspring are nourished by the mother in her brood sac. Studied in laboratories for many years now, these roaches have suddenly shot to stardom as the world’s next superfood source, mere weeks after a study published by Ramaswamy and his colleagues in IUCrJ, an open-access journal published by the International Union of Crystallography.

In the spring of 2006, Coussens, now a senior research scientist at the US National Institutes of Health, found a specimen of the Pacific beetle cockroach in the laboratory of Barbara Stay, at the University of Iowa. Stay, dubbed by colleagues as ‘Cockroach Lady’, had the largest collection of the world’s cockroaches during her time in Iowa. Coussens’s interest was piqued by the shiny crystals he saw in the gut of the cockroach. Stay had seen these crystals before. Crystals in the gut, when observed, are assumed to be crystals of urea or waste products that crystallise very readily. Coussens, however, had a hunch that these might be different. He took them to Ramaswamy, then a professor in the Department of Biochemistry at the University of Iowa, who studied crystal structures. Coussens put them in the X-ray beam and found, to everyone’s surprise, that these were proteins and not waste.

“Once we realised these were proteins, we were hooked,” said Ramaswamy. “We wanted to find out what these crystals were, understand the protein. It is actually nontrivial to get crystals grown in vivo (inside a living organism).” Naturally occurring protein crystals are rare: making proteins crystallise is usually a challenge for crystallographers. The researchers wanted to know what about the structure makes these different and understand their function at a molecular level. At 10-20 microns, the crystals were larger than the few known naturally-occurring protein crystals, but small enough to make structure determination using X-rays difficult.

When nothing is known about the structure of a protein, researchers resort to a nifty trick, one of the oldest in the book, which makes it possible to effectively use X-ray crystallography and solve the structure. One or more heavy atoms are introduced into specific sites in the crystal without disturbing its perfect repeating pattern. But the researchers were unable to incorporate heavy atoms in these crystals. Efforts at preparing the protein crystals for nuclear magnetic resonance, a different technique for structure determination, also failed. They even wrote a proposal to NASA, who were conducting experiments to see if protein crystals could be grown better in space, to send the cockroaches to space. “We tried a number of interesting things and did it as a fun, really curious project,” said Ramaswamy.

With Ramaswamy’s move to inStem, Bengaluru, the project took a backseat. However, in early 2013, Leonard Chavas, a scientist who had learnt about the project from Ramaswamy, was eager to initiate it again. With his easy access to SOLEIL, a synchrotron facility near Paris, France, where he manages a beam line named PROXIMA1 and heads the HelioBio section, Chavas was uniquely positioned to help solve the technical challenge of determining the structure of proteins contained in the micro -crystals. “I work with new X-ray sources called X-ray free electron lasers. Using these x-ray sources, it is possible to work with very difficult samples,” said Chavas.

The technique that resolved the structure is called sulphur single-wavelength anomalous diffraction (S-SAD). Chavas explained, “When you have difficulties solving a structure, it is good to work with atoms that are easier to see, that are bigger. For that, you need to introduce heavy atoms into the system, but that didn’t work here. However, sulphur is already present in most, if not all, proteins known so far. So if you are able to find a way to get good signals from the sulphur, then you can use it as a pseudo heavy atom that helps you to solve the structure.” His team built a beam line at the Photon Factory, a synchrotron in Japan, which worked at an energy that could ‘see’ the sulphur atoms. However, that was not the only challenge.

The packing or arrangement of the molecules in the crystal was, in crystallographer speak, space group P1. This, in Chavas’ words, “is the most difficult space group for structure studies because there is no symmetry between the molecules.” Before this, no structure in P1 had been solved using S-SAD. “It helped that the crystals were so good. The data was actually very nice,” said Chavas.

Sanchari Banerjee, a postdoc in Ramaswamy’s lab, worked with the team to analyse the data and resolve the structure. They learnt that the crystals were unusual in many ways. These crystals were not made up of one protein but three; i.e., they are heterogeneous, not homogeneous. This was so surprising that the researchers had to double-check their results using a second technique called mass spectrometry. “We crystallographers struggle hard in the lab making homogeneous protein samples to get crystals that will diffract well, and here nature has provided us heterogeneous crystals that diffract so well that we can see the atoms they’re made of. This is extremely fascinating,” said Banerjee.

Bound to these proteins are sugars called glycans and molecules of fat, a combination of molecules akin to that in milk. The protein-rich liquid food provided by the mother cockroach, the researchers realised, had crystallised in the embryos’ guts, to be always readily available to the quickly growing offspring. The researchers are now busy expressing the protein in the bacteria, E. coli and in yeast. The scientists, curious as ever, are keener to use the versatility of yeast as a molecular toolbox to learn more about the remarkable crystals, in particular to test whether their theories about what makes them crystallise so readily are accurate.

During their investigations, the researchers estimated the calorific value among other properties. They found that “a single crystal is estimated to contain more than three times the energy of an equivalent mass of dairy milk.” The potential of harvesting the crystals as a source of nutrition has triggered tremendous interest in the popular press, many of them tapping into the ‘ick factor’ – the one that food made from cockroaches would provoke. In the last few weeks, the number of articles, TV stories and even YouTube videos “have multiplied like roaches”, jokes Ramaswamy.

The team will investigate bioengineered yeast as a possible route to producing and developing energy-rich food supplements fit – and more agreeable – for human consumption. Ramaswamy hopes that this well-liked story will also inspire in its wake a popular support for open-ended, basic science. “The message that I’d like people to take away is that curiosity can make breakthrough discoveries,” he enthuses. How likely is it that someone setting out to make an energy-rich food supplement would go looking in a cockroach’s gut?

Harini Barath is a science writer based in Bangalore. She manages science communication for IndiaBioscience, where this article originally appeared.