Both the kilometre-long billow clouds in Earth's atmosphere and a surprising structure in the Perseus galaxy cluster are the result of a common feature of fluid dynamics. 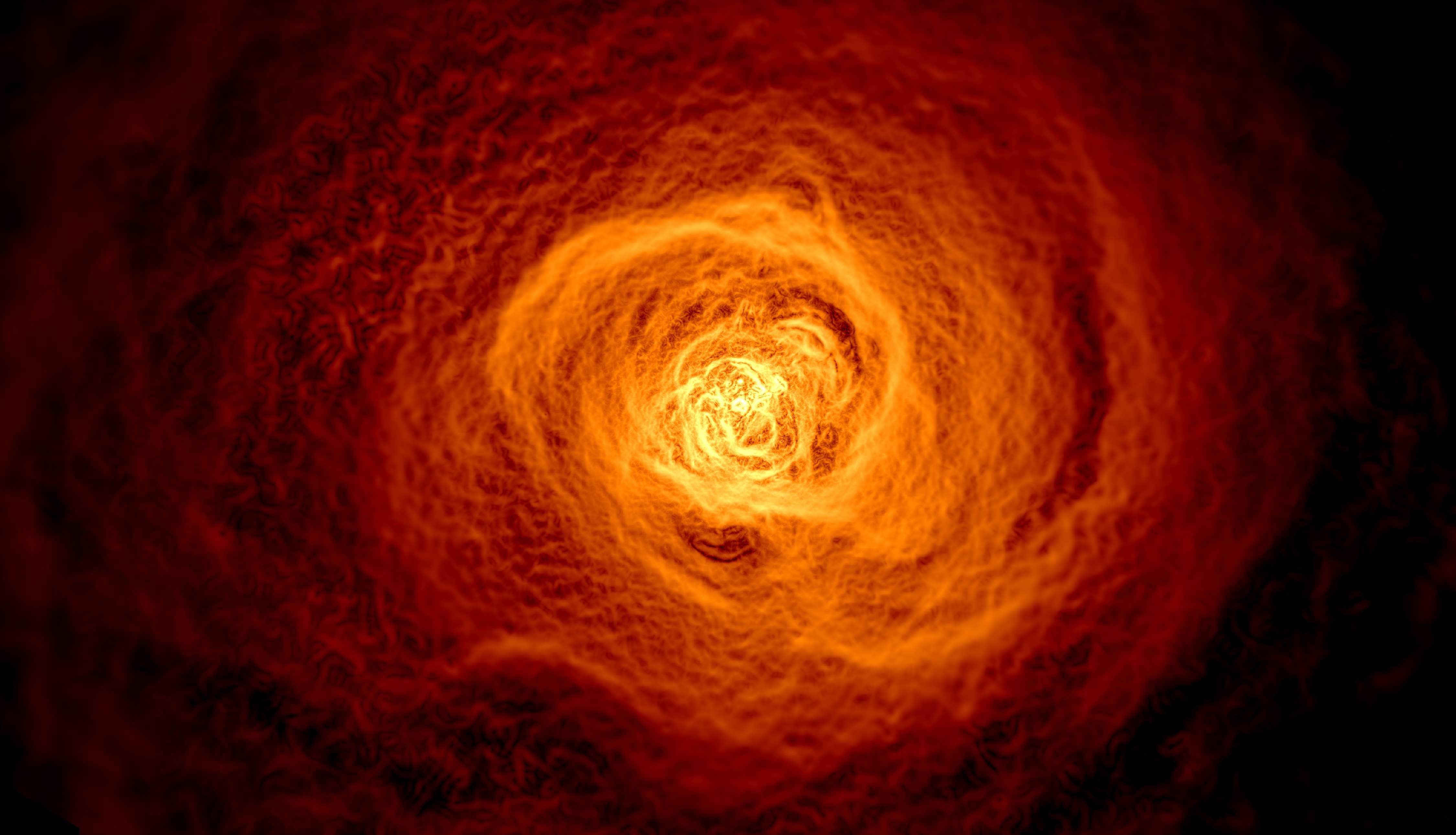 An image of the Perseus cluster obtained by Chandra, with X-ray information enhanced. The frame's breadth can fit ten Milky Way galaxies. The cold front is visible at the 7 o'clock position relative to the centre. Credit: NASA, CXC, GSFC, Stephen Walker, et al.

A common reason people ask for a window seat on a flight is to be able to look at beautiful clouds. And arguably among the most beautiful is the billow, a streak of clouds resembling the waves Hokusai imagined in his The Great Wave off Kanagawa print (see below). In technical parlance, billow clouds are examples of a Kelvin-Helmholtz (KH) instability. When two layers of fluids – like moisture-bearing streams of air – flow parallel to each other at different speeds, the boundary between the layers becomes unstable, with the result that billow-like clouds begin to form. 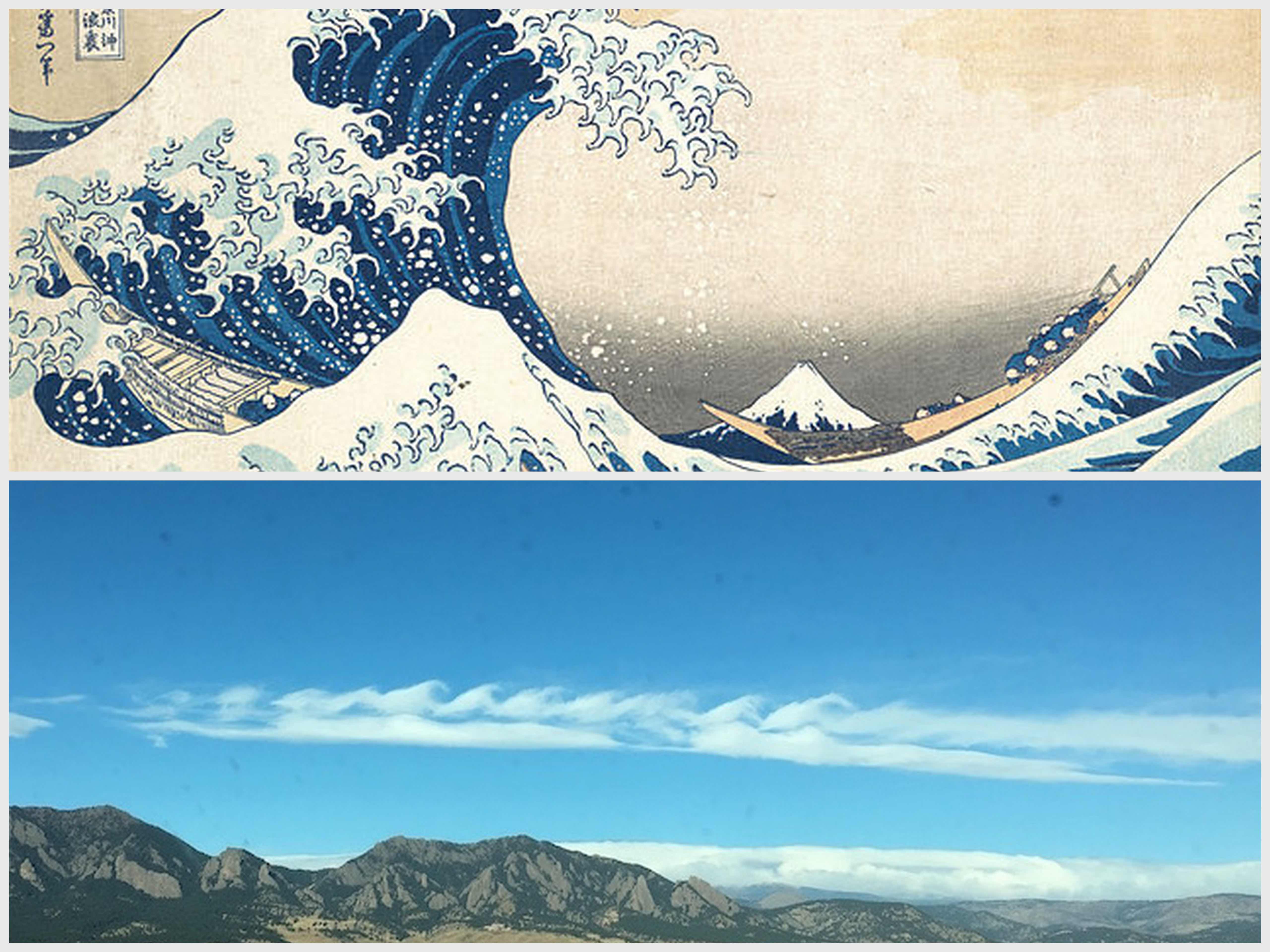 Credit: Wikimedia Commons (above) and University of British Columbia (below)

KH instabilities are a common sight closer to the ground as well. They show up in the deep sea as well as on the surface of large water bodies. Away from Earth, they’ve also been observed making waves (literally) in Saturn’s atmosphere, around Jupiter’s Great Red Spot and within the Sun’s corona. In each example, all that’s happening is that two layers of fluids are interacting with each other, yet the outcomes manifest in different sizes. Over the Sun, they’re as wide as the US.

Even more recently, a study found that KH instabilities could be behind a formation 163,000 lightyears wide observed near the Perseus galaxy cluster. This cluster is 238 million lightyears away and contains thousands of galaxies immersed in a soup of gas millions of degrees hot.

How could such a simple phenomenon, which forms benign clouds above Earth, have sculpted an intergalactic monstrosity out of hot gases and dust?

The study’s authors used data from the Chandra X-ray observatory orbiting Earth to study the formation. Called a cold front, it is a giant boundary that divides two regions of the space around it. Behind the cold front, space is rarified with superhot gas and dust. Beyond it, the density goes up while the temperature falls off dramatically. Usually, these boundaries bend in a convex shape, outwards from the centre (like a beret), and aren’t particularly unique. However, the authors found that the one they’d spotted in the Perseus cluster was bending inwards, towards the centre.

This was a sign that a KH instability might have been at work. The authors speculate that at some point in the past, the Perseus cluster could’ve been a two-layered ball of gas, with a cooler inner core surrounded by a hotter outer shell. Then, some time later, a smaller galaxy cluster could’ve blown past, its gravity stirring up the Perseus’s outer and inner layers and sloshing the gas in the two layers around.

As the hotter shell would’ve flowed against the top of the inner core, KH instabilities could’ve forced the formation of billow-like waves. This latter bit didn’t come from Chandra data itself: its X-ray observing capabilities aren’t good enough to study the fluid mechanics of the cold front. Instead, the scientists used computational fluid dynamics – the technique of using the physical laws of fluid mechanics to simulate their behaviour on powerful computers – to elucidate the formation of the cold front.

Both a billow cloud on Earth and a gargantuan bay outside a cluster of galaxies are examples of the same phenomenon – even if one measures about a kilometre and the other, a distance our minds struggle to take full stock of. This is not surprising. An expert who uses the notoriously complicated Navier-Stokes equations to understand how fluids behave will tell you that the equations are scale-independent: they play out the same way no matter the size of the entity (as long as it’s macroscopic) they’re being used to understand. But ask yourself: even if you’ve figured out how physics performs this trick, has the trick itself become any less wonderful?