Spotted 43 Years After Prediction: The Dim Light of Neutrinos Bumping Against Nuclei

Making the discovery was like trying to accurately measure how much the Titanic would bob when an orange is dropped on it. 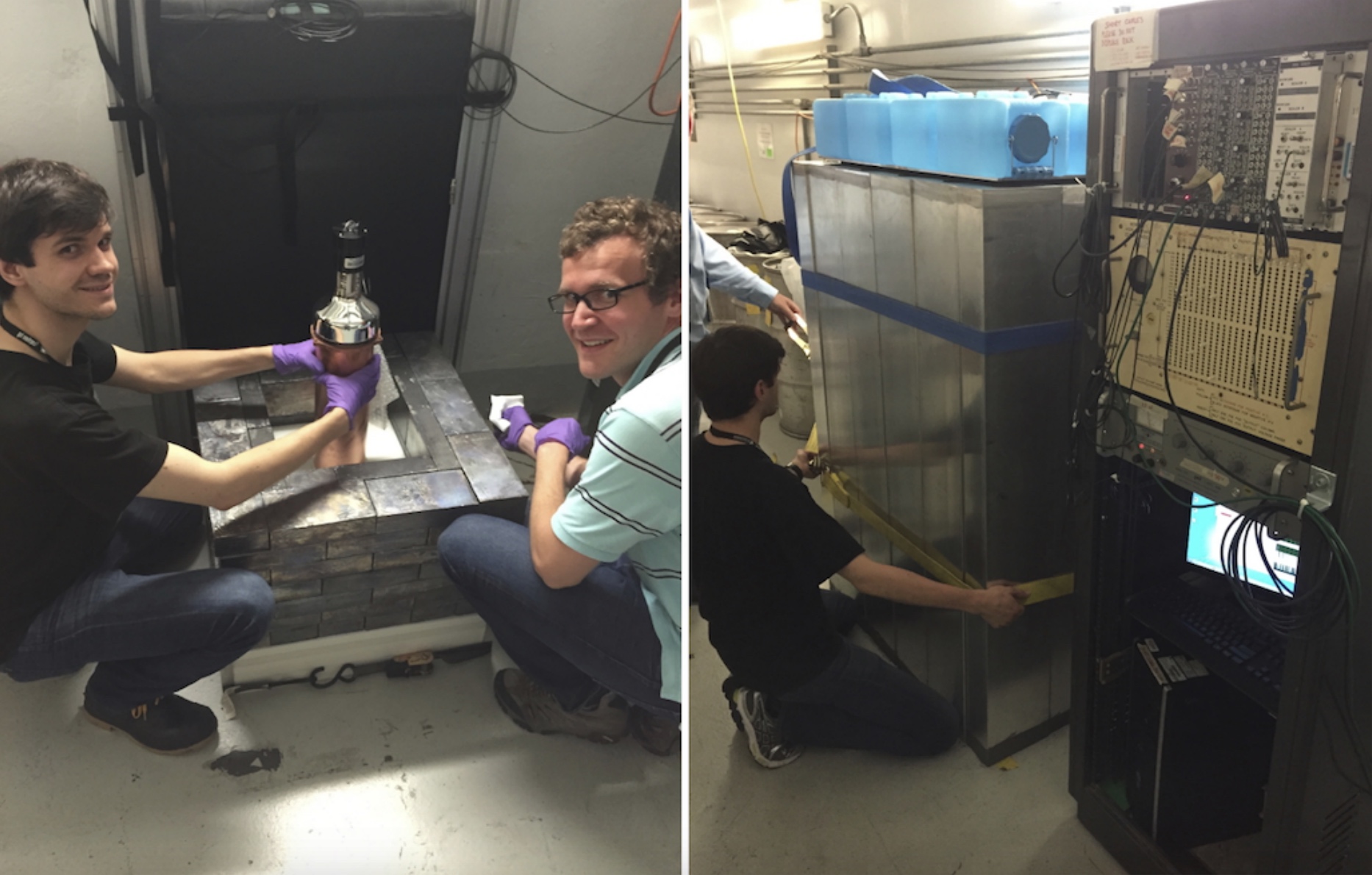 A new discovery made by an international collaboration of physicists is bound to be a shot in the arm for a dominant, but increasingly criticised, theory of elementary particles. At the same time, the discovery also opens new doors to understanding the universe’s more ghostly forms of matter, which have evaded comprehension despite the best efforts of many physicists over many decades. To understand its true significance, let’s take a step back to the basics.

Imagine you’re playing snooker and that you’ve struck the cue ball. When it rolls along the table and strikes a second ball, the second ball starts moving in a direction and at a speed depending on how the cue ball struck it. This process is called scattering. It’s pretty common in nature. A widely cited example is that of raindrops scattering sunlight to form rainbows.

Physicists use the scattering of particles – like protons and neutrons or the nuclei of atoms – to understand their properties and the forces at play better. Such interactions play a central role at the Large Hadron Collider, the science experiment that smashes nearly-light-speed protons head-on to break them apart and form other particles.

There are many types of scattering. One in particular is called coherent scattering, which is what happens when the ‘cue particle’ scatters off of a larger particle without ‘breaking’ that particle up. When the cue particle is a neutrino and the one it’s striking the nucleus of an atom, it is called a coherent elastic neutrino-nucleus scattering (CEνNS). The ‘ν’ in the acronym is the Greek letter nu (pronounced ‘new’) used to represent neutrinos in the physics literature. The ‘elastic’ means that energy was conserved during the scattering interaction within the neutrino and the nucleus alone. If the neutrino had been energetic enough to interact with a single proton or neutron of that nucleus instead of with the whole thing, it would’ve been called an incoherent scattering.

CEνNS was predicted by theoretical physicist Daniel Freedman in 1974. Now, physicists at the Oak Ridge National Laboratory (ORNL), Tennessee, have spotted it in an experiment for the first time.

Neutrinos are elementary particles that hardly ever interact with normal matter, so they’re excruciatingly hard to detect. This is because they interact only via the aptly named weak nuclear force. “For decades, neutrino interactions have been studied using the so called charged-current neutrino interactions – an initial neutrino scattering off of a target yielding an electron or a muon”, depending on the type of neutrino involved, explained M.V.N. Murthy, of the Institute of Mathematical Sciences (IMSc), Chennai. “Though neutrino sources come with all kinds of energies, the neutrinos can’t be detected [after the interaction]. So when they produce an electron or a muon in the final state, these are easily detectable and you work backwards to understand the neutrino’s properties.”

Nonetheless, physicists have been able to determine that neutrinos are emitted in most nuclear reactions – at the heart of nuclear power plants and at the heart of stars both – by the billions every second, washing through space. As a result, the discovery has implications for astrophysics as well. “CEνNS is an important process through which stellar energy is lost in the interior of the Sun, for which theoretical modelling is used,” said S.K. Singh, a physicist at Aligarh Muslim University. “These theoretical results can be vetted now.”

Some physicists have also proposed that neutrino detectors could be used to sniff out hidden fissile material. According to Juan Collar, a professor of physics at the University of Chicago, even palm-sized detectors could be built in the future.

This is because when CEνNS events are possible (which depends on the energies of the particles involved), the probability that it happens depends strongly on the number of protons and neutrons in the nucleus, a.k.a. the mass number. For example, Murthy said, “If you have an iron nucleus, incoherent scattering may be proportional to 56 [its mass number] but the coherent scattering will be more like its square (56 × 56), which is a much larger number. If you have lead with [a mass number of] ~200, you can imagine the increase.”

The detectors built for observing CEνNS events can be physically small so long as they meet these criteria. For other kinds of detections, however, the experiments tend to be gargantuan. For example, the India-based Neutrino Observatory, which was supposed to be set up in Theni district of Tamil Nadu, requires the installation of a 50,000-tonne detector called the iron calorimeter, as big as a five-storey building.

So why aren’t instruments based on CEνNS already here yet? When one neutrino manages to scatter off of an entire atomic nucleus, instead of just with one of its protons or neutrons, the nucleus recoils by a really, really small amount. So small, in fact, that though theoretical physicists predicted CEνNS in the 1970s, experimental physicists haven’t been able to build a detector sensitive enough to pick up on this recoil.

According to Diana Parno, an experimental physicist at the University of Washington, Seattle, “Even when the neutrino is carrying a fair amount of energy, the recoil imparted to the nucleus is quite small, hundreds of eV or a few keV. That’s not easy to detect.” Compare this to the energy of a single proton at rest: 938,000 keV. So measuring a CEνNS event is like trying to accurately measure how much the Titanic would bob when an orange is dropped on it.

Now, it seems the detector we’ve been waiting for is finally here.

Paralleling the quest for observing CEνNS in a lab, scientists have been building and perfecting experiments to detect another form of matter that shares its ghostly nature with neutrinos: dark matter. Physicists don’t know what particles dark matter is made of but they believe that their interaction with a normal atom’s nucleus should be similar to CEνNS. “The coherent elastic process is the simplest process which any particle with known or unknown properties, or a completely unknown particle like dark matter’s, would have,” Singh said.

So en route to hunting for dark matter, scientists have also been able to devise better detectors to detect CEvNS. “The recent interest in dark matter research gave a big boost to the developments of these detectors, which also made the observation of CEvNS possible,” Singh added.

It was one such detector that physicists at the COHERENT experiment at ORNL used.

Specifically, the COHERENT group stationed a 14.6-kg crystal of sodium-doped caesium iodide (CsI[Na]), in front of a source of neutrinos. The more the mass number of the nuclei, the higher the chances of a neutrino scattering off of it – and CsI[Na] fits the bill. Second, the CsI[Na] nucleus loses the really small amount of recoil energy imparted by the striking neutrino as a feeble flash of light (amplified and recorded by other instruments). Because measuring the recoil energy is the only way to tell if a CEνNS has happened, the scintillating behaviour of this compound helps.

Third, their detector was placed in front of the Spallation Neutron Source, which creates the world’s most powerful pulsed neutron beams in a reaction that also spews out neutrinos. Fourth, the detector and the source were separated by a 12-metre thick barrier of concrete and gravel that could filter out all other particles and send in the neutrinos alone. Above the detector was an eight-metre deep pond of water that could also shield it from cosmic rays from space. 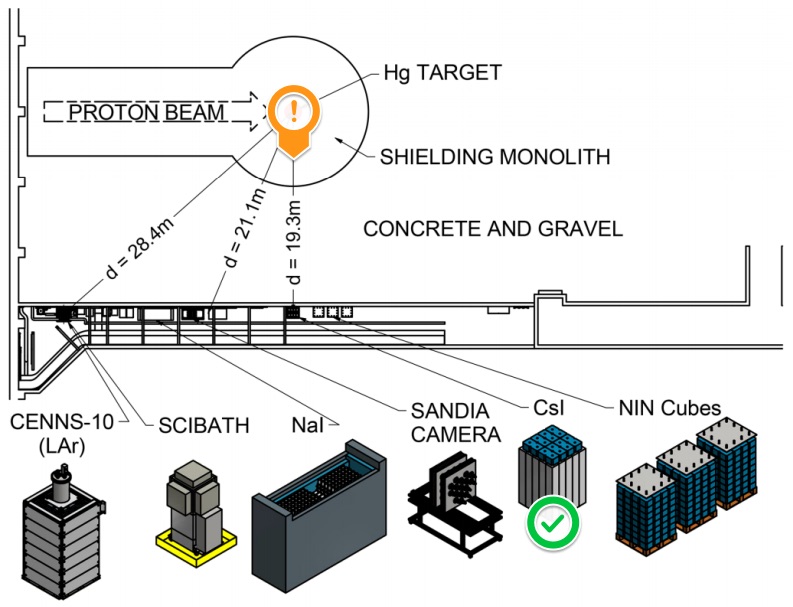 In this setup, about 150 CEνNS events were detected over 15 months of data-taking. They were all made at the 6.7-sigma confidence level, which means that the odds of their detections having been flukes are much less than one in a billion. “The agreement is excellent, we observe all the characteristic dependences on energy and time, and the predicted rate of interaction,” Collar, a member of the COHERENT collaboration, told The Wire. The ‘agreement’ he’s talking about is with the Standard Model of particle physics, a clutch of rules that predicts how various elementary particles should behave.

Physicists have been rooting for the Standard Model to be disproved by some experiment and give way for newer, more expansive theories. Such theories, for example, might be able explain still-mysterious things like dark matter. “Just by observing agreement in the rate of interaction predicted by the Standard Model, we can exclude some more-complex theories that have been proposed to supersede it,” Collar said. “We have already started to do that with this first result. We now plan to look for more subtle deviations, for instance in the spectrum of deposited energies, that could tell us more about certain neutrino properties.”

According to D. Indumathi, a professor of high-energy physics at IMSc, there are no reasons to doubt the conclusions of the CEνNS paper, published in the journal Science on August 3. However, she added that the areas of physics theory that predict events like CEνNS are not fully understood. “So it is true that this opens a new window to look for non-standard physics, but it becomes important to improve the theory calculation” as well.

Does this mean the COHERENT experiment has put paid to any threats to the Standard Model? It’s too soon to say. In fact, there is even reason for hope.

Indumathi pointed out that the COHERENT experiment and the CHARM experiment, which also studies neutrinos and is located in Europe, have reported different conditions – but with some overlap – in which “non-standard” interactions between neutrinos and quarks, the smaller particles that make up protons and neutrons, were possible. “By combining with different experiments, they may actually be able to be sensitive to new physics beyond the known Standard Model,” Indumathi said, “and this is very exciting because it is a measurement in a completely different sector at very different energies from usual collider searches.”