While Cassini is celebrated in the popular literature for its stunning photographs of Saturn's rings more often, its more unique contributions have advanced our understanding of the planet's moons. 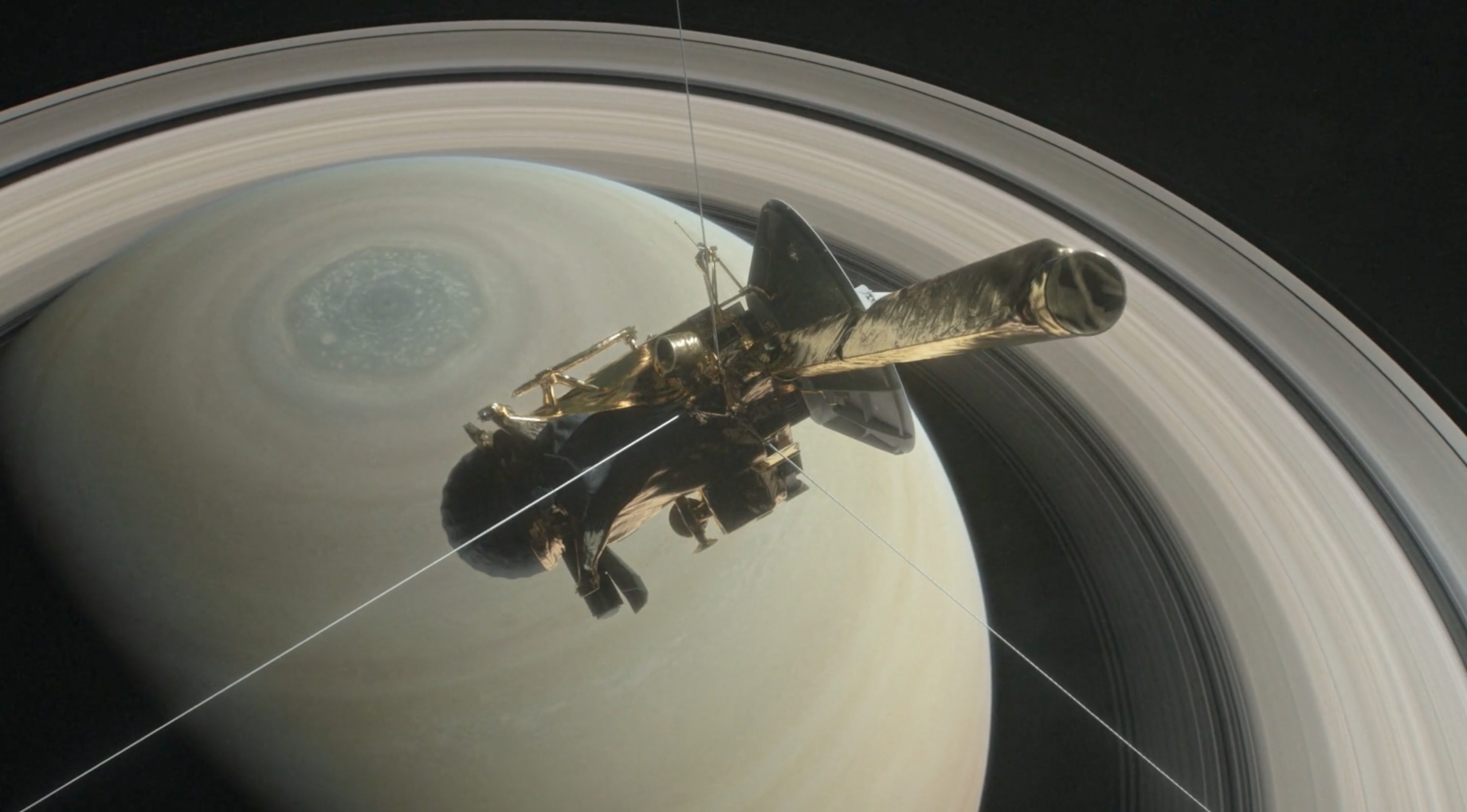 An artist’s illustration of Cassini zooming in towards Saturn. Credit: NASA/JPL-Caltech

After 13 years orbiting Saturn, its majestic rings and plethora of moons, the Cassini space probe will make a headlong dive into the gas giant and burn up on September 15. NASA has dubbed the event the ‘Grand Finale’.

The probe’s instruments will be awake during its final mission, transmitting data about Saturn’s atmosphere to scientists on Earth, until they’re fried to a crisp by the heat and pressure.

For over a decade, the Cassini probe has been humankind’s foremost eye in the outer Solar System. It has studied the planet, its rings and its 62 moons in fine detail. Almost everything we know about them is because of the probe, and we know a crazy lot now than we did before Cassini.

Cassini was named for the Italian astronomer Giovanni Domenico Cassini, who discovered four of Saturn’s moons in the mid- to late-17th century. It was a joint operation between NASA, the European Space Agency and the Italian Space Agency in 1997, and cost $2.1 billion to build and launch. It reached Saturn after seven years. It was expected to complete its primary mission by 2008 (it did), at which point it received an extension for two years, followed by a second one in 2010. In all this time, Cassini has travelled almost 2 billion km in orbits around Saturn and beamed back over 453,000 images. This graphic summarises Cassini’s 13 years orbiting Saturn, with moon flybys grouped into rows. The Grand Finale orbits are highlighted in their own row at the end. Click to enlarge. Caption & credit: NASA/JPL-Caltech

On December 25, 2004, a lander on-board the probe, called Huygens, was deployed to the surface of Titan, Saturn’s largest moon (bigger than Mercury) and one of only two bodies in the Solar System known to have liquids on its surface.

Through Huygens and Cassini data, scientists today know that Titan has a complex chemical ecosystem made up of hydrocarbons. In fact, while Cassini is celebrated in the popular literature for its stunning photographs of Saturn’s rings more often, one of its most unique contributions has been to advance our understanding of the moons of the outer Solar System.

Astronomers study what moons and asteroids are made of to understand where they could’ve come from because many of them are likely to be leftovers of the ingredients that formed the planets. For example, the asteroids beyond the orbit of Pluto have a certain composition while those between the orbits of Mars and Jupiter have a mixed composition. So this indicates some of the outer asteroids were pulled in by a giant planet into the inner asteroid belt some time in the past.

Thanks to Cassini, we’ve a more thorough idea of what Saturn’s moons are like, how they might’ve got there and how their properties affect the Saturnian system as a whole. The more notable of these moons, apart from Titan, are Enceladus, Rhea, Hyperion, Iapetus, Dione and Phoebe. Additionally, Cassini also helped discover seven new moons (Methone, Pallene, Polydeuces, Daphnis, Anthe, Aegaeon and one known only as S/2009 S 1).

On Titan, Cassini found that there are lakes, rivers and seas of liquid methane and ethane, methane clouds wafting through its skies and raining down seasonally. Titan’s lakes have tiny waves and fizz with nitrogen bubbles. Its deserts have electric sand that sticks together to form giant dunes. Using Cassini and Huygens data, scientists have been able to identify the presence of individual molecules and speculate that some of them could lend themselves to strange forms of life. To explore this world further, NASA has been mulling missions on and off.

As for Enceladus: Cassini found that it is a giant ball of ice containing a global ocean of salty liquid water a few kilometres underground. Perhaps the first alien life we find will be much closer home – and we wouldn’t be thinking this if not for Cassini. In fact, more generally, this discovery turned astronomers’ attention to a class of planetary bodies called ‘ocean worlds’, which they’re exploring to this day. As Thomas Zurbuchen, associate administrator for NASA’s science mission directorate, Washington, said in a statement, “Cassini has transformed our thinking in so many ways, but especially with regard to surprising places in the solar system where life could potentially gain a foothold.”

Cassini also found that Rhea has a charged surface that radiolyses its surface ice, creating a thin atmosphere of oxygen, ozone and hydrogen peroxide. That Hyperion’s density is so low that 40% of it is empty. That Iapetus has an inexplicable ridge on its equator running around most of the moon. That Dione – like Enceladus – could be harbouring a water ocean underground. That Phoebe could originally have been an asteroid in the outer belt captured by Saturn.

And on Saturn itself, Cassini studied the planet’s rings, what they were made of, how they were distributed in space and how they were being replenished. It studied a giant hurricane on the planet’s south pole in 2006 and, five years later, tracked the aftereffects of the largest storm ever observed in the Solar System in Saturn’s stratosphere. Cassini also observed Saturn’s north pole, which is ringed by a storm in the shape of an unmoving hexagon wider than Earth. It explored an atmosphere that is less dense than water vapour. In all, Cassini revealed “a giant world ruled by raging storms and delicate harmonies of gravity”.

As it happens, one of these “harmonies” may have affected life on Earth. According to Alex Parker, a planetary astronomer at the Southwest Research Institute, Texas, the meteor that wiped out the dinosaurs 65 million years ago could have been a rock drifting aimlessly through space before it got too close to Saturn, whose gravity could then have flung it towards Earth. In Parker’s words: “there is a non-negligible chance that Saturn killed the dinosaurs.”

Anyway, Cassini has also provided a clearer view of which questions future probes to the planet need to be able to answer. As the authors of a 2009 book asked,

What is the bulk composition of the planet? Does it have a helium core? Is it enriched in noble gases like Jupiter? What powers and controls its gigantic storms? We have learned that we can measure an outer magnetic field that is filtered from its non-axisymmetric components, but what is Saturn’s inner magnetic field? What are the rings made of and when were they formed? Was the proto-solar disk progressively photo-evaporated of its hydrogen and helium while forming its planets? … Did Jupiter and Saturn form at the same time from cores of similar masses? … Finally, the theory behind the existence of its rings is still to be confirmed

Also read: No majestic lord of the rings, Saturn is really a master of deception

Evidently, Cassini has had a journey grander than its finale, and recounting all of its findings would take many hundreds of pages. It surveyed a remote neighbourhood of the Solar System all alone for over a decade and forged a strong relationship with scientists interested in what it was finding. Scientists have also imagined Cassini as having forged a relationship with Saturn in turn, and are loathe to speak about the mission’s end as suicide. Instead, many have cast it as the eternal union of two close friends.

Planetary Science Twitter, I made this for you. Inspired by @Alex_Parker's tweet about not casting @CassiniSaturn's Grand Finale as suicide. pic.twitter.com/PiY8icdVu2

Moreover, today, there are two more probes in the general area: Juno is studying Jupiter while New Horizons, after flying by Pluto in 2016, is now headed to study the outer asteroid belt. Based on Cassini’s findings, NASA has planned another mission – tentatively called the Clipper – to Jupiter’s moon Europa in the 2020s.

It’s for these reasons that the end of Cassini’s mission on September 15 has evoked sadness in the astronomy community. “The public mourning of Cassini serves as another example of the complicated relationship between humans and machines, and of the tendency of humans to anthropomorphise robots and care about them,” Marina Koren wrote in The Atlantic. “Even the slightest perceived hints of life in a machine – like Cassini ‘fighting to keep its antenna pointed at Earth’ – can cause people to see it as something other than just a collection of sensors and circuitry, and then react to it in an emotional way.”

I am writing about Cassini, and finding myself choking up, more than a little. I wasn’t expecting that. Perhaps I should have.

Cassini’s ‘Grand Finale’ was brought on by Cassini itself, so to speak. Because Titan and Enceladus could be home to life, leaving the probe drifting in space near them risks contaminating the moons with its parts. One of those parts is 32.2 kg of plutonium-238, the heat of whose radioactive decay powers three radioisotope thermoelectric generators on Cassini.

Instead, NASA has decided to send Cassini blazing down into Saturn. (If you prefer an alternative explanation, Parker – of the ‘Saturn killed the dinosaurs’ claim – has one: “symbolic act of cosmic justice for the former residents of planet Earth”.) The sequence of events was set in motion on April 26 this year, when the probe began to orbit Saturn such that it passed between the planet and its rings. There were 22 such ‘Grand Finale’ dives in the all, and the last one will plunge Cassini into darkness. 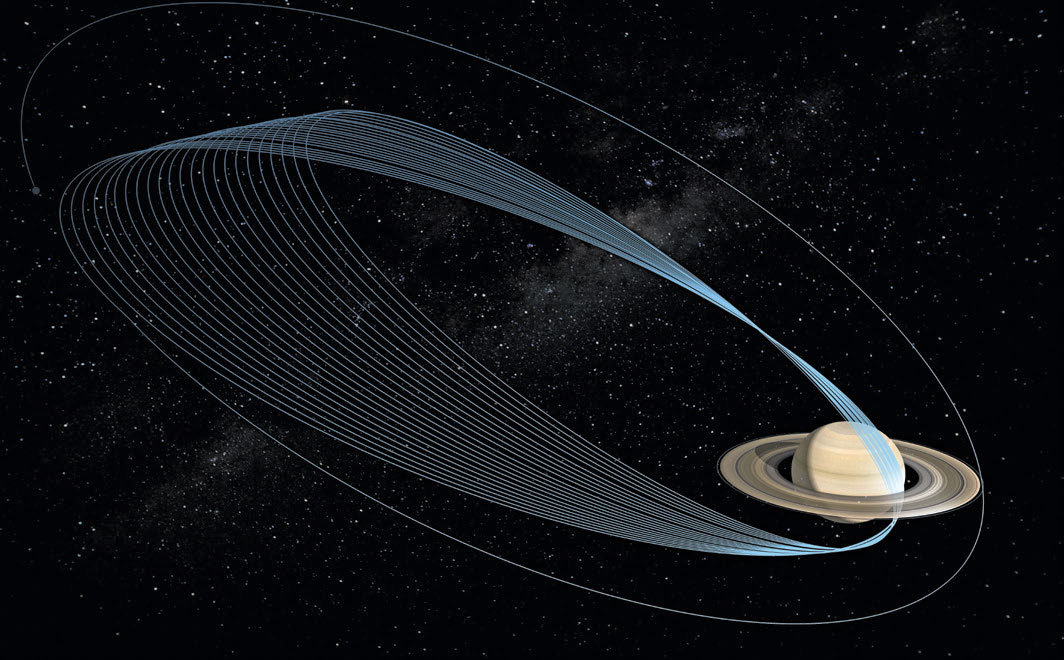 While its cameras will have been shut off a day in advance, the probe’s remaining eight instruments will keep recording and transmitting data about Saturn’s atmosphere on their way down, providing humankind an invaluable peek into an inhospitable world.

Until, shortly after 5:25 pm IST, the signal goes quiet.