An Old TB Detection Test Gets a Much-Needed Makeover

A new compound called DMN-Tre has been found to skip the errors encountered with other TB detection tests, and is more affordable, quick and versatile. 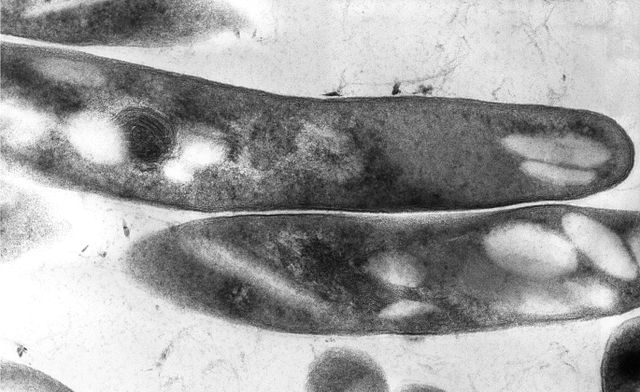 Looking for mycobacteria in sputum smears remains a common method for detecting tuberculosis (TB), especially in low resource areas. However, these tests are less sensitive and the results, less reliable. Now, by engineering a new fluorescent dye, scientists from the US may have provided a new lease of life to this antiquated method.

In a typical TB detection test, patients are asked to cough up sputum that is then spread as a thin layer on glass slides. Next, a technician adds dyes that bind to the bacteria, making them appear as coloured spots under a microscope. Two dyes, Ziehl-Neelsen and auramine, are used for this exercise.

The problem with confirming a TB infection this way is that “the dyes stain all cells with a very thick cell surface” irrespective of what kind of cells they were, explained Mireille Kamariza, an author of the new study. Because sputum contains many bacteria apart from the TB pathogen, some of these other microbes could also take up the dye and get counted as mycobacteria.

Another source of error is the destaining procedure. For identifying the microbe, it is essential to first remove the excess colour from the slides. This is achieved by rinsing the slides with a decoloriser and water to remove the unbound dye. The step called washing is usually performed multiple times to remove the background stain such that the marked bacteria become visible. But sometimes, after successive washes, some mycobacteria could also lose the stain.

The sensitivity of microscopy based tests varies between 32% and 94% depending on the skill and experience of the technician performing the test. This doesn’t bode well for disease control: TB is contagious and millions of new cases are identified every year. In 2016, 2.79 million were identified in India alone.

A new compound called DMN-Tre (short for DMN-tagged trehalose) can reduce these errors. The success of a method devised with this compound relies on the use of a sugar called trehalose as part of the dye. Only mycobacteria – and not other cells in the human body – use trehalose as fuel, and they also gorge on the dye. They then appear as fluorescent spots under a microscope, confirming a TB infection.

Part of the problem in detecting pathogens stems from the test’s design. Mycobacteria contain an oily substance in their cell walls called mycolic acid. It makes the pathogen’s outer coating unusually waxy to the extent that it impedes dye molecules from binding to this layer. As a result, mycobacteria don’t get stained.

Now, Kamariza and co. have turned this disadvantage on its head. They have tailored a dye that only fluoresces when it enters the waxy cell wall of the bacterium.

“DMN-Tre is a solvatochromic dye – it can ‘sense’ its environment,” Kamariza told The Wire. This means DMN-Tre behaves differently in different solvents. When in water, the dye will not fluoresce. But the minute it encounters a greasy environment, it starts glowing, according to Kamariza.

The researchers stumbled on the possibility of producing such a dye when they were studying trehalose and its function in mycobacteria. To understand the fate of the fuel within the pathogen, they needed tools to track the sugar. The simplest way to do this was by attaching a fluorescent molecule to a molecule of trehalose.

By tracking the sugar, they found that when trehalose molecules entered the bacteria, they became modified and added to the waxy cell wall.

“When I joined the team, I noticed that if we could modify a sugar such that it fluoresces only when inside cells, we could use it as a diagnostic biomarker for TB,” Kamariza said.

DMN serves this purpose. The thing about DMN is that its structure changes in different solvents. When in an oily environment, it contorts in such a way that it starts glowing. Kamariza and team thought that by attaching DMN to trehalose, they could ensure the DMN came in contact with the mycolic acid in the cell wall. And that when that happened, the DMN would fluoresce.

Another advantage of working with trehalose is that it is specifically used by TB pathogens and not by other microbes usually present in the human body. While some other disease-causing bacteria also utilise trehalose, they are not present in human sputum and don’t risk affecting test results.

Once DMN-Tre was synthesised, scientists tested its diagnostic efficiency against other fluorescent dyes used to detect TB.

Kamariza and co. first assessed the dye on bacterial strains grown in the lab. While DMN-Tre appeared to be very specific for mycobacteria and could stain more than 70% of them under 30 minutes, the scientists found that those strains that were growing at a faster rate also had the most intense colour under a microscope. This implied that the test could distinguish between live and dead bacteria – an ability beyond the scope of other dye-based methods.

To confirm this, they deliberately killed a group of mycobacteria by heating them, and checked if DMN-Tre still fluoresced by combining with the cell wall. It didn’t.

Similarly, when the scientists added antibiotics to the sputum sample before staining it with DMN-Tre, there was a perceptible change in the intensity of fluorescence. A period of three hours was enough to alter the staining pattern. This has many implications, especially in detecting the drug-resistant variety of TB that makes up 47% of all cases in the world.

Patients carrying multiple-drug-resistant (MDR) TB do not respond to common drugs like rifampicin. Their condition can also remain undiagnosed until the diseases has reached terminal proportions. This plagues both treatment and control strategies.

Sumona Datta, a clinical research fellow at the Imperial College London, said, “It’s not that we don’t have treatment options against the drug-resistant type of TB. But typically, such drugs are more expensive, more toxic, less powerful and take a longer duration for treating the infection.”

As a result, medical practitioners prescribe drugs to treat a drug-resistant infection only after MDR-TB has been confirmed or when patients don’t appear to respond to a combination of two or more drugs. Unfortunately, the required therapy is often administered too late to make a difference to patient health.

“That is why the new study with DMN-Tre is more exciting,” said Datta, who was not involved with the study.

Using DMN-Tre, scientists can now tell if the mycobacteria strain is resistant to certain drugs within a day, at least in theory. This is a promising and inexpensive alternative to other methods of TB detection, some of which also require sophisticated instruments and can’t be used in resource-poor settings.

“The revolutionary thing here is being able to track treatment response,” Carlton Evans, a professor of global health and Datta’s colleague at Imperial College London, told The Wire. “The greatest promise is in studying if patients respond to therapy and when they become non-infectious.”

None of the existing dyes can guide such therapeutic decisions. That the proposed technique also takes under two hours to finish and is as sensitive as auramine makes DMN-Tre particularly useful.

However, some limitations that apply to microscopy-based tests also apply to DMN-Tre testing.

For example, to be able to see the bacteria under a microscope, 1,000-10,000 bacteria are required per millilitre of sputum, according to Datta. “If this condition is not met, then a large proportion of people with true TB may still be categorised as uninfected.” So the tedious process of culturing the bacteria is still the gold standard to achieve an accurate analysis.

Further, “this test cannot detect extrapulmonary TB,” Dutta said, referring to cases where the mycobacteria are present in organs other than lungs. It has been estimated that 10-25% of TB infections worldwide are of this kind. In India, the numbers can be anywhere between 30% and 50%. In infections of this type, the bacteria do not show up in the sputum and could evade detection.

But the most pressing issue is DMN-Tre’s usability in the field. So far, the method has been tested in 16 patient samples, all of which turned up positive for TB. During the analysis, DMN-Tre staining proved to be rapid and efficient for detecting mycobacteria in patient samples without the need for multiple washing.

The results look promising to Datta but she has a few reservations. For their field analysis, the scientists first decontaminated and centrifuged the sputum samples before staining them with DMN-Tre. “Both these steps – decontamination and centrifugation – kill other bacteria more than they affect mycobacteria, and can concentrate the TB pathogen in the sample,” she explained. So this in itself adds to the test’s success by eliminating other contaminating bacteria.

But since centrifugation and decontamination both require sophisticated equipment, the method may not be as successful in settings with basic clinical resources, per Datta.

T. Jacob John, an emeritus professor at Christian Medical College, Vellore, echoed the sentiment. While he agreed that DMN-Tre has a few potential advantages over traditional staining techniques, he said that larger tests would have to be conducted, and their results evaluated against the ease of conducting them in ordinary labs at low costs. “Only if these conditions are fulfilled will this method become popular and be recommended for wider use,” he said.