A Hydrogen-Based Superconductor First Predicted in 1968 Comes to Life

The work of Eremets & Drozdov was indirectly assisted by a group of Chinese researchers in 2014, who were able to anticipate hydrogen sulphide’s superconducting abilities using the BCS theory. 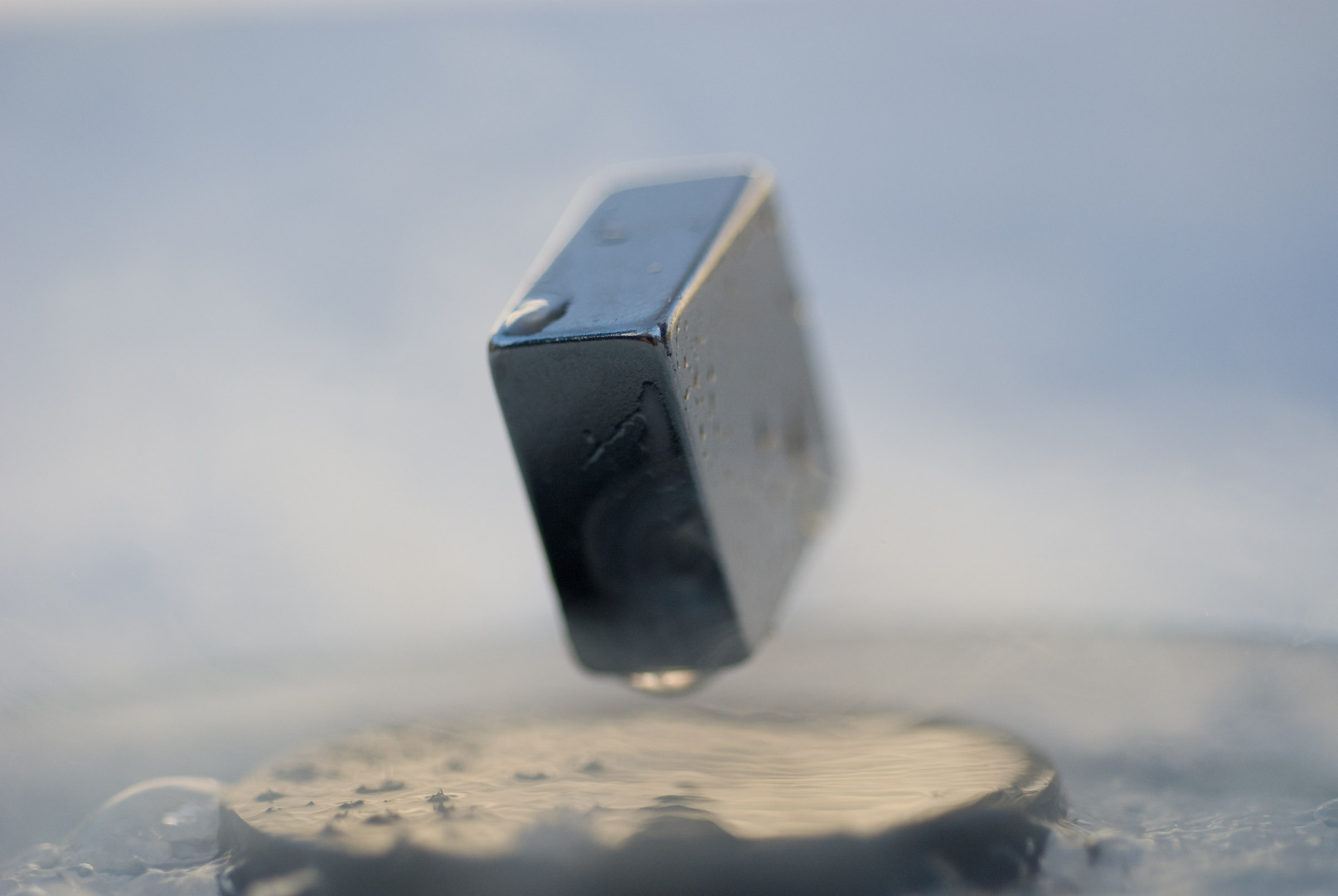 A magnet levitating on top of a superconductor. Credit: Wikimedia Commons

The next time you get a whiff of rot in your morning’s eggs, you might not want to throw them away. For what you’re smelling could, under the right conditions, be a superconductor. And that’s got the scientific community in a frenzy.

The source of excitement is a paper published in Nature on August 17, penned by a group of German scientists, describing an experiment in which the compound hydrogen sulphide conducts electricity with zero resistance under a pressure of 90 gigapascals (about 888,231-times the atmospheric pressure) – when it turns into a metal – and at a temperature of 203.5 kelvin, about -70.5° C. The discovery makes it an unexpected high-temperature superconductor, doubly so for becoming one under conditions physicists don’t find too esoteric.

The tag of ‘high-temperature’ may be unfit for something operating at -70.5° C, but in superconductivity, -70.5° C approaches summer in the Atacama. When the phenomenon was first discovered – by the Dutch physicist Heike Kamerlingh Onnes in 1911 – it required the liquid metal mercury to be cooled to 4.2 kelvin, about -269° C. What happened in those conditions was explained by an American trio with a theory of superconductivity in 1957.

The explanation lies in quantum mechanics, where all particles have a characteristic ‘spin’ number. And QM allows all those particles with integer spin (0, 1, 2, …) to – in some conditions – cohere into one bigger ‘particle’ with enough energy of itself to avoid being disturbed by things like friction or atomic vibrations*. Electrons, however, have half-integer (1/2) spin, so can’t slip into this state. In 1957, John Bardeen, Leon Cooper and Robert Schrieffer proposed that at very low temperatures – like 4 K – the electrons in a metal interact with the positively charged latticework of atoms around them to pair up with each other. These electronic pairs are called Cooper pairs, kept twinned by vibrations of the lattice (the more the vibrations, the better). The pair’s total spin is 1, allowing all of them to condense into one cohesive sea of electrons that then flows through the metal unhindered.

The BCS theory soon became a ‘conventional’ theory of superconductivity, able to explain the behaviour of many metals cooled to cryogenic temperatures. The German team’s hydrogen sulphide system is also one such conventional scenario – in which the gas had to compressed to form a metal before its superconducting abilities were teased out.

The team, led by Mikhail Eremets and Alexander Drozdov from the Max Planck Institute for Chemistry in Mainz, first made its claims last year, that under heavy pressure hydrogen sulphide becomes sulphur hydride (H2S → H3S), which in turn is a superconductor. At the time their experiment showed only one of two typical properties of a superconducting system, however: that its electrical resistance vanished at 190 K, higher than the previous record of 164 K.

Their August 17 paper reports that the second property has since been observed, too: that pressurised hydrogen sulphide doesn’t allow any external magnetic field to penetrate beyond its surface. This effect, called the Meissner effect, is observed only in superconductors. For Eremets, Drozdov et al, this is the full monty: a superconductor functioning at temperatures that actually exist on Earth. But for the broader scientific community, the paper marks the frenzied beginning of a new wave of experiments in the field.

Given the profundity of the findings – of a hydrogen-based high-temperature superconductor – they won’t enter the canon just yet but will require independent verification from other teams. A report by Edwin Cartlidge in Nature already notes five other teams around the world working on replicating the discovery. If and when they succeed, the implications will be wide-ranging – for physics as well as historical traditions of physical chemistry.

The BCS theory of superconductivity provided a precise mechanism of action that allowed scientists to predict the critical temperature (Tc) – below which a material becomes superconducting – of all materials that abided by the theory: the more the atomic lattice vibrated, the higher the critical temperature would be. Nonetheless, by 1957, the highest Tc reached had been 10 K despite scientists’ best efforts; so great was their frustration that in 1972, Philip Warren Anderson and Marvin Cohen predicted that there could be a natural limit at 30 K.

However, just a few years earlier – in 1968 – two physicists, Neil Ashcroft and Vitaly Ginzburg, refusing to subscribe to a natural limit on the critical temperature, proposed that the Tc could be very high in substances in which the vibrations of the atomic latticework surrounding the electrons was pretty energetic. Such vigour is typically found in the lighter elements like hydrogen and helium. Thus, the Ashcroft-Ginzburg idea effectively set the theoretical precedent for Eremets and Drozdov’s work.

But between the late 1960s and 2014, when hydrogen sulphide entered the fray of experiments, two discoveries threw the BCS theory off kilter. In 1986, scientists discovered cuprates, a class of copper’s compounds that were superconductors at 133 K (at 164 K under pressure) but didn’t function according to the BCS theory. Thus, they came to be called unconventional superconductors. The second discovery was of another class of unconventional superconductors, this time in compounds of iron and arsenic called pnictides, in 2008. The highest Tc among them was less than that of the cuprates. And because cuprates under pressure could muster a Tc of 164 K, scientists pinned their hopes on them of breaching the room-temperature barrier, and worked on developing an unconventional theory of superconductivity.

But for those choosing to persevere with the conventional order of things, there was a brief flicker of hope in 2001 with the discovery of magnesium diboride superconductors: they had a Tc of 39 K, an important but not very substantial improvement on previous records among conventional materials.

The work of Eremets & Drozdov was also indirectly assisted by a group of Chinese researchers in 2014, who were able to anticipate hydrogen sulphide’s superconducting abilities using the conventional BCS theory. According to them, hydrogen sulphide would become a metal under the application of 111 gigapascals of pressure, with a Tc between 191 K and 204 K. And once it survives independent experimental scrutiny intact, the Chinese theoretical work will prove valuable as scientists confront their next big challenge: pressure.

The ultimate fantasy would be to have a Tc is in the range of ambient temperatures. Imagine leagues of superconducting cables radiating out from coal-choked power plants, a gigawatt of power transmitted for a gigawatt of power produced**, or maglev trains running on superconducting tracks at lower costs and currents, or the thousands of superconducting electromagnets around the LHC that won’t have to be supercooled using jackets of liquid helium. Sadly, that Eremets & Drozdov have (probably) achieved a Tc of 203.5 K doesn’t mean that the engineering is accessible or affordable. In fact, what allowed them to fetch 203.5 K is what the barrier is for the tech to be ubiquitously used, making their feat an antecedence of possibilities rather than a demonstration itself.

It wasn’t possible until the 1970s to achieve pressures of a few gigapascals in the lab, and similar processes today are confined to industrial purposes. A portable device that’d sustain that pressure across large areas is difficult to build – yet that’s when metallic sulphur hydride shows itself. In their experiment, Eremets and Drozdov packed a cold mass of hydrogen sulphide against a stainless steel gasket using some insulating material like teflon, and then sandwiched the pellet between two diamond anvils that pressurised it. The diameter of the entire apparatus was a little more than a 100 micrometers across. Moreover, they also note in their paper that the ‘loading’ of the hydrogen sulphide between the anvils needs to be done at a low temperature – before pressurisation – so that the gas doesn’t decompose before the superconducting can begin.

These are impractical conditions if hydrogen sulphide cables have to be handled by a crew of non-specialists and in conditions nowhere near controllable enough as the insides of a small steel gasket. As an alternative, should independent verification of the Eremets & Drozdov experiment happen, scientists will use it as a validation of the Chinese theorists’ calculations and extend that to fashion a material more suited to their purposes.

*The foundation for this section of QM was laid by Satyendra Nath Bose, and later expanded by Albert Einstein to become the Bose-Einstein statistics.

**But not a gigawatt of power consumed, thanks to power thefts to the tune of Rs.2.52 lakh crore.