With a woman prisoner testing positive for coronavirus at Byculla prison, a look at the rise in cases in Maharashtra's overcrowded state prisons.

Mumbai: Contrary to the claims made by the Maharashtra home and prisons department that utmost care has been taken to save prisons from COVID-19 outbreak, cases of infection have been on the rise in state prisons.

Days after 103 persons – 77 prisoners and 26 prison staff – tested positive for coronavirus infection at Arthur Road central prison in Mumbai, two more persons – one prisoner and one doctor – have been reported to be infected in Byculla Women’s Prisons.

The prisoner, a 54-year-old woman – had undergone the test twice. While her first test showed a negative result, the subsequent test has come out positive. Prison officials confirmed that she was taken to the state-run JJ hospital after she showed signs of acute breathing problems. “She has been moved to St George hospital right now,” a senior prison official attached with the Byculla prison said. Similarly, another medical officer, who the prison authorities claim to have not reported to work for over 20 days has also tested positive.

As on March 31, Byculla prison had 352 prisoners as against its actual capacity of only 200 prisoners, which translates to an occupancy rate of a whopping 176%. Although it has been designated as a special prison meant to only accommodate female prisoners, male prisoners – arrested for petty crimes –  are also lodged at a single ward built inside the prison premise.

However, after the Supreme Court’s order to decongest prisons across the country, nearly 147 prisoners have been released from Byculla prison, member secretary of Mumbai district legal service authority (DLSA) Yatin Game confirmed.

Among those lodged at the Byculla prison includes civil rights activist and lawyer Sudha Bharadwaj and retired professor of Nagpur University Shoma Sen. Both women have been booked under the stringent Unlawful Activities (Prevention) Act for their alleged role in the Elgar Parishad case handled by the NIA. 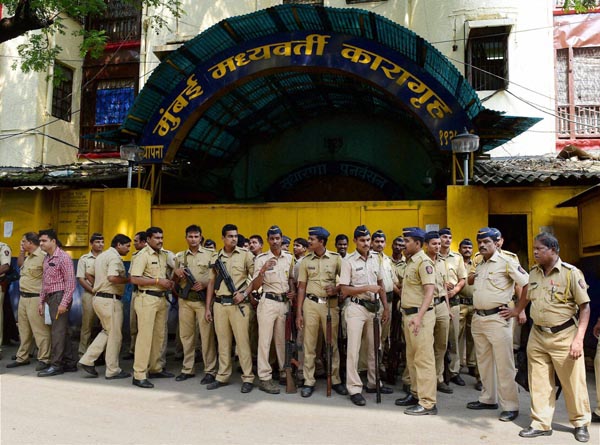 The concern right now is of the 26 children, all between 0- 6 years of age, who have been lodged with their mothers in the jail. These children, since the lockdown started, have been moved to a separate ward with their parents, the prison authorities have claimed.

In 2006, the Supreme Court had issued guidelines in the RD Upadhyay vs State of AP case to ensure that certain basic standards are observed with regard to children of women prisoners. The court had observed that although prison is no place to raise a child, they may have to stay in jail for no fault of their own. Given their reasoning that children should not be separated from their mothers in their formative years, especially when there are no close family members willing or available to take care of them, the court had said that children should be allowed to stay with women prisoners till the age of six, but not after that.

The state, however, had to ensure that the fundamental rights of children in prison is protected and they are entitled to food, shelter, medical care, clothing, education and recreational facilities as a matter of right.

The situation that most children are exposed to right now is a matter of concern, Vijay Doiphode, chairperson of the Child Welfare Committee (CWC) in Mumbai city said. “Children can at no cost be kept in such unsafe place. Special arrangement needs to be made to move both children and their mothers to a safer space on an urgent basis,” Doiphode said.

Since the lockdown was imposed, most prisons in the state had stopped taking in new prisoners. Even then, the cases have only spiked. Besides Byculla, in Kalyan district jail, around 16 children are lodged with their mothers. In all, there are at least 100 more children across the state prisons.

State of women’s prisons in India

Though Maharashtra has 60 prisons, it has only one prison specially designed to house female prisoners. In all, there are just 24 women jails with a total capacity of 5,593 prisoners across 15 states and union territories. Since special women prisons are sparse, most women prisoners are lodged in a small confined space run for male prisoners. The prison systems are structured and run with male prisoners at the centre and most arrangements, however deficient, are made to suit them, while women prisoners’ needs are invariably overlooked.

The high-power committee, constituted following the apex court order on March 16, has met four times so far, twice in the month of March and two times in April. The committee, headed by the sitting judge of the Bombay high court A.A. Sayed, is scheduled to meet on May 11. DLSA member secretary Game said that women and children is one of the concerns that will be taken up in the next meeting.

“We are trying to device newer ways to get more women, especially those with children, released,” Game said.

Women in maximum cases are booked as the co-accused for aiding or helping their male counterparts in a crime. “These women are mostly dependent on the male members of the family who are already incarcerated in another prison. Also, most women in Mumbai’s prison are from other district or in some cases even from other states. It is a practical problem right now,” Game added.

Efforts made to decongest state prisons so far

The state home minister had claimed that at least 11,000 prisoners would be released on emergency bail and parole to decongest state prisons. However, so far only 5,500 prisoners have been released. Of them, 1,300 have been released from just four jails in Mumbai – Arthur Road central prison, Byculla Women’s Prison, Thane Central Prison and Taloja Central prison. The state home department is yet to decide on the release of convicted prisoners.

In all, Maharashtra has 60 prisons with a capacity of 24,032 prisoners. At the end of March, over 36,000 people were lodged in prisons across the state. Among them, Arthur Road central prison remains one of the most crowded, with close to 2,800 prisoners when the prison capacity is only of 804 people.

On March 23, the Arthur Road prison superintendent N.B. Vaychal had raised concerns over the increasing load in his prison. In a letter written to the Chief Metropolitan Magistrate, Vaychal had said that over 3,700 prisoners have been lodged in a space for 800 persons and it is becoming difficult to handle the burden, more so at the time of a global pandemic. He had sought for an arrangement of urgent bail for those booked under petty offences, and “temporary bail” for those booked under grave charges.

The letter, however, was not acted upon. Instead, some prisoners were moved to Taloja Central Jail. 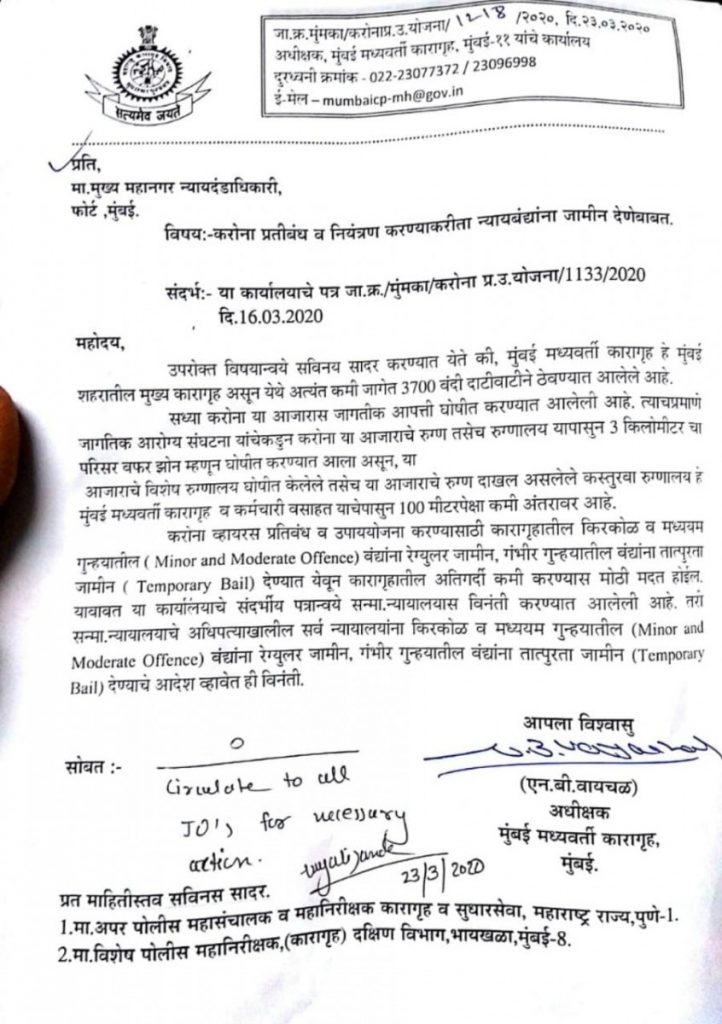