"We recognise that every human being has a right to life. Our rage cannot give way to what are, in no uncertain terms, new cycles of violence." 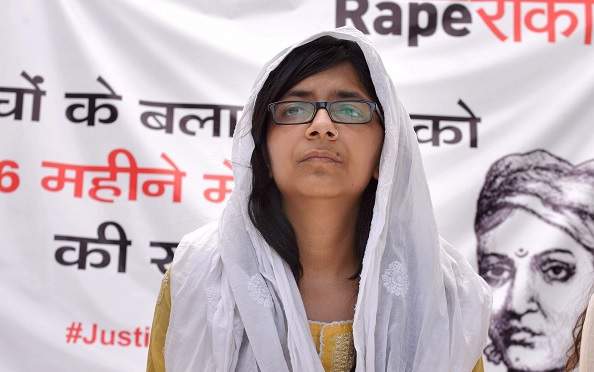 New Delhi: A group of lawyers, activists, journalists and other civil society actors have written to Swati Maliwal, chairperson of the Delhi Commission for Women, to ask her to withdraw the indefinite hunger strike she has called to demand the death penalty for those who rape minor girls.

Even as the signatories supported her protest  at the recent gangrape and murder of an eight-year-old girl in Kathua, they asked her to withdraw her hunger strike on “both on humanitarian and substantive grounds”. The activists, in their letter to Maliwal, have expressed their strong opposition to death penalty as a form of punishment.

Maliwal has been on a hunger strike for seven days now.

“We are deeply troubled about the nature and theme of your campaign #RapeRoko that you have initiated since last year. At this juncture we would like to point out that in your capacity as Chair of a Statutory Body, it is essential that you understand and engage with the in-principle opposition that many representatives of the women’s movement have against death penalty,” the group, including lawyers Vrinda Grover and Indira Jaising, CPI(ML) leader Kavita Krishnan, CPI leader Annie Raja and others.

They then go on to detail why they are against the death penalty and do not think it is a good deterrent to rape.

“We recognise that every human being has a right to life. Our rage cannot give way to what are, in no uncertain terms, new cycles of violence. We refuse to deem ‘legitimate’ any act of violence that would give the State the right to take life in our names. Justice meted by the State cannot bypass complex socio-political questions of violence against women by punishing rapists by death. Death penalty is often used to distract attention away from the real issue – it changes nothing but becomes a tool in the hands of the State to further exert its power over its citizens. A huge set of changes are required in the system to end the widespread and daily culture of rape.

There is no evidence to suggest that the death penalty acts as a deterrent to rape. Available data shows that there is a low rate of conviction in rape cases and a strong possibility that the death penalty would lower this conviction rate even further as it is awarded only under the ‘rarest of rare’ circumstances. The most important factor that can act as a deterrent is the certainty of punishment, rather than the severity of its form. NCRB data reveals sharp increase in cases of rape of children by over 82% as compared to 2015. The concern remains that the conviction rate for rapes has been as low as 18.9% in 2016, indicating the high degree of impunity enjoyed by perpetrators of sexual violence in a decade.

An overwhelming number of minors are sexually assaulted by people known to them, and often include near or distant family, friends and partners. Who will be able to face the psychological and social trauma of having reported against their own relatives?

Furthermore, with death penalty at stake, the ‘guardians of the law’ will make sure that no complaints against them get registered and they will go to any length to make sure that justice does not see the light of day.

As we know, in cases of sexual violence where the perpetrator is in a position of power conviction is notoriously difficult. The death penalty, for reasons that have already been mentioned, would make conviction next to impossible.

More importantly in the highly polarized and communalized context we are in, one should recognize the stark reality sexual violence including rape is assuming more horrific and devastating forms. This is compounded by the hate or the ‘us vs. them’ phenomena that breeds on societal bias and prejudice. In such order of crime, you will agree that we need complete probity to ensure that we not only prove the crime but the insidious hate and prejudice that creeps into the core intent of the dastardly and heinous act. All this requires the highest standards of investigation, which you will agree is most often compromised with and when as in the case of Kathua, no stone was left unturned to get to the ‘truth’ and unveil the ugly dimensions of hate crime, it has been undermined and contested by those who are trained and tasked with the responsibility to uphold the rule of law.

In fact, often times, the demand for death penalty takes attention away from the gravity of the real issue: that of ensuring that institutions charged with responsibility to end violence, undertake systemic reforms and measures to dismantle patriarchal social norms that result in gender and other forms of inequalities.”

It is swiftness of punishment rather than severity that should be the focus, the activists have said. They have urged Maliwal to think through their arguments and withdraw her fast. “We urge you to continue building the mandate and outreach of the Delhi Commission for Women, and to ensure effective and timely response to every victim of violence in Delhi; to undertake gender and sex education in all schools of Delhi; and designing campaigns and consultations to end sexual violence in the state of Delhi. We also urge you to work in close coordination with the State Commission on the Rights of the Child and bring about synergies in the administrative responses to the issue. This is a priority and can best be served if the Chair continues to dedicate herself to the several tasks at hand,” they conclude.