Voices Like Gauri Lankesh Will Not Be Allowed to Defy, That Is Why She Had to Be Killed

Gauri Lankesh, and others like her, will not be left alone to keep on articulating their dissent. After all, it is the untamed individual voice that is found to be particularly irritating. 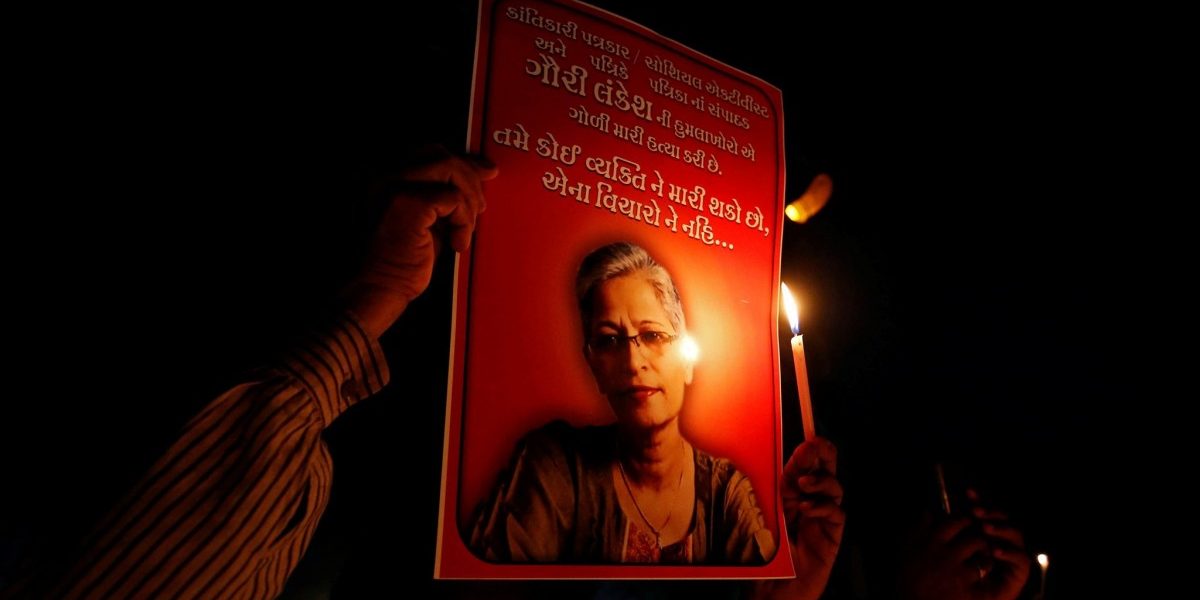 Note: This article was first published on September 8, 2017 and is being republished in the light of United Nations declaring November 2 as the International Day to End Impunity for Crimes Against Journalists.

Perhaps we will never know who killed Gauri Lankesh, but maybe we can make a reasonable guess as to why she was killed. Or rather, we can be fairly certain as to why she had to be killed. Come to think of it, there is no mystery to it. Nor anything complicated about it either. She had to be killed because she had become an eyesore and in our new India, we are no longer inclined to tolerate eyesores.

Of course, there is the local context. But remember, all politics is local. Outside the limited media fraternity, Gauri Lankesh was not all that well known. On the national stage, she sounded like a very distant and a very small voice in the company of big megaphones. But her voice was indeed heard – and indeed, resented – within the Kanadiga ecosystem of fundamentalism and its political demands. And this political ecosystem has been experimenting with a new grammar of intimidation and coercion: shut up or be prepared to be simply silenced. An inconvenient voice is jarring – and unacceptable – to the new overseers of the new India.

It may still be argued that the charioteers of the Hindutva juggernaut need not have bothered themselves with a relatively obscure voice. After all, the Hindutva project is a divinely blessed enterprise and the presumed spiritual and religious nobility of its journey itself is so self-evident that no one has to feel distracted by a few pseudo-secular dissenters. Let them waste their breath and energy, we move on.

Yet, Gauri Lankesh was very much resented. Voices like hers could not be left alone to keep on articulating their dissent. After all, it is the untamed individual voice that is found to be particularly irritating. Even on social media, we generally reserve our most venomous rebukes and scorns for individual voices. How dare these individual voices question the official line? And, the resentment acquires a sharp edge, especially when the autocrat’s authority has found it so easy to tame the much bigger corporate media.

Without much effort, the corporate media – print and electronic – has been made to see the wisdom of not annoying the new sultans of the new India. Our new saviours know the nature and extent of resources and deep pockets that enable the corporate media to buy for themselves an unprecedented nationwide presence; and it is this very vastness that also renders it organisationally and professionally vulnerable to the danda’s gentle poke. In the new India, there is no inhibition about tapping the state instruments and their enormous coercive reach against anyone who does not fall in line – it may be a political leader (rival or ally), a businessman or a journalist.

The corporate media has eagerly subscribed to the logic of “one nation, one tax, one leader and one voice”. This logic comes wrapped up in the deshbhakti colours; and given our perennial conflicts and standoffs with Pakistan and China, we are never short of occasions and provocations to feel good about waving the flag vigorously and even, menacingly. So much so, after the massively dislocating demonetisation, influential sections of the corporate media had reduced themselves to be the government’s unpaid voice. 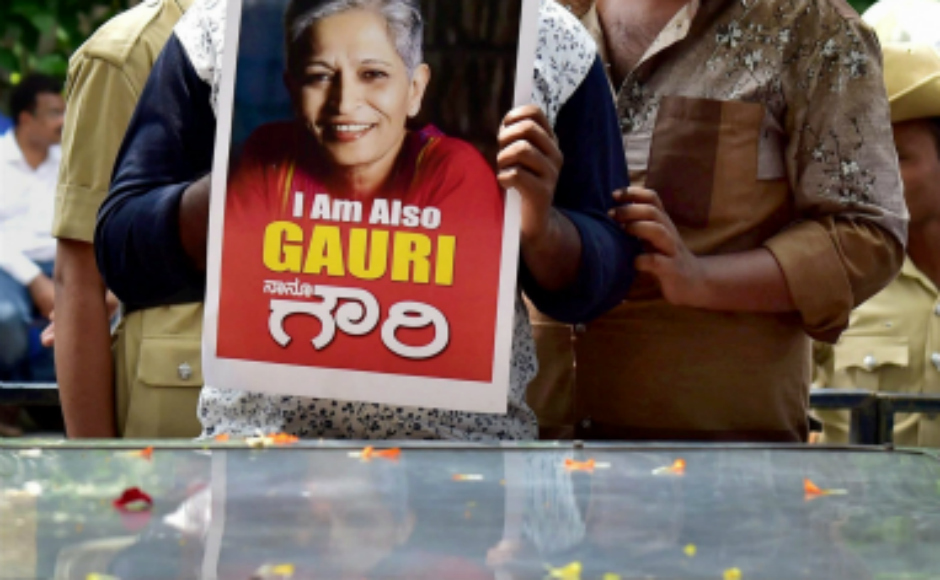 Protests over the killing of Gauri Lankesh in Karnataka. Credit: PTI

In fact, it can be suggested that there is a new media to suit the temperament and expectations of the new India. Never before has the Indian media redefined its role – from someone charged with the obligation to keep a sharp eye on the powers-that-be to a vicious breaker of the opposition’s ranks and morale. Instead of questioning the government’s very doubtful claims – from demonetisation to Doklam – the corporate media has taken it upon itself to shut up the critic and the dissenter.

The ruling establishment believes, like General Sam Manekshaw, that once it has captured the headquarters (Dacca, Chittagong), the villages will easily give up. But there is resistance in villages. And a Gauri Lankesh mocks at this very controlling strategy. Something has to be done to bring these pockets of resistance to their knees. The regional subedars feel emboldened, empowered by the sultan’s licence, to do something about this or that Gauri Lankesh. In her death, Gauri Lankesh becomes a metaphor.

A million atrocities – and a million mutinies – take place every day across the length and breadth of this vast land. These may be small and insignificant insurgencies and indeed, rarely make it to the front pages of even the regional press; yet these acts of defiance and anger do take place because the iniquitous local power structure insists on and often manages to extract submission and compliance.

And then, there are millions and millions of citizens who believe in the old India and its old Nehruvian values and ideas; they may not be able to articulate their thoughts in a shouting debate in television studios, but they do live out the practices of pluralism and secularism in village after village and mohalla after mohalla.

The Gauri Lankesh model gives voice and legitimacy to that tradition of dissent and disagreement and that is why it has to be confronted and dismantled, if necessary, by force. When the famous, the glamorous and the familiar faces on the so-called national television can be tamed or converted, who is this two-bit of a woman refusing to fall in line! If she refuses to appreciate the great national renewal and monumental progress that new India has brought about, she must be silenced.

This is a familiar temptation. The itch to silence and control is part of the medieval rites of power and authority. All that Henry II had to do was to whisper aloud “will no one rid me of this turbulent priest?” and some loyalists took it upon themselves to silent permanently the meddlesome priest, the Archbishop of Canterbury. That, as we know, was in 1170. Since then, the art of getting rid of this or that turbulent priest has been finessed many times over.

In the modern times, the autocrat has invoked the support and endorsement of the masses as a licence to liquidate the “enemy” of the people – or, anyone who is deemed to stand in the way of “progress”. And now, in this digital age, the new intrusive technology has given the overseers of the new India a sense of robust empowerment about their ability to calibre events and control individuals in even distant places. Little voices like that of a Gauri Lankesh will not be allowed to defy. That is why she had to be killed.