We Have Cleared Path but Delhi Police Put Up Barricades: Tikait on SC Order to Unblock Roads

"We have cleared our belongings but the public is suffering because of the police," the Bharatiya Kisan Union national spokesperson told a TV channel at UP Gate. 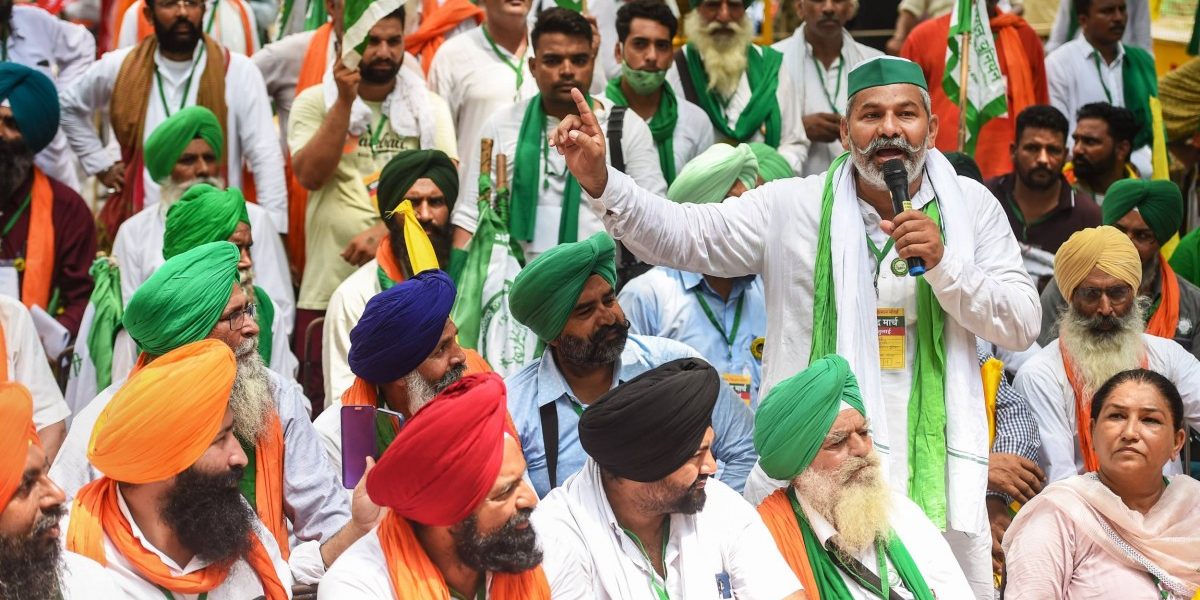 Ghaziabad: The Bharatiya Kisan Union (BKU), whose supporters and office-bearers led by Rakesh Tikait are camping at Ghazipur on the Delhi-Uttar Pradesh border since November 2020, on Thursday said the barriers at the protest site have been put by the Delhi Police and not farmers.

Tikait, the national spokesperson of the BKU, said protesters at Ghazipur have cleared the path on a service lane leading to the national capital but the Delhi Police’s barricades were still present there.

The influential farmers’ outfit, which is part of the Samyukt Kisan Morcha (SKM), also trashed reports of vacating the Ghazipur border that emerged in the wake of a Supreme Court order for ending road blockades at protest sites.

He said the protesters want to go to Delhi if the police lifted the blockade.

“We have cleared our belongings but the public is suffering because of the police,” Tikait told a TV channel at UP Gate.

Earlier, several protesters at Ghazipur were seen trying to remove the metal barricades which are chained together, and tractors parked on roads taken aside in the wake of the top court’s observation.

BKU media in-charge Dharmendra Malik said, “By removing tents and other belongings, we have shown that it’s not the farmers who are blocking the road to Delhi.”

He added that the protest will continue.

The bench made the observation while hearing a public interest lawsuit by Noida resident Monicca Agarwal who complained of delays in daily commute due to the protesting farmers blocking roads.

The court has asked farmer unions to respond to the PIL within three weeks.

Hundreds of farmers have been encamping on the Delhi borders at Singhu, Tikri and Ghazipur since November 2020, demanding the repeal of three farm laws and a legal guarantee to retain minimum support price for crops.

Key roads connecting Delhi with Haryana and Uttar Pradesh have remained impacted ever since the protests began amid the continued stalemate between the Centre and protesting farmers over the central laws.

Watch | Can the Killing at Singhu Weaken the Farmers’ Movement?

“We respect the Supreme Court’s directive. We would also like to make it clear that it was the Delhi Police which had set up barricades at the protest site. We also demand that the Delhi Police should remove them now for public welfare,” Saurabh Upadhyay, a BKU spokesperson, told PTI.

“Whether Delhi or Haryana, Rajasthan, Uttar Pradesh, nowhere have farmers barricaded any roads. Farmers do not have the power to barricade roads but police do,” Upadhyay said.

On purported pictures and videos on social media claiming removal of tents at the Delhi-Meerut Expressway (NH-9) in Ghazipur, the BKU office-bearer said earlier in the day that such reports were false rumours.

“There is nothing like that. We have just removed one tent which was located on a service lane towards Delhi under the flyover on NH 9 at the UP Gate. The barricading put up by Delhi Police still exists on the lane,” he said.

“Farmers are going nowhere from the border until the demands are met. The onus of removing barricades is on the police,” he added.

Asked if farmers would continue to sit on the expressway, Upadhyay said even the Supreme Court has observed that peaceful protest is a right of citizens.