Initial reports said there was an accidental leak of the styrene gas at the LG Polymers manufacturing plant at around 4 am on Thursday. 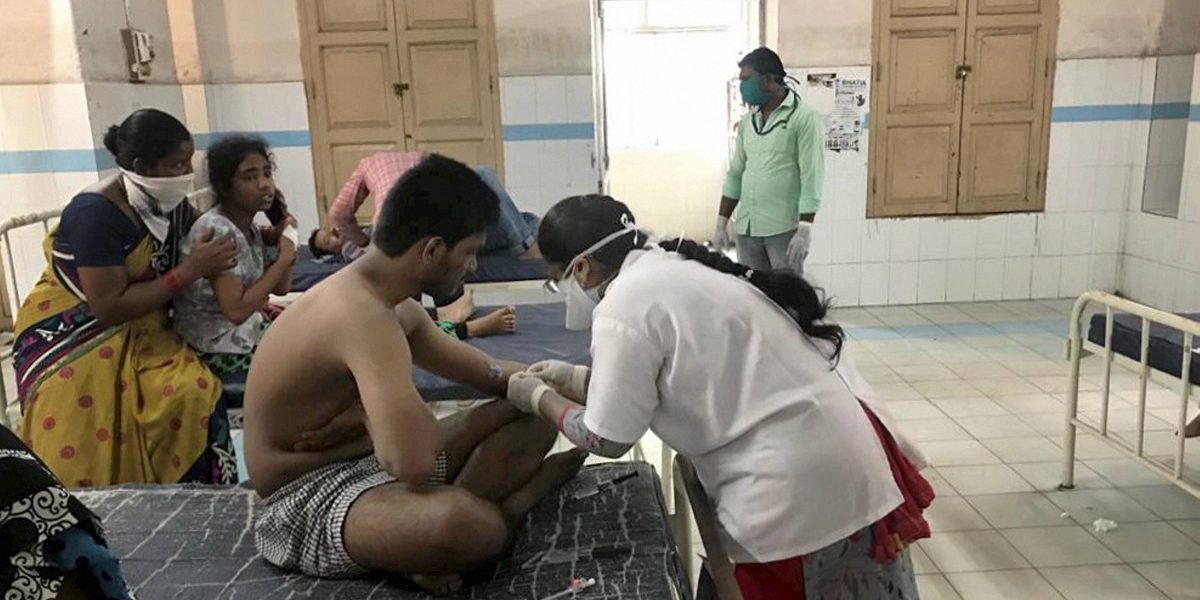 People being treated at a hospital after a major chemical gas leakage at LG Polymers industry in RR Venkatapuram village, Visakhapatnam, Thursday, May 07, 2020. Photo: Videograb via PTI

New Delhi: At least 11 people, including a child and two senior citizens, were killed and more than 5,000 people fell sick after a styrene gas leak at a chemical plant in Andhra Pradesh’s Visakhapatnam in the wee hours of Thursday.

People in the Gopalapatnam area, where the LG Polymers chemical plant is located, complained of irritation in eyes, breathlessness, nausea and rashes on their bodies. Many people have fallen unconscious on the roads while fleeing, according to news reports.

Local revenue official B. V. Rani said she got a call at around 4 am on  Thursday from a panicking police sub-inspector near the facility. “He asked me to come to the spot immediately,” Rani told Reuters. When Rani went there, she saw that people had collapsed unconscious in the village adjoining the 60-acre site of the plant.

“I personally helped more than 15 people get to an ambulance who had tried to run away from the village but dropped down a few metres away,” she said.

Gopalapatnam circle inspector Ramanayya told the Times of India that at least 50 people were found in an unconscious state, adding that “reaching the area has become very difficult”. Police have asked that people leave their houses and “go to safer places”.

According to The Hindu, people living in a five-kilometre radius have been affected.

There have been 7 casualties so far, one of them fell into well while trying to escape. #VizagGasLeak occurred at around 3:30 am today morning. The evacuation operation is still underway. The plant was shut due to the countrywide lockdown: Andhra Pradesh DGP, DG Sawang to ANI. pic.twitter.com/ua4wT6PWwZ

“Hundreds of people have inhaled it and either fell unconscious or having breathing issues,” Srijana Gummalla, commissioner, Greater Visakhapatnam Municipal Corporation said on Twitter.

Swarupa Rani, an assistant commissioner of police in Visakhapatnam told Reuters that at least nine people had died and between 300-400 hospitalised. Another 1,500 people had been evacuated, mostly from a neighbouring village.

Areas within an approximately three-kilometre radius of the plant were vulnerable, the municipal corporation said in a tweet. Cross-referencing maps of the affected area, there is at least one coronavirus containment zone in the neighbourhood.

The LG Polymers plant makes polystyrene products, according to a company website, which are used in manufacturing electric fan blades, cups and cutlery and containers for cosmetic products such as make up. The raw material, styrene, is highly flammable and releases a poisonous gas when burnt.

Chief minister Y.S. Jagan Mohan Reddy has directed the Visakhapatnam district collector to ensure proper medical care for the affected people. After visiting the city, he has announced ex-gratia of Rs 1 crore to families of each of the deceased.

According to Business Standard, initial reports suggest as many as 3,000 people were evacuated to safe places and at least 250 were admitted to various hospitals.

Vizag collector Vinay Chand said the administration rushed ambulances and other vehicles to evacuate people soon after it got the information at around 4 am.

In an interview with NDTV, S.N. Pradhan, director general of the National Disaster Response Force, said the situation is now under control at the site. “The gas leakage has been stopped and the quantities should now be more manageable and we should be able to evacuate people to safety,” said Pradhan.

WATCH | “As of now, the gas leakage has stopped but a lot of people have been hospitalised and are in a semi-unconscious state. Many of them are facing breathing problems, skin irritation”: SN Pradhan, DG, NDRF. #VizagGasLeak pic.twitter.com/EjehT8B0j9

The Gujarat government has decided to send 500 kg of Para-tertiary butyl catechol (PTBC) chemical to Daman, from where it will be airlifted by the Andhra Pradesh government to neutralise the gas leakage, according to Ashwani Kumar, the secretary to Gujarat chief minister Vijay Rupani.

Established in 1969, the LG Polymers manufacturing plant had been shut for the past 40 days due to the nationwide lockdown in force to prevent the spread of coronavirus. It produces hypol and EPS polymers, polystyrene, expandable polystyrene and other styrene polymers, according to the company’s website. LG Chem’s Indian subsidiary had taken over this plant some 15 years ago.

The leakage of gases is believed to have taken place when the plant’s employees were preparing to reopen it following some recent relaxations announced by the government.

Chronic (long-term) exposure to styrene in humans is expected to result in effects on the central nervous system (CNS), such as headache, fatigue, weakness, depression and CNS dysfunction, hearing loss and peripheral neuropathy.

South Korea’s LG Chem , the owner of the plant, said in a statement that the gas leak has been brought under control and the company is investigating the cause of the deadly accident and the extent of the damage,

LG Chem said it was seeking to ensure casualties received treatment quickly. It said the gas emitted in the leak can cause nausea and dizziness when inhaled.

The South Korean ambassador to India also released a statement, saying he was “shocked and saddened” by the news. “This was a highly unfortunate incident and our deepest condolences go out to those affected by this tragic event. We pray for the speedy recovery of those who have been taken ill,” Ambassador Shin Bong-kil said.