In a video making the rounds on social media, the attackers, one of whom recorded the entire assault, are seen forcing Mahatma Gandhi Central University assistant professor Sanjay Kumar to take a pledge that he would never write or say anything critical about BJP or its leaders. New Delhi: Following the assault on Sanjay Kumar on August 17, an assistant professor at the Mahatma Gandhi Central University (MGCU) in Motihari, Bihar, a new video has surfaced on social media which indicates that the assaulters may be affiliated to the Sangh parivar or could be its sympathisers.

In the video, the attackers, one of whom filmed the entire assault, are seen forcing Kumar to take a pledge that he would never write or say anything critical about Atal Bihari Vajpayee or other leaders.

Kumar was part of a teachers association that had been protesting against the the university vice-chancellor’s alleged “high-handed” administration for the last few months. On August 16, he had commented on Facebook about former prime minister Atal Bihari Vajpayee’s death that said, “Fascivaad ka ek naye yug ki samaapti, Atal ji anant yatra pe nikle (The end of one era of Fascism, Atal Bihari Vajpayee embarks on his final journey).”

Following this, he became the target of organised trolling on social media, with many threatening and abusing him. A day after, he was assaulted brutally and is currently admitted in the Patna Medical College and Hospital, where he is reported to be in a critical condition.

In the video, one of the assaulters ask Kumar to repeat these words after him, “Main Atal ji ka hardik dil se samman karta hoon aur iske baad kisi bhi bade neta ke jo bharat ratna se sammanti hai waise kisi bhi neta ke virodh mein facebook post nahin karoonga. Main sabhi bharatvaasi se maafi mangta hoon ki iske baad aisa nahin hoga (I respect Atalji from the bottom of my heart and after this, I will never post any critical comment against any big leader who has been awarded a Bharat Ratna. I apologise to all Indians and promise that after this, I will not do such a thing again).”

The incident, which came on the heels of the assassination attempt on the media-vilified student of JNU, Umar Khalid, has galvanised a large section of people who believe that dissenting voices are violently being suppressed by from those who practice Hindutva majoritarian politics. Teachers associations of Indian universities have taken strong objection and expressed shock at the incident. 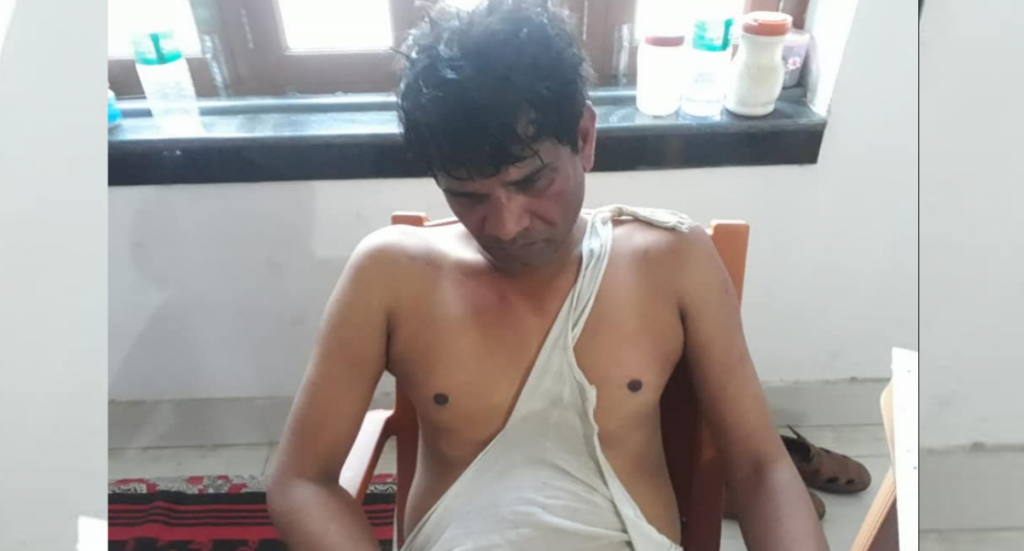 Attacking the Nitish Kumar-led Janata Dal (United)-BJP state government, the Jamia Teachers’ Solidarity Organisation (JTSA), in a letter to the chief minister said, “Sir, if open intimidation and violence, if silencing of critical voices, and this sense of power and impunity enjoyed by a section, is not Jungle Raj, what is?”

Similarly, the JNU teachers association, which too is contesting many administrative decisions taken at university, also said, “This is not the first instance in the recent past when a teacher has been targeted in some manner for holding a difference of opinion with the university administration or the ruling regime. It appears that the fast spreading nationwide phenomenon of mob lynching has now reached university campuses in the country. It is clear from the incident that the university administration has failed in its duty of providing a safe environment to – and at the minimum, protecting the life of – its faculty members.”

It further demanded a CBI enquiry into the matter and urged the higher education regulatory body, the university grants commission, to intervene immediately.

A signature campaign initiated by the academic community is also doing the rounds. It says that although the immediate trigger for the attack is being cited to be a social media post, the “real reason for this attack is the sustained and fearless opposition that the teachers of MCGUB have shown to the corrupt and authoritarian conduct of the university’s Vice-Chancellor, Arvind Kumar Agarwal.”

The letter further states,, “Like many other teachers of the university, Mr. Kumar has been actively involved in the university community’s protests that have been held for nearly a year now. MGCU Vice Chancellor has been charged with a range of wrongdoings — ranging from illegal termination of permanent faculty members, quid pro quo appointments, financial embezzlement and failure of the university to make regular payments to the New Pension Scheme, violation of reservation policy in recruitment of staff, implicating faculty and students in false cases, to partisan and authoritarian conduct that actively rouses public animus and hostility to the university teachers. No action has been taken against the VC on any of these issues, and now teachers like Sanjay Kumar have been brought to death’s door by forces whose interests are undoubtedly closely aligned with the VC.”

Questioning the silence of the Bihar government on the issue, the academics wrote, “We are horrified by the manner in which the attack on Dr. Kumar was effected — through an invasion of his home by an abusive mob whose intent was to create a public spectacle of ‘punishment’.”

According to reports, Giri has surrendered to the police but the rest have not been arrested. Alleging police complicity, Mrityunjay Kumar, a faculty member of the university, said, “An attempt to set Kumar on fire during the assault is recorded on video. Yet, the police has not slapped charges of attempt to murder (IPC section 307) against the assaulters. THe FIR only cites much lighter charges.”

The JTSA also noted that “an atmosphere of intimidation and threats of violence had immediately preceded the attack.”

It asked the chief minister in its letter, “The sections under which the FIR has been filed are laughably light. Sir, we urge you to see the video and decide whether the mob attacking Sanjay Kumar with rods was merely engaging in wrongful restraint (S. 341), and a simple case of causing hurt voluntarily (S. 323).”

“By booking the attackers under much lighter charges – all of which are bailable – your administration has effectively killed the prosecution case even before it has begun. What would qualify as an attempt to murder (non-bailable S. 307) in your opinion? We are surprised at the sullen silence of the government on this murderous assault,” the teachers’ body added.

Student organisations like the All India Students Association (AISA) and All India Students Federation (AISF) too staged a protest in Patna. They believed that the assaulters enjoyed impunity as they were clearly supporters of the ruling regime and demanded their immediate arrest.