Ankita, who worked as a receptionist at Vanantara resort near Rishikesh, was killed in September allegedly by its owner Pulkit Arya and his two associates after she refused to yield to pressure to offer "extra services" to a "VIP" guest. 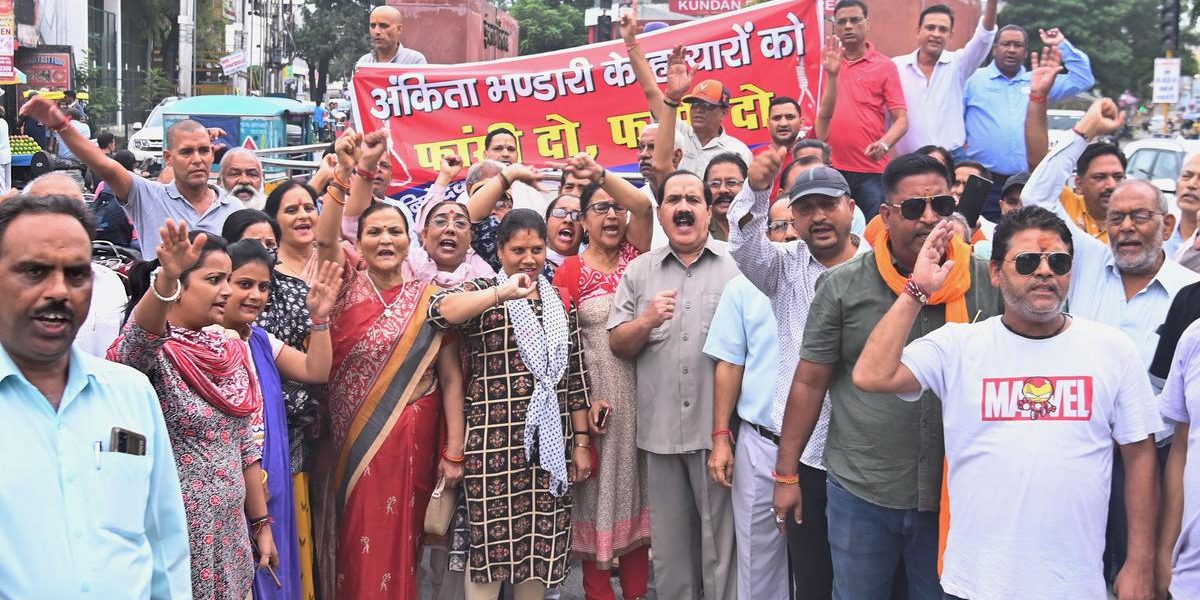 A protest seeking the death penalty for those involved in the killing of Ankita Bhandari in Uttarakhand. Photo: PTI

Dehradun: The parents of Ankita Bhandari on Tuesday held a protest in Rishikesh to demand a CBI probe into her killing.

Ankita, who worked as a receptionist at Vanantara resort near Rishikesh, was killed in September allegedly by its owner Pulkit Arya and his two associates after she refused to yield to pressure to offer “extra services” to a “VIP” guest.

Arya, who is the son of a now-expelled BJP leader, along with the other two accused in the case are behind bars.

Alleging that the SIT probing the case is under pressure to shield the guilty, Ankita’s father Virendra Singh Bhandari said he does not have confidence in the ongoing investigation and his demand for a CBI probe have fallen on deaf ears.

Bhandari and his wife joined the ongoing stir in Rishikesh by a social organisation called Yuva Nyay Sangharsh Samiti to demand justice for Ankita and sat on a dharna along with the activists.

The Samiti has been holding the sit-in and observing a relay fast in the Koyal Ghati area of Rishikesh for more than a month.

“Evidence in the case was promptly destroyed just a day after the crime. Even the rooms in a factory adjoining the resort where the accused lived were set aflame. We don’t have confidence in the SIT investigation,” Ankita’s father said at the protest venue.

He said, “When the evidence itself has been destroyed, how would the guilty be given a stern punishment?”

Bhandari said chief minister Pushkar Singh Dhami had assured him of a trial by a fast-track court in the case, but nothing happened.

More than a month since the SIT began its investigation into the sensational murder that had triggered massive public outrage, neither a charge sheet has not been filed in the case nor has the name of the VIP been disclosed.

“The SIT is under pressure. It is shielding the guilty. Our demand for a CBI probe into the murder of our daughter has also been ignored,” Bhandari said, adding he wants a death sentence for the guilty without delay.