UP: Over 1600 Teachers Died of COVID-19 After Poll Duty for Panchayat Elections

The Uttar Pradesh Primary Teachers’ Association has sent a list of the victims to the chief minister and put forth demands including financial assistance to family members of the teachers who have died.

People show their voter ID as they stand in a queue to cast their vote for the Uttar Pradesh Gram Panchayat election, in Agra, April 15, 2021. Photo: PTI

Gorakhpur: At least 1621 teachers and support staff have so far died from COVID-19 following poll duty during the recently concluded Uttar Pradesh panchayat elections, according to information provided by the Uttar Pradesh Primary Teachers’ Association on May 16.

The Uttar Pradesh Primary Teachers’ Association has sent a list of the victims to the chief minister demanding financial assistance of Rs 1 crore and jobs to their dependents.

While the state teachers’ union had earlier released a list on April 28 saying that 706 teachers and members of the support staff had died due to COVID-19, the death toll has now more than doubled.

In the list sent to the chief minister on May 16, the teachers’ association has put forth eight demands including financial assistance of one crore rupees and jobs to the family members of the teachers, shiksha mitras, instructors and employees who have died while on poll duty.

The list submitted contains the names of the deceased teachers, the name of the school, their designation, block and district name, date of death and the mobile number of a family member.

According to this list, the highest number of fatalities of teachers and other staff members, that is 68, were reported from the district of Azamgarh, while 50 teachers have died in Gorakhpur, 47 in Lakhimpur, 53 in Rae Bareli, 43 in Jaunpur, 46 in Prayagraj, 35 in Lucknow, 39 in Sitapur, 34 in Unnao, 36 in Ghazipur, and 34 in Barabanki. In 23 districts of the state, more than 25 teachers and other staff have died due to COVID-19.

In the letter sent to the chief minister, the UPPTA has stated that in letters issued on April 12, April 22, April 28 and April 29 to the Uttar Pradesh government and the state election commission, the association had demanded postponement of the panchayat polls owing to the second wave of the COVID-19 pandemic, but their demands were ignored. 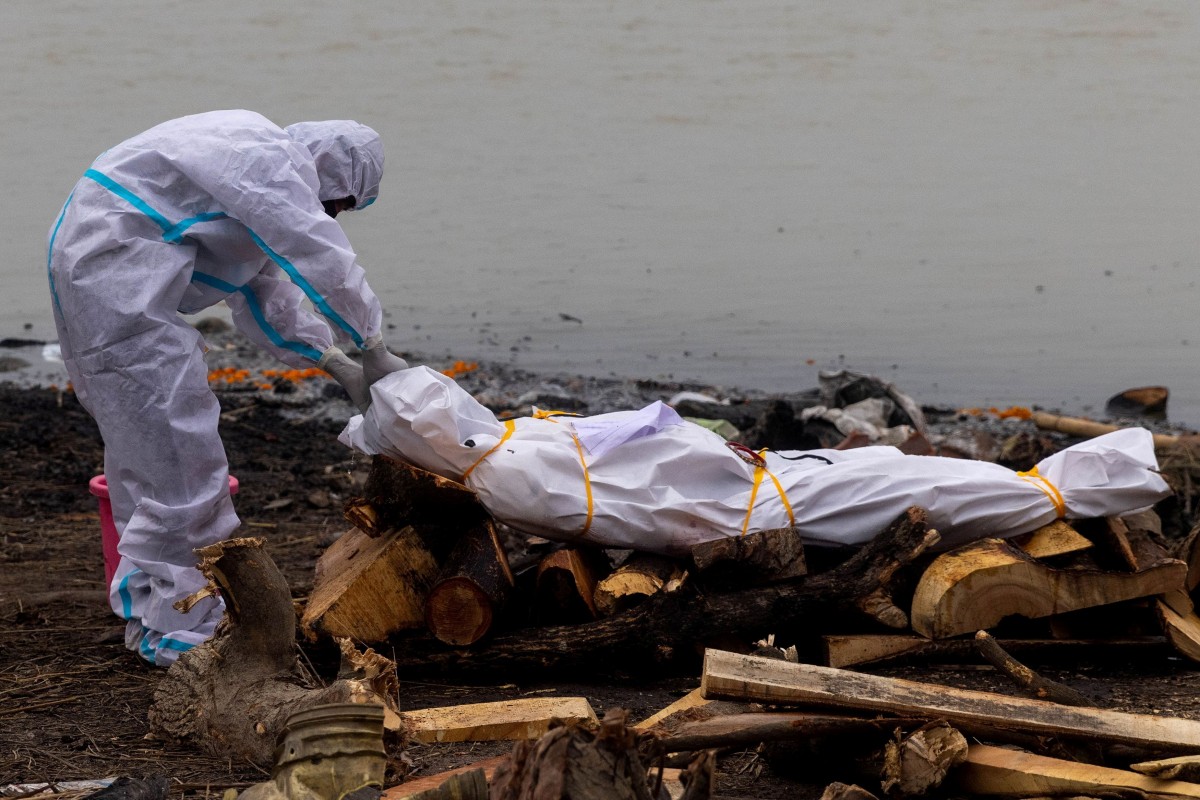 A man wearing a protective suit touches the body of his relative, who died from COVID-19, before his cremation on the banks of the river Ganges at Garhmukteshwar in the northern state of Uttar Pradesh, May 6, 2021. Photo: Reuters/Danish Siddiqui

The teachers’ association also alleged that despite the state government’s assurances that no action would be taken against sick teachers and employees who could not join duty during voting and counting, the administration in many districts did not adhere to this.

Expressing anger in the letter, the union complained that in many districts primary teachers have been deputed in Covid control rooms endangering their lives as they might contract the virus.

The association also alleged that neither the officials of the Basic Education Department nor the UP administration or the UP government representatives had issued even a single statement condoling the death of such a large number of teachers and other state government employees.

Also read: Bodies of COVID-19 Victims Among Those Found in the Ganga: UP Official’s Letter

In the letter, the association president, Dinesh Chandra Sharma, and general secretary, Sanjay Singh, pointed out how primary teachers had contributed Rs 76 crore to the chief minister’s relief fund during the first wave of the pandemic last year. The teachers had then distributed rations to the poor at ration shops and had enrolled a large number of students when schools reopened. In return, however, the government forced teachers to report to duty while the schools remained closed, compelled them to work under Operation Kayakalp, assigned them to poll duties in panchayat elections and now, they have been deputed in Covid control rooms, the letter said.

The teachers’ association has, therefore, demanded financial assistance of one crore rupees to the families of teachers who died during the pandemic, an exemption to the dependents of all the deceased teachers from the teacher eligibility examination TET who are eligible for BTC, B.Ed., D.L.Ed and appointment of such dependents to the post of assistant teacher. The dependents who do not possess the above qualifications, but who have cleared intermediate education or graduation, should be appointed to other clerical posts.

In addition, a family pension should be granted under the old pension system in force before April 1, 2005, says the letter. The letter also demands that the families of all teachers who were below 60 years at the time of death, should be granted gratuity as per the mandate. The teachers who have died as well as those who are still deputed on various duties should be declared Corona warriors. The letter also demands that the government should pay for the treatment of the Covid-infected teachers who may have recovered now after receiving treatment. The union has also asked that teachers and employees should be spared any disciplinary action for being absent from poll duty due to illness.