Courts have granted bail to many arrested persons, saying the police have not provided evidence to support its claims. 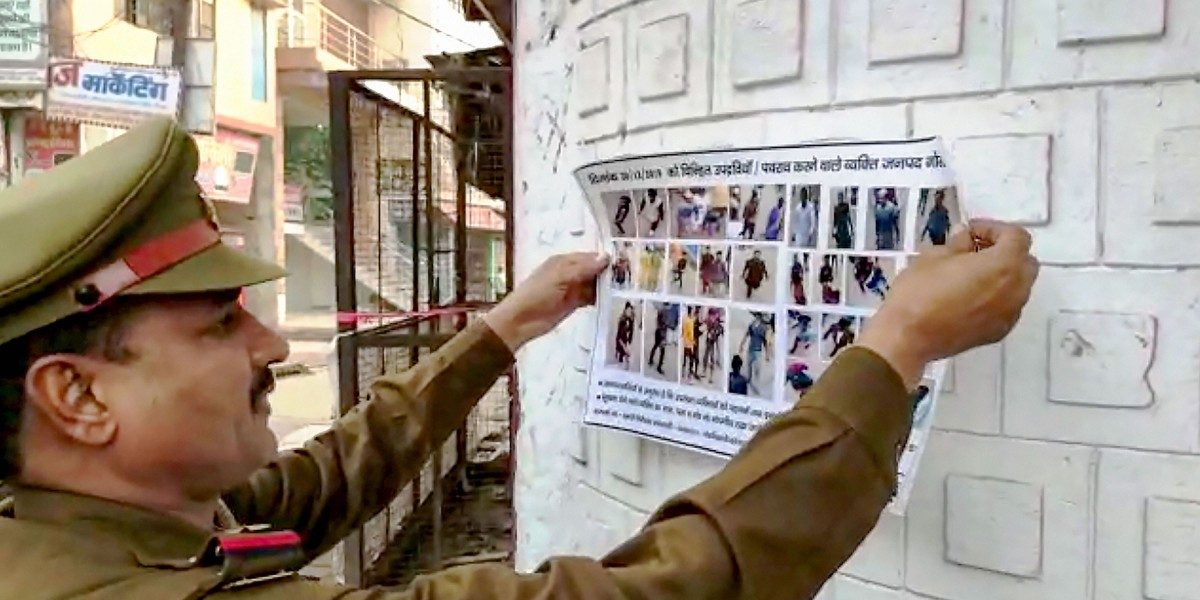 A police official puts up a 'wanted' poster after violence in Gorakhpur. Photo: PTI

New Delhi: In the cases related to the arrests of anti-Citizenship (Amendment) Act (CAA) protesters and activists across Uttar Pradesh, police have faced several setbacks in local courts over the past few weeks.

On January 24, granting bail to two persons accused of rioting and attempt to murder during the anti-CAA and National Register of Citizens (NRC) protest in the sate, additional sessions judge of Bijnor Sanjiv Pandey said, “Without making any observation on the merits of the case, in my view, looking at the circumstances and the natures of offences, bail has to be granted to the accused.”

According to court records accessed by the Indian Express the judge noted, “I have heard arguments from both sides and have also perused the case diary… only Imran, named in the FIR, has been arrested from the spot. No other accused have been arrested from the spot. The prosecution has also argued that the police official was injured during stone-pelting. However, no such evidence has been placed by the prosecution, which shows that the accused persons indulged in vandalising shops or setting houses on fire…”

The court added, “The police has shown that it has seized .315 bore bullets. However, it has not shown any seizure of weapons from any of the accused persons.” Moreover, “According to the prosecution itself, no police official has received any bullet injury. It has shown that police officials have received injuries due to stone-pelting. However, no evidence has been produced that proves that anyone received serious injuries.”

It can be noted that Bijnor was one of the worst affected districts of violence in the state and the police had arrested over 100 people, lodging multiple FIRs alleging that they participated in violence reported at Nahtaur, Najibabad and Nagina areas of Bijnor.

In a similar, if not identical, case on January 17, a court in Bulandshahr district of the state granted bail to 13 people accused of perpetrating violence on December 20. According to a news report, in the bail order of one of the accused, the court observed, “The accused is not named in the FIR. The FIR was filed 15 hours later and he has been falsely implicated. The house of the accused is 8 km away from the spot (where the violence took place). No rioting, loot or attempt to murder was carried out by him. It is observed that he was not present at the spot and that police has no CCTV footage of the same.”

Moreover, on January 17, a district court in Muzaffarnagar granted bail to 14 people who were arrested in connection with violence during the protests on December 20. Reports said district judge Sanjay Kumar Pachori allowed their bail plea and directed that they be released after furnishing two sureties each of Rs 1 lakh. After a case was registered against ten students of a local madrassa, they were arrested. However, the students were also granted bail later by a court after the SIT probing the incidents found that there was no evidence against them.

Notably, this trend of police filing FIRs against innocent people, especially Muslims, was also observed by the People’s Tribunal on State Action in UP. According to the preliminary findings of the tribunal, “The Jury found and concluded that the UP police has been guilty of inflicting enormous violence targeting the Muslim community, peaceful protestors, and not even sparing those were not involved in the protest.”

“The police brutality included, apart from violence inflicted on protestors, the arrest of and filing of false cases against innocent people,” they added. The jury said, “The complaints of the victims about police brutality, violence and destruction of property were either not filed or filed incorrectly. On the other hand, thousands of FIRs were filed against unnamed persons on accusation that protestors had become violent with the intention of continued harassment and intimidation.”

SC issues notice to UP government

Meanwhile on Friday, the Supreme Court issued notice to the Yogi Adityanath government, asking for its response to a petition against the state administration’s move to confiscate property of those who were allegedly involved in damaging public property during the anti-CAA and NRC agitations in December last year. The apex court issued the notice in a petition filed by advocate Parwaiz Arif Titu. The petitioner has alleged that the people whose properties have been ordered to be seized were only from one particular community.

According to Hindustan Times, the petition said the UP government had chosen to go by what it described as a “flawed” verdict of the Allahabad high court though the top court had clearly laid down the procedure that had to be followed. The petitioner had also presented some notices that had been issued. It is clear that people who had been sent notices had not even been booked in criminal cases, the petition says. “There is no detail of any crimes committed by them,” it adds.

As The Wire has reported, experts say there is no legal backing for the UP government’s action to seize property of the alleged rioters. Several members of the legal fraternity have questioned this action and its basis and most lawyers The Wire spoke to insisted that the action was not in accordance with the law. Senior lawyer C.U. Singh had termed the action blatantly illegal. “This is grossly unconstitutional and illegal because it is not supported by any law and it results in pre-judging people without even the benefit of a fair trial,” said Singh. Questioning the action he further said, when “they have not even investigated anything, the UP government was acting like the ‘judge, jury and hangman’.”

It can be recalled that, following the violence in the state in December last year, several UP district administrations served recovery notices to people, asking them to pay up over Rs 50 lakh to avoid attachment of their properties for their alleged role in damaging public property. And this included the cases in which the district administration was yet to make a final estimate of the damage to property during anti-CAA protests. In Firozabad, the administration served show-cause notices to 26 people without making any final estimates of the damage of the public property. The families of some of those who were served notices told the Indian Express that they are daily wage labourers who were working when the violence was reported. Most recipients of the notices were in jail.