In the trade-off between health and economic well-being, the latter figures more prominently among the urban poor. 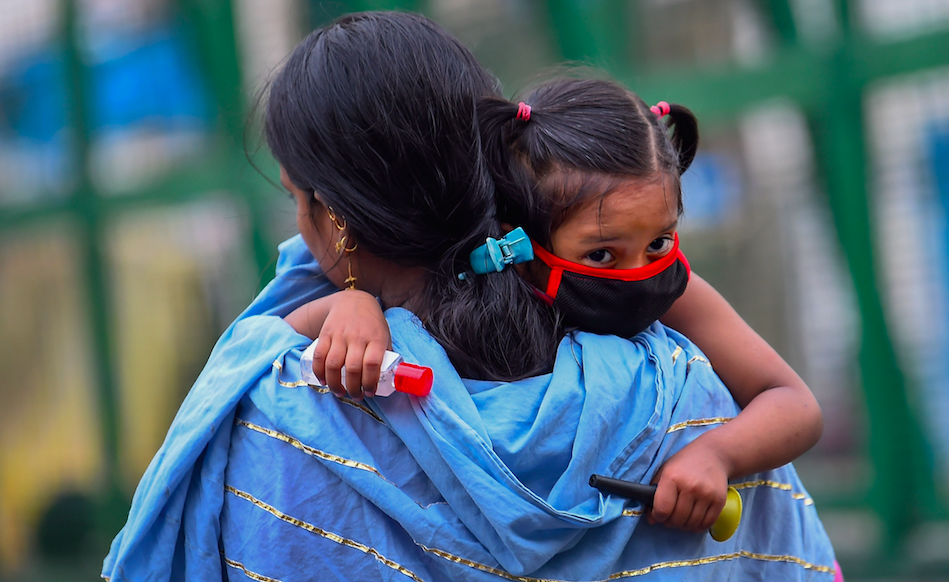 Representative image of a mother and her child during the lockdown in Delhi. Photo: PTI

While several commentators have highlighted the plight of migrants due to the ongoing COVID-19 crisis, less is known about how low-income families living in urban shanty towns are faring.

The authors began a phone survey on April 3 – after the lockdown was announced on March 24 – among a random sample of households in the industrial areas of Delhi, to assess the impact on their livelihoods, and physical and emotional well-being.

The dates of survey of our respondents (who are a random sample of about 1,500 households across five districts of Delhi) were randomly selected. Hence, respondents who were interviewed earlier (Phase 1) are mostly similar in socioeconomic characteristics to those who we interviewed later, after April 19, in Phase 2.

This allows us to compare the experiences of the sample in Phase 1 and Phase 2 and attribute any differences in their responses to the length of time that they have been exposed to the lockdown.

What has been the impact on earnings and incomes over a month (April 3-May 3) of exposure to the lockdown? Have the policy responses through food and cash transfers to low-income households in these urban clusters improved relative to the early phase of shutdown?

Are women and men more stressed following the extension of lockdown, relative to the initial days? Is the health communication strategy of the government effective in sustaining social distancing and hygiene practices?

Survey data from up until April 19 capture responses of 456 households, and between April 20 and May 3 of 931 households. Our combined sample consists of women and men in 1,387 households during the entire period.

Have unemployment and earnings worsened over the course of the lockdown?

Overall, our survey continues to indicate a massive shock to the livelihoods and wage earnings of these families. As expected, the vast majority of the workers in these residential areas (~90% of the men) have been completely unable to work, and this situation has not eased over time, as suggested by the responses in Phase 2, even with the relaxing of some restrictions.

Consistently, around 85% of the respondents have not earned any income from their main occupation. The proportion reporting non-receipt of wages is 12 percentage points higher in Phase 2 than in Phase 1. 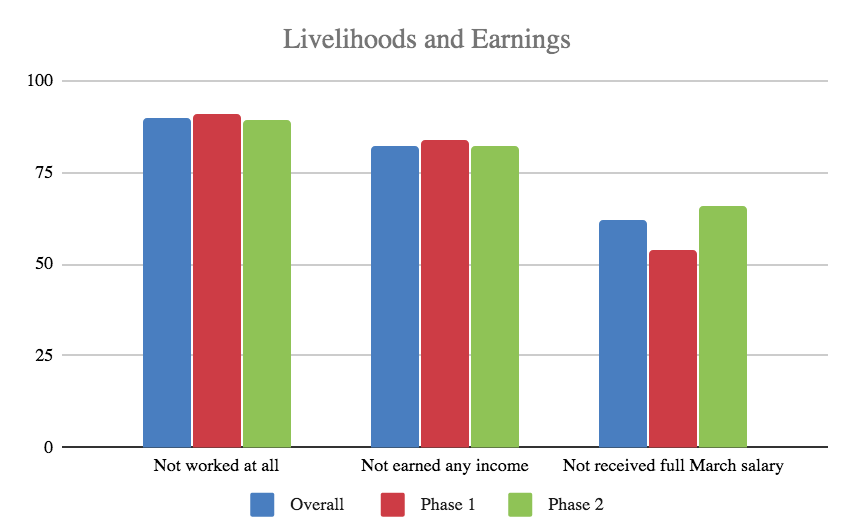 A larger proportion of those reporting unemployment are casual workers (~20%) in Phase 2 compared to Phase 1 (~9%). In terms of loss of livelihoods, wage labourers (for example, those employed in a specific sector such as manufacturing) and casual labourers (daily wagers not attached to one specific sector), thus, are by far the most adversely affected (45%), followed by the self-employed in informal sector (~31%).

Of those who were gainfully employed before March 24 and reported some days of work post lockdown, the daily earnings have declined by 77% for the entire sample across both phases, from an average of Rs 373 to Rs 87 per day. 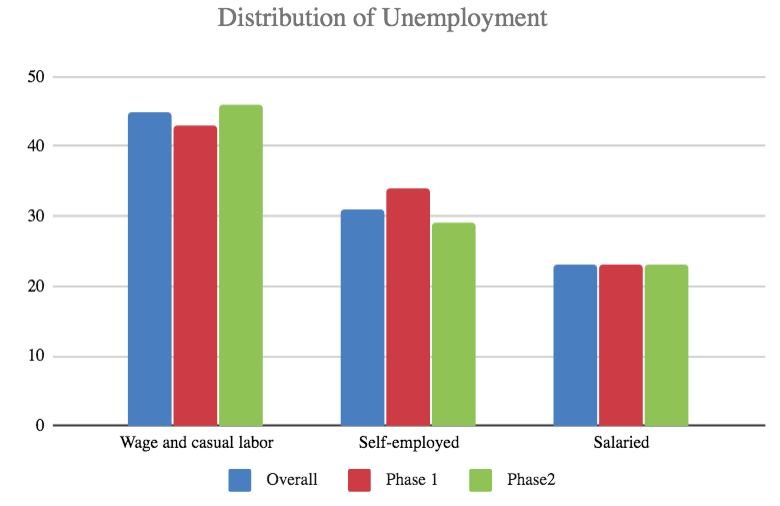 Many of the respondents surveyed rely on friends and family to tide over temporary setbacks. We asked about job losses among their social networks as this would presumably lead to higher levels of stress than otherwise. Seventy seven percent report loss of job in their family, and over 72% within their network of friends and relatives.

More respondents report loss of job within their social network (family, relatives, and friends) in Phase 2 (74%) compared to Phase 1 (66%). A majority of respondents continue to perceive the job losses as temporary but there is an increase in the proportion who perceive the job losses in their social network as permanent – from 14% in Phase 1 to 27% in Phase 2, suggesting that as the duration of the lockdown increased, more workers see unemployment as a permanent job loss.

Financial concerns continue to be the number one source of stress for both men and women across the period and between Phases.

We decipher an increase in health concerns, depression and anxiety, as well as sleep disorders in Phase 2 relative to Phase 1 for both men and women. Women continue to exhibit higher levels of stress, overall, than men. 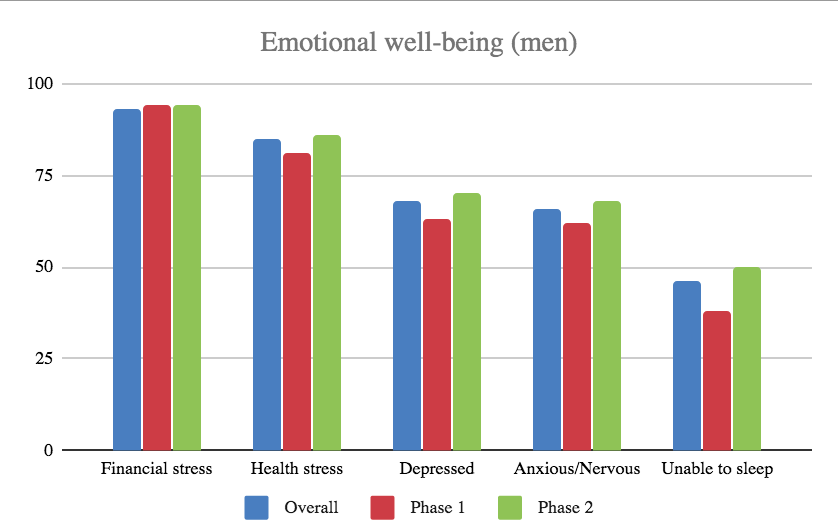 These numbers indicate that as the shutdown in social and economic activity stretches out, mental distress is likely to increase. This is a deeply neglected aspect of the ongoing pandemic that ought to be addressed since it can have repercussions on productivity of workers, and may worsen if economic distress continues or gets exacerbated.

Has outreach of public support improved?

Fifty six percent of the respondents report receiving some kind of assistance or help during the lockdown, an increase from about 47% in Phase 1.

Figure 4. Government and other assistance Are social distancing and personal hygiene practices here to stay?

The overwhelming – and  worrying – answer is ‘no’. Community health practices, in terms of avoiding social interactions and maintaining personal hygiene, have not gone up and may have gone down. This is particularly true for social gatherings, which seem more likely to occur in Phase 2.

It is natural, given the exigencies of the high population density in these residential locations, that maintaining physical distance over long periods of time can be difficult and are likely to wane as we progress further into the lockdown.

With an expected increase in infection rates as the lockdown eases and social and economic activities resume, there is an urgent need to continue educating and sensitising this population on health and distancing practices. 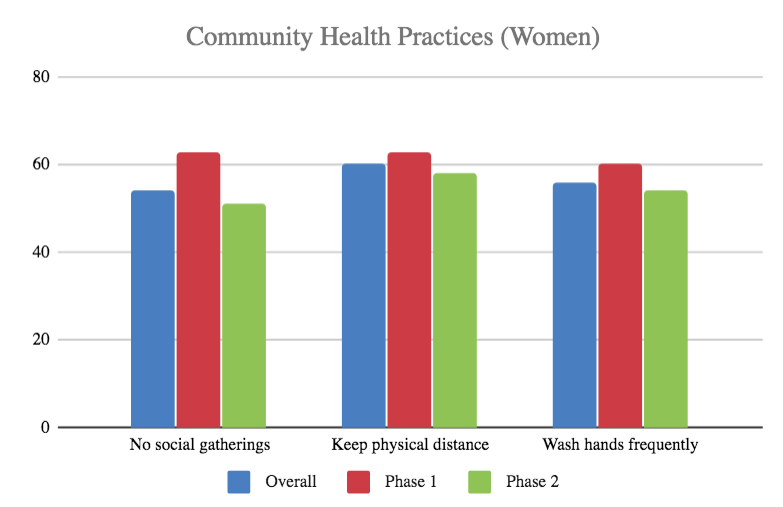 On the positive side, only about 14% of the sample report having fallen sick after the lockdown mainly with a combination of symptoms: fever, fever and cough, cough. About 3% knew of COVID-19 positive cases in their locality.

While the reported physical impact (in terms of poor health) of COVID-19 among our sample appears to be low and risen marginally from 10% to 14% over time, the psychological impact remains very high and has worsened (by 10-11 percentage points for some measures) with the prolonging of the shutdown and despite easing of some restrictions.

Our findings suggest low rates of health shocks but high levels of financial hardship, anxiety and psychological distress, which are likely to persist even as restrictions on social and economic activities ease.

In the trade-off between health and economic well-being, our survey suggests that the latter figures more prominently among the urban poor.

Alleviation of the financial hardships faced by these households through substantive public transfers today are necessary to prevent continued economic and psychological distress in the longer term.