Ground Report: Hawkers Arrested in Gorakhpur Are Still Wondering What They Did Wrong

Rashid Ali and Mohd Yasin were in custody for 12 days and allegedly beaten by the police, though they say they had nothing to do with the anti-Citizenship (Amendment) Act protests. 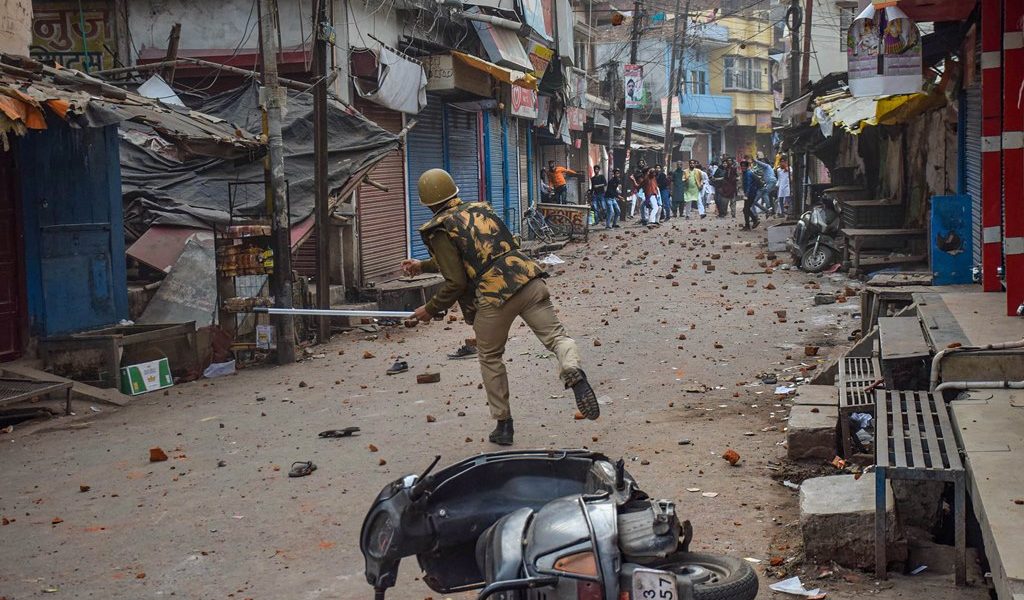 Police and protestors throw stones at each other during a demonstration against the Citizenship Amendment Act (CAA), in Gorakhpur, Friday, Dec. 20, 2019. Photo: PTI

Gorakhpur: Two young street hawkers in Uttar Pradesh’s Gorakhpur were languishing in jail for 12 days before they were released on December 31. The police arrested Rashid Ali and Mohd Yasin, who sell clothes on the street, on December 20 after protests against the Citizenship (Amendment) Act (CAA) and National Register of Citizens (NRC) erupted across the state.

During the protest, clashes between the police and protesters took place near two locations – Nakhas Chauraha and Madina Masjid. Amidst stone-pelting and lathicharge, the windows of a vehicle belonging to a police officer were smashed. In all, say the authorities, three inspectors and 12 constables suffered injuries in the stone-pelting.

An FIR filed by kotwali in-charge Jaideep Verma  states, “Despite the enforcement of Section 144, a crowd gathered breaking the law. Five hundred people held the place with bricks, stones and sticks. They did not budge despite warning. Government employees were attacked. Roads were covered with bricks and stones as a result of stone-pelting. There was a stampede owing to fear among the general public who fled leaving behind shoes and slippers. The windows of ASP PTS Rajesh Bharti’s vehicle were broken. They seized the police loudspeaker and a bag containing tear gas shells. They resorted to stones and sticks.”

The FIR also states, “In order to control the crowd, a light force/lathicharge was used. Ten shells of tear gas were fired.”

So far, five people have been arrested in the matter including Mohd Shadab (36), Hamza (21) and Ayub Khan (36). The police have released photos of the alleged miscreants in the media and pasted them at various places.

The damage done to public property during the ruckus has been assessed to be nearly Rs 2 lakh. This includes damage to the police officer’s vehicle,half a dozen CCTV cameras and the disappearance of a bike. The district administration plans to issue a notice to recover the damages. 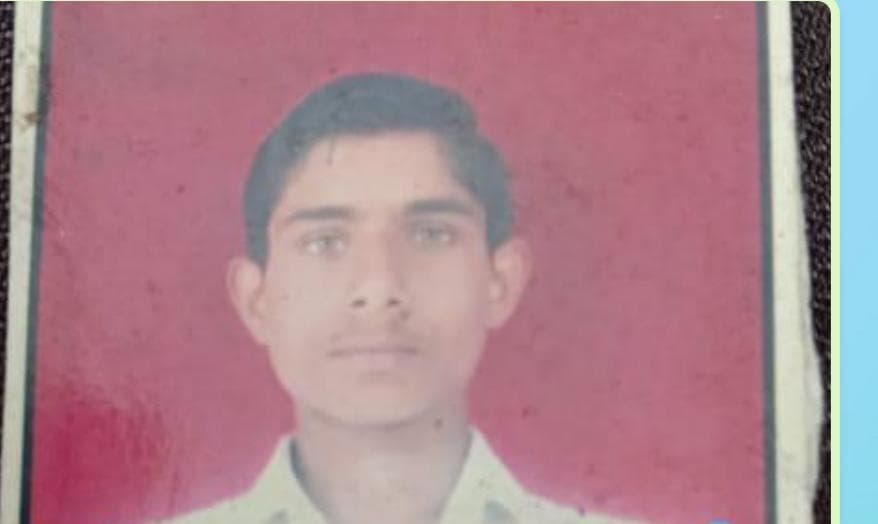 Rashid and Yasin hail from Chiragali village and Dhanuapur village of Sitapur district respectively. For many years now, the two have been earning a livelihood as street hawkers selling bolts of cloth in Gorakhpur. They lived in a rented house near Nakhas.

Salman, a relative of Rashid’s, said that he received information about the December 20 arrest several days later. Their family members were worried as they were unable to contact the two on the phone. Rashid’s landlord then informed them about the arrests.

Salman said that he had visited the two men in jail. Rashid and Yasin told him that they were in their room when the ruckus erupted. Once the situation became normal, they went to a nearby store to purchase rations.

When they reached the shop, they saw policemen coming towards them. The shopkeeper got scared and pulled the shutter of his shop down. The two of them were also trapped inside.

The police entered the shop and allegedly beat up Rashid and Yasin as well as the shopkeeper. They took Rashid and Yasin to the kotwali and kept them in a lockup the whole night. The next day, they were handed challans under Section 107, 116, and 151.

Salman said that both Rashid and Yasin belong to poor families. They came to Gorakhpur in search of  livelihood as they do not have any ancestral land or property. They were neither part of the agitation nor created any fracas, yet the police arrested them. They have now been granted bail and released.

“We are still unable to understand what was our fault, which was badly beaten and kept in jail for 12 days,” Rashid told The Wire.

Most of those arrested alongside Rashid and Yasin have the same complaint – that they have been arrested without reason and tortured in jail.

The same day, Rashid and Yasin were also granted bail, but their release was delayed in the name of verification. It is claimed that information about them is being sought from the Sitapur police, after which they will be released.

“On the morning of December 20, Yasin and I went out to sell clothes in the countryside. We returned from there at 5:30 pm. We had no idea what happened in Gorakhpur. When I returned, I saw a lot of policemen roaming around. Shortly after coming to the lodge, I went to get rations with Yasin. Then 20-25 policemen came together and caught both of us and started beating them with sticks,” he said

Everything they were carrying on them was taken away, Rashid said. “I had Rs 8,400 and Yasin had Rs 12,000. Along with an ID and ATM card, Yasin also had mobile. Everything has been deposited.”

Afgan is one of the people who was granted bail on December 27. His brother, Parvez, is a journalist. Parvez said that his sister’s wedding was scheduled to be held on December 28. Afgan was arrested on December 20 when he had gone out to distribute invitation cards. Family members allege that even though they provided evidence of his innocence to the police, he was sent to jail.

On the same day, the young Imam of a mosque situated in Beniganj Noorul Haq (28) and his colleague Irshad were also granted bail. Both of them were arrested on December 20 at around 4:30 pm. Haq’s father, Abdul Haq, said that after offering prayers at the mosque, Noorul Haq had gone to Nakhas on his bike along with Irshad to buy some necessities. He said that the two had no idea of the situation at Nakhas. When they reached, the clash between the police and protesters had already happened. The situation was normal but all shops were closed and there was heavy police deployment.

Upon seeing the tense situation, they decided to return but a policeman noticed them and stuck a lathi in the wheel to stop them. When they fell from the bike, they were beaten with lathis and arrested. In jail, they were beaten again.

According to Abdul, they were sent to  the Khorabar police station later. They were thrashed again in the police vehicle while they were being shifted. For two days, they were dragged from one police station to another in Kotwali, Khorabar and Cantt.

Abdul says that a member of the Shanti Sadbhavna Samiti told the police that Noorul Haq and Irshad had no involvement in the incident, yet they were not released.

Last Saturday, Noorul Haq and Irshad were finally released after about nine days. Abdul alleges that his son and Irshad have been beaten up mercilessly.

People released from jail are still in fear. Most of them are refraining from speaking to the media as they are afraid of falling into the clutches of the police again.

On December 27, the police did not allow Friday afternoon prayers to be offered in the mosque located in the Police Line. The policemen stopped men going to the mosque to offer prayers, along with the Imam of the mosque Hafiz Azeem Yaralwi, at the gate of Police Line saying that everything was closed for the day.

The mosque and Idgah located in the Police Line are quite old. It was the first time Friday prayers could not be offered in this historic mosque. So far, no police officer has given any clarification regarding why people were stopped from offering prayers.

The Imam who leads Friday prayers in the mosque, Hafiz Azeem Yaralwi, said, “Friday prayer is held at 1:15 pm at this mosque. Around 300 people gather here to offer the prayer on Fridays. This Friday, though, the police stopped me and other men at the Police Line gate and told us that everything was closed. No prayer will be offered.” 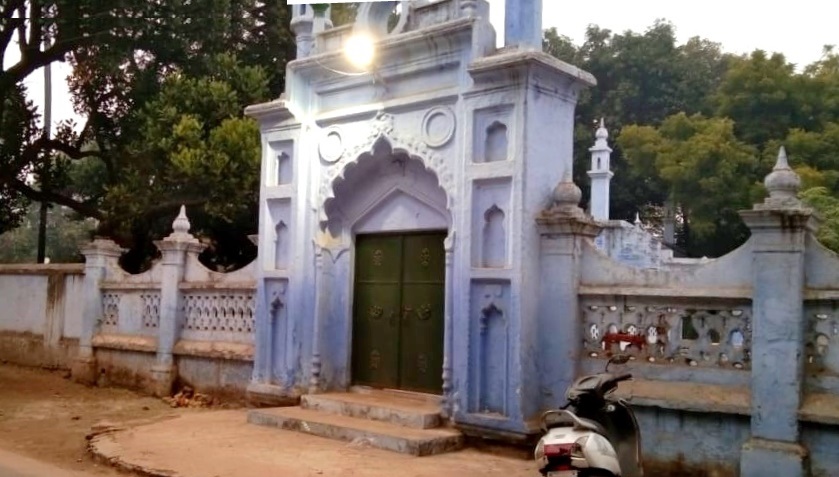 According to Azeem, around 50 men were with him when they were stopped.

At least 19 people have been killed so far in various incidents of violence during protests against the CAA in Uttar Pradesh. According to the information given by the police on December 26, 288 policemen were injured, out of which 61 suffered bullet injuries.

Earlier, chief minister Yogi Adityanath had warned that those who damage public property will not be spared.

Manoj Singh is editor of the website Gorakhpur Newline.

Translated from Hindi by Naushin Rehman. You can read the Hindi original here and here.