The three students, based in Agra, have been sent to 14-day judicial custody. 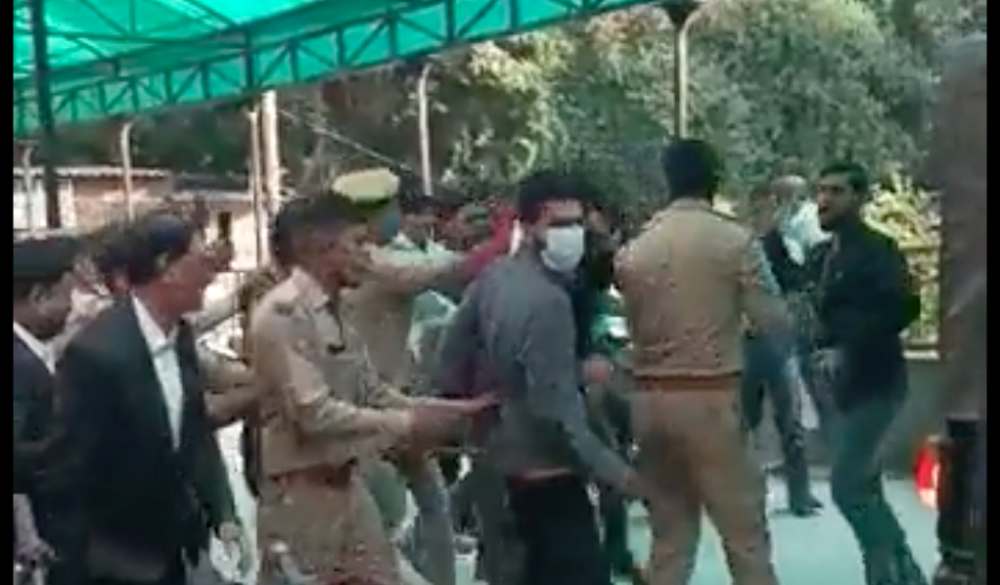 The students being escorted by the police while a group of right-wing activists and lawyers heckle and abuse them. Photo: Screengrab from video

The three students, two of them aged 20 and one 21, were also remanded in 14-day judicial custody by an Agra court, the officials said.

While coming out of the court, they were allegedly heckled and chased by some people.

Meanwhile, a body of Jammu and Kashmir students urged Uttar Pradesh chief minister Yogi Adityanath to withdraw the sedition charge against them. Adityanath earlier in the day had said the sedition law will be invoked against those celebrating Pakistan’s victory against India in the recent T20 World Cup match.

“The three students were arrested on Wednesday after an FIR was lodged against them at the Jagdishpura police station. They were accused of raising pro-Pakistan slogans in the wake of an India-Pakistan T20 cricket match and posting celebratory messages on social media after Pakistan’s victory,” a police official told PTI.

On Thursday, they were produced in a magistrate’s court in Agra, which remanded them in 14-day judicial custody.

“The FIR was initially registered under IPC Sections 153A (promoting enmity between groups) and 505 (creating or publishing content to promote enmity). Section 124A (sedition) of the IPC was included on Friday in the case,” the police official said.

When the students were coming out of the court, some Hindu right-wing activists raised slogans against Pakistan and chased them. Some lawyers also heckled the students while they were being taken from the court to a police vehicle, according to purported videos that emerged on social media.

They have urged the chief minister to intervene for the withdrawal of the sedition case and the FIR against the students, he said in a statement. “The college authorities must revoke the suspension of the students, whom we urged to focus on their studies,” he said.

“These incidents may increase the sense of insecurity and anxiety among Kashmiri students studying outside as well as among their parents and relatives in Kashmir. We urge the Centre and state government to ensure adequate security for their safety,” the statement continues.

Also read: Sedition Has No Room in Modern Democracies, Time for The Law to Be Repealed

Mansoor Wani, a research fellow at Agra University and mentor of the accused students, said they were young and needed counselling instead of such heckling. “We apologise on their behalf if they were involved in such an unfortunate incident. But these are young men from financially weak backgrounds. They need guidance. We will counsel them. They should not be booked under such harsh laws. It will ruin their careers,” Wani added.

The three students’ families too have asked the UP government to forgive the students, Indian Express reported.

“We were so happy. Recently, the college gave him an award for his performance in the three years in the course… We got to know through social media that he had been arrested. It has broken all of us,” Ganai’s elder sister Fancy Bano, who is an intern at a Bandipora hospital, told the newspaper.

RBS Engineering Technical College Director (Academics) R.B. Khushwaha told the Indian Express that it was wrong to say “anti-India” slogans had been raised by students. “On Tuesday, some people came and created a ruckus, despite us taking action and the students apologising… On Sunday, after the match, some students had uploaded some status on social media. Subsequently, we sought a reply from the students and took action against them. They had apologised on social media as well saying their intention was not to hurt anyone’s sentiments,” Khushwaha was quoted as saying.

While police across the country are quick to use sedition charges against, the legal validity of using this section is questionable. The Supreme Court has repeatedly ruled that sedition is constituted by written or spoken words which “have the effect of bringing contempt or dissatisfaction or the idea of subverting government by violent means”. In Kedar Nath Singh v State of Bihar, the apex court said that if comments, however strongly worded, do not have the tendency to incite violence, they cannot be treated as sedition.

Earlier this year, the Supreme Court said that it “is time to define the limits of sedition,” noting that sections of the Indian Penal Code that deal with sedition require interpretation, particularly in the context of media freedom.