The chief minister, in a statement released by the state government, directed the divisional commissioner and IG Kanpur to visit the site and give a report on the cause of the accident immediately. 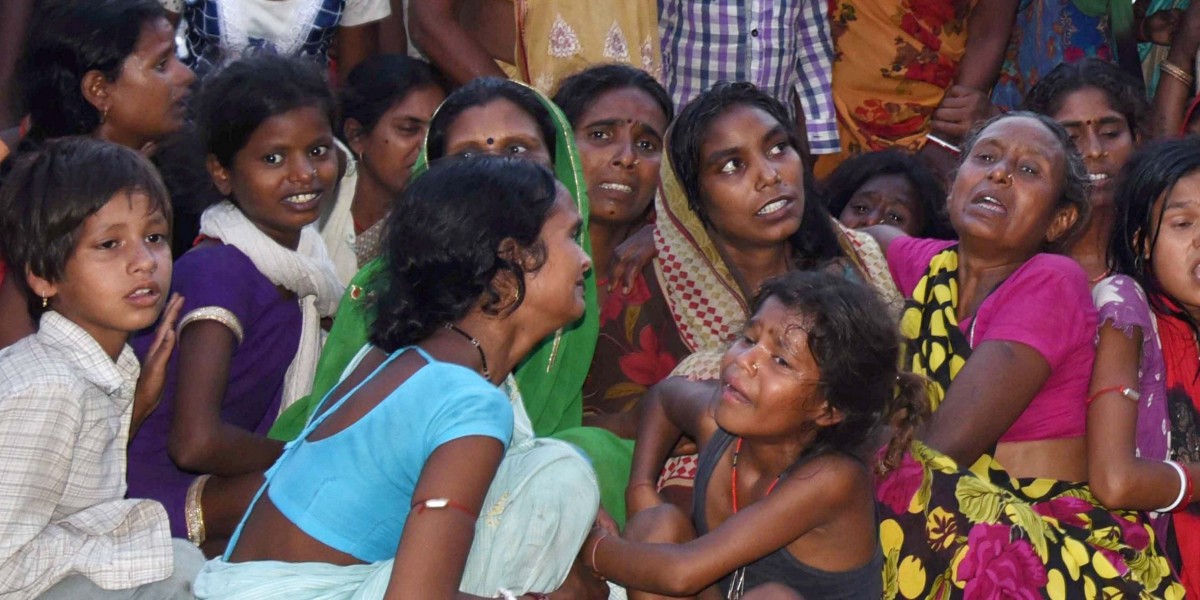 Family members of migrant workers who were killed in accidents on Friday mourn. Photo: PTI

New Delhi: At least 24 migrant labourers lost their lives and 36 people sustained injuries when a trailer truck carrying them collided with another truck in the early hours of Saturday in Uttar Pradesh’s Auraiya district.

Both trucks were carrying labourers. The incident took place between 3 am and 3:30 am, police said.

“The accident took place in Mihauli in which 24 people died, and around 36 were injured. A trailer truck carrying around 50 migrant labourers was coming from Rajasthan and it collided with another truck. The accident took place on Saturday between 3:00 am and 3:30 am,” circle officer, Auraiya, Surendranath Yadav told PTI.

Auraiya, which falls under the Kanpur division, is in south-west Uttar Pradesh. It is on the National Highway-19 and is 400 km away from Delhi and 200 km from Lucknow.

Uttar Pradesh chief minister Yogi Adityanath expressed his deepest condolences to the families of the deceased.

Elaborating on the incident, Yadav said, “The trailer truck hit the other vehicle, which was coming from Delhi and heading towards Chhatarpur in Madhya Pradesh. Both the vehicles turned upside down after losing control.”

The chief minister, in a statement released by the state government, directed the divisional commissioner and IG Kanpur to visit the site and give a report on the cause of the accident immediately.

“UP chief minister has taken note of the unfortunate incident in Auraiya. He has expressed his deepest condolences to the families of the labourers who lost their lives. He has also directed that all the injured be provided medical care and the Divisional Commissioner and IG Kanpur to visit the site and give the report on the cause of the accident immediately,” the statement said.

Talking to PTI over phone, Inspector General, Kanpur, Mohit Agarwal said most of the migrant labourers in both the vehicles were from Jharkhand and West Bengal.

“The accident took place when some of the labourers travelling on the truck (coming from Delhi) halted on the Auraiya-Kanpur Dehat Road to have tea at a local shop. At this point of time, a truck coming from Rajasthan hit the stationary vehicle. The intensity of the hit was so huge that both the vehicles turned upside down and fell into a ditch on the roadside,” he told PTI.

“Of the 36 injured, as many as 14 labourers with serious injuries have been admitted to PGI in Saifai (in Etawah district), while 22 have been hospitalised in Auraiya,” he added.

Additional chief secretary (home) Awanish Awasthi said, “Going by the information received till now, there were a couple of migrant labourers from Uttar Pradesh’s Kushinagar district. Most of the deceased labourers were from West Bengal and Jharkhand.”

When asked whether any financial assistance will be provided to the families of the deceased, he said information in this regard will be given soon.

Also read: Lockdown Diary: This Is the Time to Learn of the Smallness of Humans…

On Friday, six migrant workers had been killed in different accidents across UP as they tried to make their way home.

On Wednesday night, six migrant workers, who were walking to their homes in Bihar from Punjab, were killed and five others seriously injured when a speeding bus ran over them on the Delhi-Saharanpur highway in Uttar Pradesh’s Muzaffarnagar district.

In two separate accidents between Tuesday and Wednesday, four migrant labourers and members of their families – all on their way home in the course of the lockdown – died in Uttar Pradesh.

At least five migrant labourers were killed and 13 others injured when a truck in which they were travelling overturned in Madhya Pradesh’s Narsinghpur district last Saturday.

As many as 16 migrant workers were run over by a goods train while they slept on tracks at Aurangabad in Maharashtra, last week.

The stringent lockdown imposed in India for nearly two months now has led to a number of non-coronavirus deaths. Statistics put together by activists suggest more than 400 people have died because of the lockdown. Of them, 75 people died in rail or road accidents while walking to their homes – the only mode of travel available as public transport had been suspended by Prime Minister Narendra Modi’s government, which gave notice of only four hours before the first lockdown came into effect.