No representatives of the Yogi Adityanath government in Uttar Pradesh has visited the woman in hospital yet. 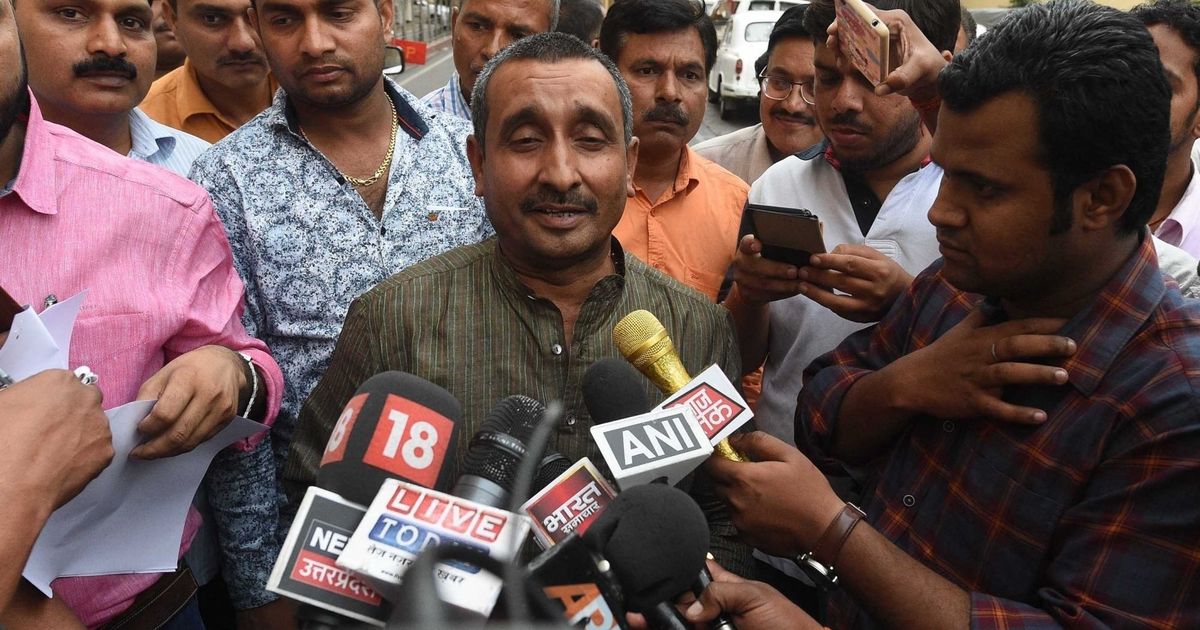 New Delhi: Bharatiya Janata Party MLA Kuldeep Singh Sengar is among the 10 people named in an FIR registered on Monday in connection with the Sunday incident in which the Unnao rape survivor and her lawyer were critically injured and her two aunts killed, police said.

The FIR, in which 15-20 unnamed people were also mentioned, was registered at the Gurubuxganj police station in Raebareli, they said.

“FIR has been registered under the Indian Penal Code’s sections 302 (murder), 307 (attempt to murder), 506 (criminal intimidation), 120b (criminal conspiracy) against 10 named persons, including the BJP MLA, and 15-20 others,” a police officer said.

The mother of the 19-year-old rape survivor, who was 17 when Sengar and his accomplices allegedly gang-raped her, has called Sunday’s incident a “conspiracy to wipe out her family.”

For a while in the aftermath of the accident, which took place at around 1 pm on Sunday, it was being reported that the woman’s mother had been travelling with her in the car and had also died. The other woman turned out to be one of her aunts. The family was travelling to Rae Bareli district jail to meet the woman’s uncle who was convicted in a separate murder case earlier this year. Incidentally, the uncle is the one who lodged the complaint which led to the registration of the case.

The survivor’s mother spoke to reporters of renewed threats that the family was receiving of late. “It was not an accident but a conspiracy to eliminate all of us. The son of a co-accused in the case [reportedly Sengar’s brother Atul Singh], Shahi Singh, and another youth of the village had threatened us. They said that they will deal with us,” her mother said.

Sengar and his brother Atul were arrested and imprisoned last year. However, they remain influential in the region, to the extent that BJP’s newly elected Unnao MP Sachchidanand Hari Sakshi alias Sakshi Maharaj recently met Sengar at the Sitapur district jail to “thank” him after the general election.

Providing credence to the woman’s mother’s claim, police said on Monday that the team that rushed to the spot found that the registration plate of the truck that hit the car had been scrubbed and painted. This, suspect some, implies premeditation.

Police, reported PTI, have managed to retrieve the number: UP 71 AT 8300. The registration plate is from Fatehpur district. The truck has been impounded and the driver arrested, police. said.

Rajeev Krishna, ADG Lucknow Zone on Unnao rape victim’s accident: We are investigating if numbers of driver, cleaner & owner (of the truck) match with known numbers of Kuldeep Singh Sengar (accused in Unnao rape case) and his associates. pic.twitter.com/nlefFrU4uv

One armed personnel and two women constables had been assigned round-the-clock duty for the safety of the survivor and her family, but they were not present at the time of the accident, Unnao superintendent of police M.P. Verma said.

“An inquiry has been ordered to look into the reasons as to why the security personnel were not present with her and action will be taken after getting a report,” Verma said.

Additional teams from Lucknow have reached Rae Bareli for investigation.

Meanwhile, in spite of no representatives of the Uttar Pradesh government visiting the woman, director general of police O.P. Singh was quoted by PTI as having said that the government “is ready for a CBI probe into the accident if the survivor’s mother or any other relative makes any request in this regard”.

Singh told the news agency that an “unbiased probe” was on.

Lucknow district magistrate Kaushalraj Sharma said the Uttar Pradesh government has decided to bear all the expenses of the treatment of the woman and her lawyer.

Rajya Sabha proceedings were briefly adjourned following uproar by Opposition parties over the issue and the demand for proper investigation into the accident.

Raising the matter during the Zero Hour in the house, Samajwadi Party member Ram Gopal Yadav alleged that an attempt had been made to “kill” her. Soon after, the entire opposition including MPs from Aam Aadmi Party, Samajwadi Party, Bahujan Samaj Party and Congress were on their feet.

Chairman M. Venkaiah Naidu said he has asked Union home minister Amit Shah to take note of the matter, but protesting members did not yield, following which the house was adjourned for a while.

Meanwhile, the Delhi Commission for Women chairperson Swati Maliwal visited the woman at the trauma centre of Lucknow’s King George’s Medical University said she should be airlifted to Delhi for better treatment as she is “critical”.

My letter to @myogiadityanath on Unnao case. Request him to urgently air lift both victims, DCW will ensure free of cost treatment in best Pvt Hospital in Delhi. Also file FIR & remove Kuldeep Sengar from post of MLA and BJP membership!

Urgently they need to be sent to Delhi! pic.twitter.com/b2kzEWdSt0

“We will fight for the girl to get justice. The family has alleged that the accident was a conspiracy,” the chairperson said.

Uttar Pradesh Congress leader Aradhana Mishra visited the trauma centre on Sunday night, reportedly on the directions of Congress general secretary Priyanka Gandhi Vadra. She too reported that the woman was critical. Among political leaders who have noted that the mystery surrounding the attack needed to be resolved were Priyanka, her brother Rahul, Samajwadi Party chief Akhilesh Yadav and Aam Aadmi Party convener and Delhi chief minister Arvind Kejriwal.

A new special education bulletin for Indian women. Don’t ask questions if a BJP MLA is accused of having raped you.https://t.co/8ObmmFBl0L

Systematic attempts to eliminate the Unnao rape victim and her family appear to be a pre-planned conspiracy & a mockery of rule of law.
How can any civilised society allow such state sponsored barbarism ?

Maliwal also made note that no one from the Yogi Adityanath government in Uttar Pradesh has visited the woman till now.