BJP MLA Kuldeep Singh Sengar has been imprisoned since last year, but his influence and inordinate clout in Unnao remains – a fact reflected in the events that unfolded since June 2017.

The sequence of events in the aftermath of the alleged Unnao rape represent the particular breakdown of law and order in the region. Photo: Twitter, PTI

New Delhi: News of a truck ramming into the vehicle in which 19-year-old Unnao rape survivor, her two aunts and lawyer were travelling has dominated headlines ever since it broke late on Sunday. The woman and her lawyer are both critical, while her two aunts died in the collision.

The woman’s family and leaders of the opposition have openly alleged that the main rape accused, Bharatiya Janata Party MLA Kuldeep Singh Sengar engineered the “accident.” Meanwhile, cases have been registered against Sengar and 29 others.

Sengar has been the custody of the Central Bureau of Investigation (CBI) since last year, but his influence and inordinate clout in Uttar Pradesh’s Unnao remains.

The BJP leader’s notorious reach is also what made the case one of particular and prolonged suffering for the survivor.

Here’s how the case unfolded:

June 17, 2017: Kuldeep Singh Sengar, his brother Atul Singh and their accomplices allegedly gangrape the girl – then a minor aged 17 – on the promise that they will help her get a job. This is two months after the BJP government of Adityanath came to power in Uttar Pradesh.

Also read: Unnao and Banda: A Tale of Two Rapes in Uttar Pradesh

June 20, 2017: The girl is found in Aurraiya and brought back to Unnao. The Hindu reports Unnao police as having said that a case was registered at the Mankhi police station under Sections 363 (kidnapping) and 366 (kidnapping a woman to compel her for marriage) of the Indian Penal Code. This was allegedly based on the survivor’s complaint.

However, The Wire had reported on how the case registered by the Unnao police did not name MLA Sengar as an accused. It was said that the survivor and her family were thrown out of the Mankhi police station when they insisted that they be allowed to name him in the FIR. 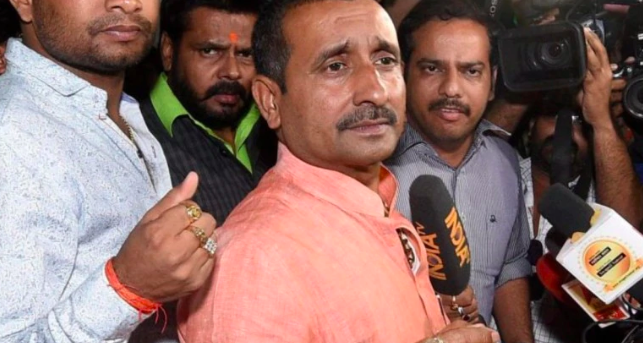 July 3, 2017: Realising that the local police administration was under the full control of the Sengar family, the survivor wrote repeatedly to the chief minister’s office and senior police officers in the state demanding that rape charges be framed against Sengar. Almost a year passes, but no action is taken.

February 24, 2018: After months of running around – and failing – to get rape charges framed against Sengar, the survivor’s mother eventually approaches the chief judicial magistrate to finally get an FIR lodged against the BJP MLA.

Despite this, the Unnao police take no action in the case. By now, the survivor’s family has allegedly been getting repeated threats from Sengar and his coterie.

April 3, 2018: The family travels to Unnao for the hearing. The survivor’s father, Surendra, is brutally assaulted by Sengar’s brother, Atul Singh, and accomplices, in broad daylight. Videos later emerge showing the severity of the beating that was meted out to the survivor’s father. According to reports then, Atul and his men tied Surendra to a tree, and proceeded to punch, thrash and beat him with sticks, belts and rods in front of his family until he lost consciousness.

Police file an FIR charging five men with assault, but conveniently exclude Atul despite the fact that the written complaint submitted by the family to the police mentions him by name. In a video from the day, Surendra can be heard naming the MLA’s brother as the one who assaulted him.

April 4, 2018: In a bizarre twist of justice, police arrest Surendra on charges of illegal possession of firearms. He is sent to jail amidst his family’s fears that he might be killed in custody. Doctors do not admit him to a hospital despite severe injuries.

Police bring to light the fact that there was alleged “dispute between the two parties over the past 10 to 12 years, with cases registered against each other,” The Hindu had reported.

April 8, 2018: Exasperated, the survivor and her family attempt to commit suicide by self-immolation outside Adityanath’s residence in Lucknow. “I was raped. I have been going from pillar to post for one year but no one has listened to me. I want all of them arrested, otherwise I will kill myself. I had even gone to the chief minister, but to no avail. When we lodged the FIR, we were threatened,” the girl told ANI.

With this, the case first comes into the national limelight.

Sengar calls this a “pre-planned incident” and lauds police for “saving innocent people from being implicated”.

Lucknow: A woman & her family allegedly attempted suicide outside CM Residence. Her family alleges the woman was raped by a BJP MLA & his accomplices & no action is being taken. pic.twitter.com/Srl5yQqhXP

April 9, 2018: The survivor’s father dies in police custody because of “blood poisoning due to perforation of colon” according to the post-mortem report which also lists multiple injuries and abrasions around his arms, thighs, buttocks, knees and abdomen. Police personnel deny accusations of torture.

Widespread outrage follows but Sengar himself walks scot-free and was even spotted entering Adityanath’s house.

April 10, 2018: Atul Singh is arrested along with four others for allegedly thrashing the girl’s father.

April 11, 2018: At last, the Adityanath government orders a special investigation team to be formed to probe the alleged rape case and Surendra’s custodial death.

However, in the pretext of offering her protection, the survivor and her family are confined to a hotel room in Unnao, allegedly without water and electricity.

April 12, 2018: Three days after the father succumbed to his injuries and four days after the survivor tried to commit suicide outside the chief minister’s house, a case is registered against the MLA for kidnapping and rape under the Indian Penal Code and the Protection of Children from Sexual Offences Act.

The Uttar Pradesh government transfers the investigation to the CBI.

Allahabad high court asks the police why Sengar has not bee arrested yet.

“Why should we arrest him? We have mentioned his name in the FIR. Now, CBI can take over the investigation,” the state’s police chief, O.P. Singh, tells reporters.

April 13, 2018: Early in the morning, a CBI team picks Sengar up from his house in Lucknow’s Indira Nagar and keep him “for questioning”. Special CBI teams are rushed to Unnao to carry out preliminary inquiries.

CBI registers a case against him and arrests him late in the day.

April 15, 2018: CBI makes a second arrest in the rape case and takes into custody Shashi Singh, the woman who allegedly took the survivor to Sengar and stood guard outside the door as he raped her.

April 23, 2018: Residents of Unnao carry out a rally in support of Sengar. Holding placards saying ‘Humare vidhayak nirdosh hai (Our legislator is innocent)’, protesters at the rally claim that the entire incident is part of a political conspiracy.

May 11, 2018: After some national dailies suggest that the CBI probe has confirmed the survivor’s charge of rape by Sengar, CBI issues an official press release denying reports.

Also read: BJP May Have Expelled Sunita Gaur, But it Has Always Rewarded Communal Violence

July 11, 2018: CBI charges Sengar and his associate Shashi Singh in the rape case.

July 13, 2018: CBI files a chargesheet against Sengar and nine others for allegedly hatching a conspiracy and implicating the survivor’s father in the arms case. Three policemen, including Ashok Singh Bhaduria, then station officer of Makhi police station, are among those named in the chargesheet, reports News18.

July 31, 2018: A crucial bill seeking to provide death penalty to those convicted of raping girls below the age of 12 years and making the law against such sexual offences more stringent is passed by the Lok Sabha.

Also read: From Kathua and Unnao to Chintagufa, the Law Won’t Act Against Powerful Men

August 18, 2018: A key witness in the murder of the survivor’s father, Yunus, dies under suspicious circumstances and is buried in the same evening. The survivor’s family write to Uttar Pradesh police and CBI, alleging foul play and also seeking protection.

December 27, 2018: An FIR is registered against the Unnao rape survivor, her mother and uncle on charges of submitting alleged forged documents to police as proof that she was a minor during the time of the rape. The complaint was filed by one Haripal Singh, the husband of Shashi Singh, who has been charge-sheeted in the case.

What is the BJP waiting for? Why has this man not been expelled from their party even when his name is in the latest FIR in the Unnao Rape Case?#BJPSackSengar pic.twitter.com/cTpQ0HbFNT

July 4, 2019: The survivor’s uncle – the very same whom she was going to visit on Sunday – is sentenced to ten years in jail for a two-decade-old attempt to murder case filed by Atul Singh.

July 28, 2019: The survivor’s car is hit by an empty truck with its registration place scrubbed out on the way to Rae Bareli. The woman’s two aunts succumb to their injuries. She and her lawyer, Mahendra Singh, remain critical.

July 29, 2019: The survivor’s mother calls the incident a “conspiracy”. Rajya Sabha adjourns over a united opposition bringing up the issue. Sengar is named along with nine others in an FIR. Twenty unnamed people are also included. The Uttar Pradesh government says it’s is ready to hand over the investigation into the accident to the CBI.

July 30, 2019: Nearly two days since the truck collision and after visits from the Delhi women’s commission chief and several politicians, a representative of the Adityanath government, deputy chief minister Dinesh Sharma visits the survivor in the Lucknow hospital where she is undergoing treatment. Sharma says the government is “with the family of the victim”. Earlier in the day, the government sends a formal request to the Centre to transfer the investigation to the CBI.

Uttar Pradesh BJP says Sengar “was suspended from the party long ago,” amid growing demands to sack the lawmaker.