A Delhi court had last year dismissed pleas by the Delhi police for producing Khalid in handcuffs. This year, a Chief Metropolitan Magistrate categorically ordered that he shouldn't be handcuffed. 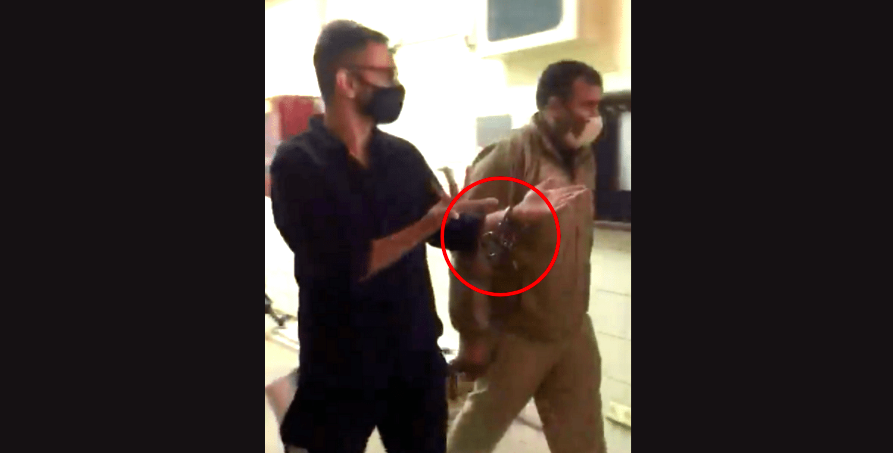 Screengrab from a video showing handcuffs on Umar Khalid as he is produced in court on February 17.

New Delhi: Former Jawaharlal Nehru University student leader Umar Khalid was on Thursday, February 17, produced before a Karkadhooma court in handcuffs, despite a recent court order saying that he should be produced without “using handcuffs or fetters.”

Moreover, a Delhi court had, last year, dismissed pleas by the Delhi police for producing Khalid and another accused activist, Khalid Saifi, in handcuffs and asked for an explanation from the concerned Deputy Commissioners of Police (DCPs) for moving such an application.

Khalid was being presented before the court in the case relating to the Delhi riots FIR No. 59 from 2020.

Reacting to the move, Khalid’s counsels issued a statement saying that he was produced in handcuffs in the courtroom of Judge Amitabh Rawat. Since Judge Rawat was on leave, the reader of the court noted the presence of counsels and accused persons and that there was no production before the Link Judge (Naveen Gupta) or any other judicial officer.

The advocates questioned the move, saying Additional Sessions Judge (ASJ) Vinod Yadav had categorically refused the Delhi police’s application put before him to produce Khalid and Saifi in handcuffs on May 6 last year.

Later in the day, on an application moved by Khalid seeking a departmental probe into his illegal production in handcuffs, the court of ASJ Amitabh Rawat issued a notice to Director General of Police, Prisons to explain why the “extreme steps” were taken.

In his order, ASJ Rawat said: “It needs no reiteration that an under-trial remains in the custody of the court throughout the proceedings and any step of fetters/handcuff, which are extreme steps, can only be taken after a Court allows the same on a request or an application containing reasons. This court has passed no such orders for this accused or, for that matter, any accused in this case.”

The court also directed DG (Prisons) to apprise it “whether any such orders have been passed from their end”. It also directed the Commissioner of Delhi Police to look into the matter saying, “in view of the above stated circumstances and the seriousness of the issue, this Court deems it fit to bring the said lapses, if any, to the notice of the worthy Commissioner of Police, Delhi who may file a report after inquiry through any responsible senior officer whether the accused Umar Khalid was brought in the handcuff today and, if so, on what grounds/orders.”

Sub-Inspector Ranbir Singh and Assistant Sub-Inspector Krishan Kumar, when asked about their decision to produce Khalid in handcuffs, responded by saying that they had done so due to an order by Chief Metropolitan Magistrate of the Patiala House Courts Pankaj Sharma dated April 7, 2021, in FIR 110/2016. The officers further said that they were in possession of the order and had attached it to the warrant.

Questioning the existence of any such order from CMM Sharma, the counsels for Khalid said that after learning of news reports that he was to be produced in handcuffs in FIR 110/2016 by virtue of the April 7, 2021 order, they had moved the concerned court seeking a copy of the order. While doing so, they had also attached a copy of the news item which stated that such an order existed. The lawyers had also submitted the daily order of that very day in FIR 110/2016, which showed that no such direction was issued.

In this matter, the CMM – who is hearing the JNU sedition case from 2016 – had issued notice to the lock-up in-charge and the jail superintendent of Tihar Central Jail.

He had, subsequently on January 17, 2022, passed a categorical order that Khalid should not be handcuffed or fettered.

In this order, CMM Sharma had said that in view of the prevailing COVID-19 circumstances, Khalid should be produced through video conferencing. He had added that upon the lifting of the restrictions related to the pandemic, Khalid should be presented in court “in routine manner, without using handcuffs or fetters”.

Earlier, Khalid’s lawyer, Trideep Pais, was quoted by a news portal as saying, “I had earlier learned that an order had been passed directing that Umar Khalid be produced in handcuffs and fetters and had immediately sought to know the details of the direction, and what triggered it.” The advocate had added that the court clarified that no such order could be located and that Khalid should be produced without any handcuffs or fetters.

In its January 17 order, the court of the CMM had also directed that a copy of the order be sent to the jail superintendent for compliance.

Earlier plea to produce Khalid, others in handcuffs had been struck down

Prior to this, another Delhi court had issued specific directions that Khalid should not be produced in handcuffs.

When in April, 2021, the Delhi Police had moved a plea to bring Khalid and Saifi in handcuffs, saying they were “high-risk prisoners”, the Karkardooma court of ASJ Yadav had dismissed the plea, saying the police’s claim was devoid of merits.

The court had noted that both the accused had already been granted bail in the case pending before it and that the other matter was pending before some other judge. “It is presumed that the bail order(s) of applicants are in the knowledge of senior police officer(s) of Delhi Police… The instant applications are completely bereft of reason(s) prompting the senior police officer(s) to take a decision to move such application(s),” ASJ Yadav had said.

Taking strong exception to the applications, the court had also directed, “Let report(s) be called from DCP (Special Cell), who is dealing with the investigation of case FIR No.59/2020, PS Crime Branch (pertaining to criminal conspiracy) and DCP, 3rd BN, Delhi Armed Police (DAP) to communicate the reasons for moving such application(s) before this court.”

Note: This article has been updated with details on ASJ Rawat’s move to seek details on whose orders the handcuffing was done.

In an earlier version, the Karkardhooma court was wrongly identified as the Patiala House court in the first paragraph.