Neary 1,000 students are stranded in Kharkiv, according to reports. 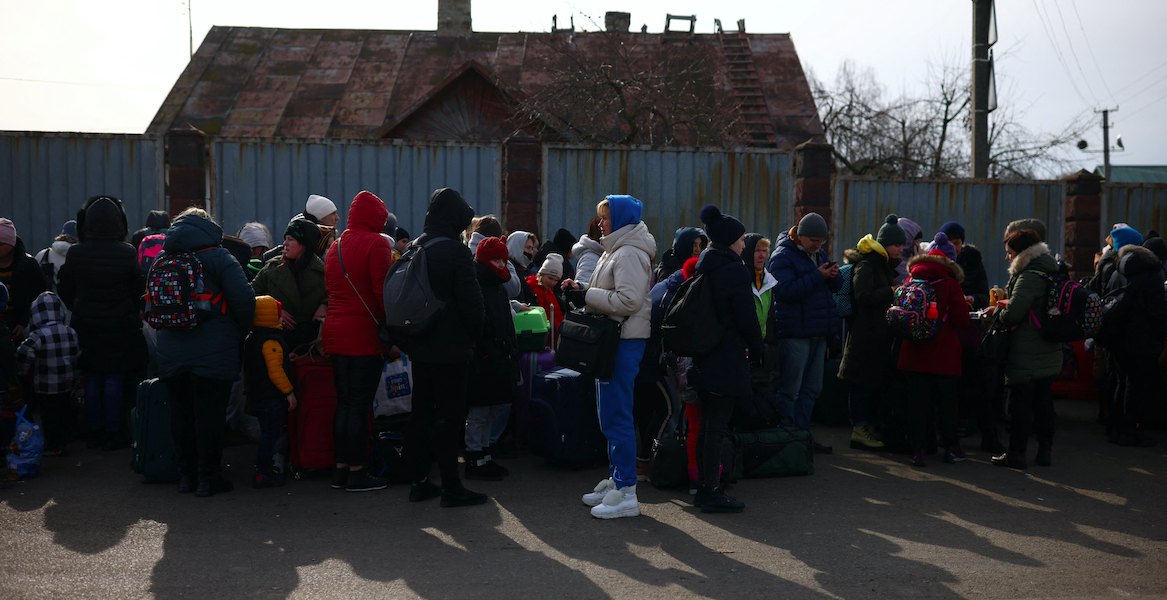 New Delhi: A day after an Indian student died in a Russian attack in the Ukrainian city of Kharkiv, the Indian embassy in Ukraine issued an urgent advisory – the first one to be issued in all capital letters – saying that all Indians in Kharkiv must leave before 6 pm local time today. The advisory was published on Twitter at 1:28 pm local time.

However, Indian students said that they are not being allowed into trains. Pragun, a student, told NDTV that the Ukrainians are not letting Indians enter, adding, “They are firing… kicking us.”

“We had a train in front of us but they are not allowing us. One or two gates opened for Ukrainian people. Just for them. And for us there are guns, bullets but no trains,” he said.

URGENT ADVISORY TO ALL INDIAN NATIONALS IN KHARKIV.
FOR THEIR SAFETY AND SECURITY THEY MUST LEAVE KHARKIV IMMEDIATELY.
PROCEED TO PESOCHIN, BABAYE AND BEZLYUDOVKA AS SOON AS POSSIBLE.
UNDER ALL CIRCUMSTANCES THEY MUST REACH THESE SETTLEMENTS *BY 1800 HRS (UKRAINIAN TIME) TODAY*.

Pooja Praharaj, a postgraduate student in Kharkiv who has been acting as a student coordinator for around 1,200 students during this crisis, told The Wire after the advisory was issued, “We are trying to leave ASAP. If we won’t be able to board a train we will leave by car.”

Meanwhile, the new Russian envoy to India has spoken of Moscow working on a  “humanitarian corridor” for evacuation through Russia and Prime Minister Narendra Modi has thanked the Polish president for easing visa demands.

The MEA spokesperson said the advisory was issued on the “basis of information from Russia”. He added that they should take any method to leave, including “on foot”.

JUST IN
Indian ministry of external Affairs spokesperson said that advisory issued by Indian embassy for nationals to leave Kharkiv by 6 p.m. local time was given on “basis of information from Russia” He added that they should take any method to leave, including “on foot”.

Several Indian students are apparently stuck near the Pivdennyi Vokzal Railway station, according to a tweet from the mother of a student. They are walking towards Pesochin, the woman said.

@IndiainUkraine my daughter with other 1000 Indian students are stuck at Pivdennyi Vokzal Railway station. Ukrainians soldiers are threatening to shoot if they try to aboard the train. A missile blasted near the station by the Russian fighter. Students trying to go underground.

The Vokzal railway station, where trains are stationed but only Ukranians are allowed to board, said student Pralay Kumar Nayak, who shot the video. Indian students have been asked to walk 10-15 kms away to suburbs of Kharkiv to reach safe zones @scroll_in pic.twitter.com/PJKdKT2DKA

According to Scroll, Abdul Zaheer, an agent who was helping students get admission in Ukraine, said buses or trains were not available for students to leave the city. “We tried to find all the options,” he said. “Students have to walk outside the city.”

Earlier, the Indian embassies in Poland and Lithuania had issued urgent advisories asking Indian nationals in the cities of Lviv and Tempoli to go towards the Budomierz border point between Ukraine and Poland.

The Indian embassy in Warsaw has suggested they alternatively move towards border points with Hungary and Romania.

The embassy had called on Indians to avoid the Shehyni-Medyka border point due to its congestion – reports of Indians stranded there without food and in the snow had occupied headlines in the past few days.

Later in the day the Warsaw embassy also announced a phone call between Prime Minister Narendra Modi and the Polish president Andrzej Duda over relaxation of visa requirements.

Meanwhile, the ninth flight carrying 218 Indian nationals who were stranded in the country has reached New Delhi from the Romanian capital Bucharest.

Earlier, another flight from Bucharest with 182 Indian nationals had reached Mumbai.

Six flights have now departed for India in the last 24 hours. Includes the first flights from Poland.

More than 1,337 Indians have been transported back, wrote Jaishankar.

India is at present evacuating nationals by moving them via land routes to Romania, Hungary, Poland and Slovakia, and then flying them out from there.

Russia has begun bombing parts of Ukraine’s capital Kyiv, from where the Indian embassy had on Tuesday, March 1, advised nationals to urgently leave.

India had “strongly and emphatically” asked Ukraine and Russia to create “urgent safe passages” for the Indian nationals stuck in various conflict zones in Ukraine, after the medical student from Karnataka was killed.

New Russian envoy to India Denis Alipov has said that Moscow is working on making a “humanitarian corridor” for safe passage of Indians through the Russian-Ukrainian border.

This is Alipov’s first address as ambassador-designate and he has not yet presented his credentials to the President, as is the norm.

As all Indian nationals have left the Ukrainian capital, the Indian embassy is now setting up an office in Lviv, Indian foreign secretary Harsh Vardhan Shringla said on Tuesday.

Russia bombed a TV tower in Kyiv and rained rockets on Kharkiv as Moscow intensified its bombardment of Ukrainian urban areas in a shift of tactics after its six-day invasion stalled. 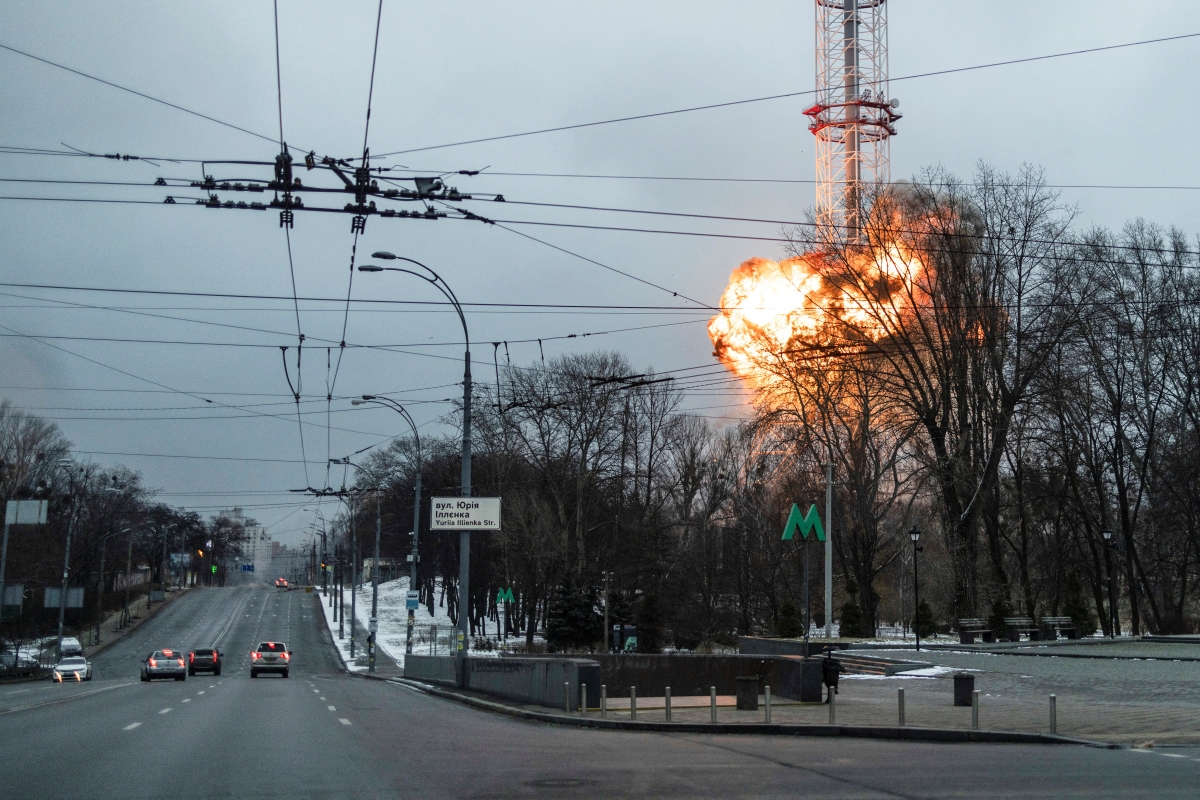 A blast is seen in the TV tower, amid Russia’s invasion of Ukraine, in Kiev, Ukraine March 1, 2022. Photo: Reuters/Carlos Barria

A US official said a miles-long armoured column bearing down on the capital Kyiv had not made any advances in the past 24 hours, frozen in place by logistics problems, short on fuel and food, and perhaps pausing to reassess tactics.

In a joint interview with Reuters and CNN, Zelenskiy also urged NATO members to impose a no-fly zone to stop Russia’s airforce, something the military alliance has ruled out.

Zelenskiy, who also spoke by phone for 30 minutes with US President Joe Biden on Tuesday, said the artillery barrages on the eastern city of Kharkiv amounted to “state terrorism”.

Note: This report is being updated as and when relevant news comes in.