Udupi: Hijab Wearing Students Allowed Into College, Made to Sit in Separate Room

The decision has sparked concerns about segregation. 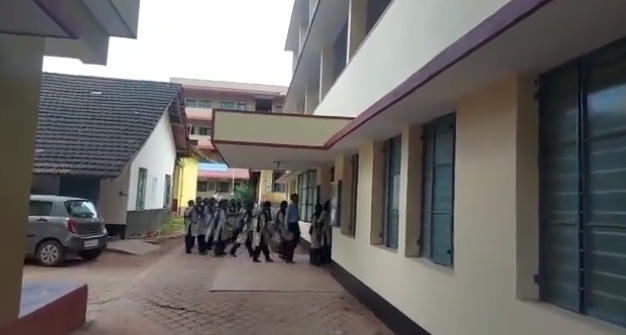 A photo of the Udupi college. Credit: Twitter@KeypadGuerilla

New Delhi: The Government PU College in Kundapur in Udupi on Monday allowed students in hijab to enter the college, but were asked to go to a “separate room”, sparking concerns about segregation.

Several government schools in Udupi have barred students wearing the hijab or burqa from entering the college. Recently, the BJP government has passed an order asking students to wear only uniforms, despite the fact that many Muslim girl students have been wearing hijab (headscarves) for many years.

According to news agency PTI, the principal of the Government PU College in Kundapur spoke to the Muslim girl students who came wearing hijabs and explained to them the government’s order. The students insisted on wearing the headscarves, after which they were asked to go “to a separate room arranged for them”.

According to reports, the principal said this was to “prevent crowding near the gate” and they would not be allowed to attend classes.

Karnataka: Students wearing hijab allowed entry into the campus of Government PU College, Kundapura today but they will be seated in separate classrooms. Latest visuals from the campus. pic.twitter.com/rEE8HfVzR1

The students said they will wear the shawls if hijab-wearing girls were allowed in classes. They agreed to enter the classes removing their shawls only after the principal assured them that no hijab-wearing students will be allowed to enter classrooms.

At the Kalavara Varadaraj M Shetty Government First Grade College in Kundapur, students in hijab were sent home, according to NDTV.

The TV channel reported that with the Karnataka high court set to hear a plea on the issue on Tuesday, two colleges declared Monday a holiday. Five women from a government pre-university college in Udupi have filed the plea, questioning the restriction on hijab.

The issue began last month at the Government Girls PU college in Udupi district, when six students were barred from classes for wearing the hijab. Right-wing groups in the region have long objected to wearings hijabs in school.

“The constitution has given the right to practice any religion which means one can wear any clothes according to their religion. Prohibiting ‘Hijab-wearing students from entering school is a violation of fundamental rights,” he said.