There are 30 rooms in the building and 18 were occupied at the time of the incident. 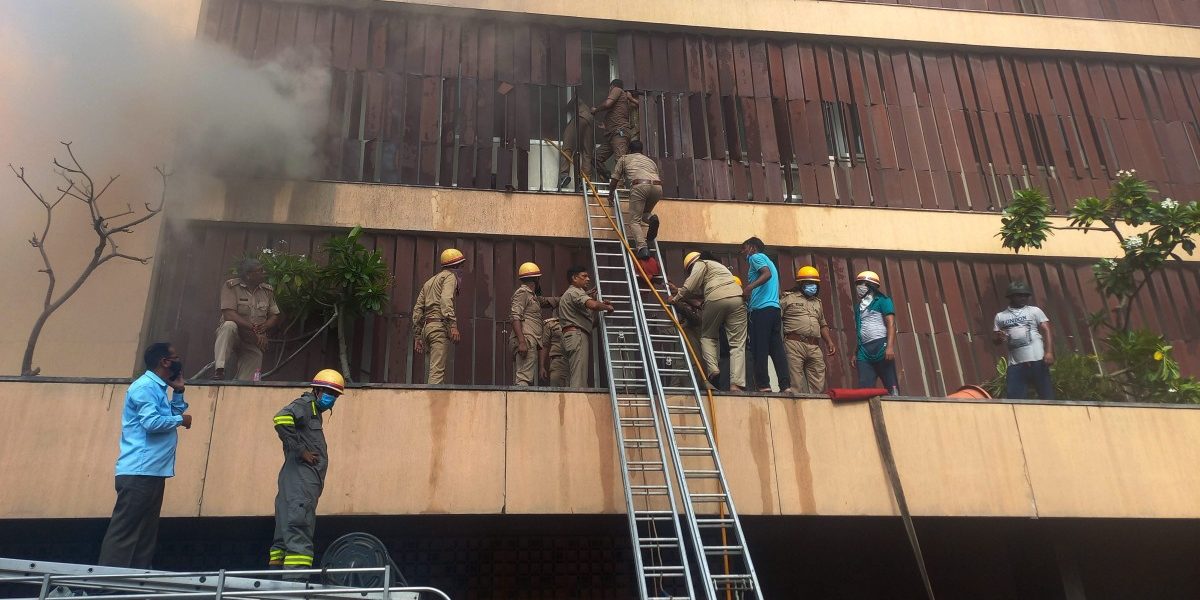 Fire Brigade personnel try to evacuate people after a fire broke out in a hotel in Hazratganj area of Lucknow, Monday, Sept. 5, 2022. Photo: PTI

Lucknow: Two people died after a fire broke out at a hotel in Hazratganj area of the city on Monday even as rescue teams continued to inspect the premises to check if someone was trapped inside, police said.

“According to the hotel owner, there are 30 rooms in the building and 18 were occupied at the time of the incident. There were 35-40 people there and some had left the hotel in the morning,” District Magistrate Suryapal Gangwar told reporters.

“Fire teams are on the job and many people were taken out of the hotel and have been rushed to the hospital,” he said.

#WATCH | Uttar Pradesh: Fire breaks out at a hotel in Hazratganj in Lucknow. Efforts underway to evacuate the people in the hotel rooms. Details awaited. pic.twitter.com/gxKy6oYyOO

Asked about the cause of the incident, the official said, “It may be due to a short-circuit. The exact cause is being ascertained. The hotel owner told us that there is a banquet on the first floor where something happened.”

Adityanath reached the hospital and inquired about the health of the injured. He also directed the officials concerned to provide best treatment to the injured.

#WATCH | Window panes of rooms at Hotel Levana in Hazratganj, Lucknow being broken to facilitate rescue and relief operations.

DG Fire says, "Rooms are filled with smoke making it difficult to go in. Work is underway to break window panes and grills, 2 people have been rescued" pic.twitter.com/6Hh5wdN6A9

Deputy Chief Minister Brajesh Pathak said two people lost their lives in the incident, adding that a probe has been ordered into the incident and strict action will be taken against the guilty.

“We will also see that recurrence of such incidents do not take place and for this, directives will be issued for the entire state,” he said.

The minister added that free treatment will be provided to the injured.

Fumes were seen coming out of the hotel, creating panic in the area. Fire teams had a tough time dousing the flames after breaking the glass panes.