Among the accounts that were withheld are those belonging to the magazine 'Caravan', the farmers' protest account Kisan Ekta Morcha and several independent journalists and activists. 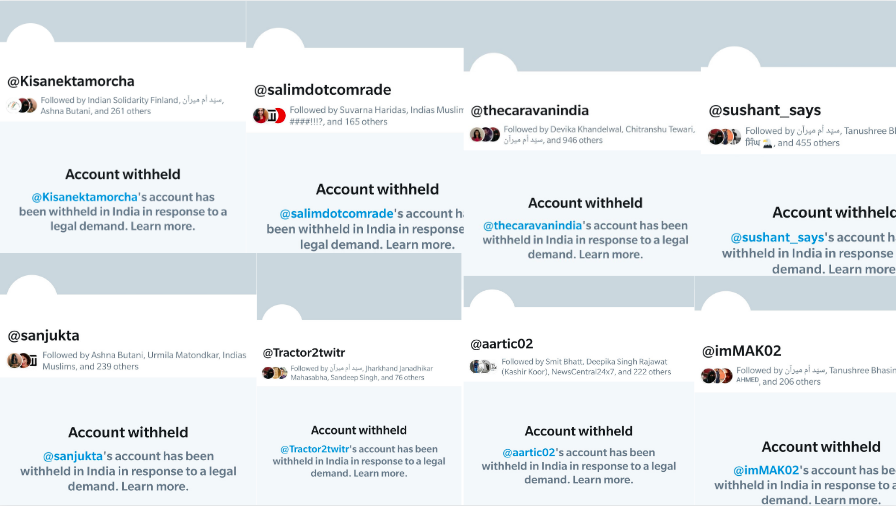 Screenshots of the accounts that have been abruptly withheld by Twitter. Photos: Twitter/@zoo_bear

New Delhi: A slew of Twitter accounts – belonging to individuals, groups and media organisations – were withheld by the social media site in response to legal demands on Monday, February 1. The only common thread connecting these accounts is that nearly all of them had been posting updates and opinions on the farmers’ protests regularly.

By 9 pm, most of the accounts were back and functional. It is not known as to what triggered the reversal of the decision.

The news agency ANI quoted unnamed ‘sources’ as having said that Twitter made the move on the request of the Union home ministry headed by Amit Shah.

In addition, the source allegedly told ANI that the Ministry of Electronics and IT (MEITY) directed Twitter to block around 250 tweets and Twitter accounts which were using the #ModiPlanningFarmerGenocide hashtag and “making fake, intimidatory and provocative tweets on January 30”.

This was done on the request of Ministry of Home Affairs and law enforcement agencies to prevent any escalation of law and order in view of the on-going farmer agitation: Sources

Several tweets containing the #ModiPlanningFarmerGenocide hashtag and the accounts from which they were made continued to be active on Twitter even after the selected accounts were withheld. It is not known why Twitter did not suspend the hashtag entirely if the Union home ministry had objected to it on legal grounds. 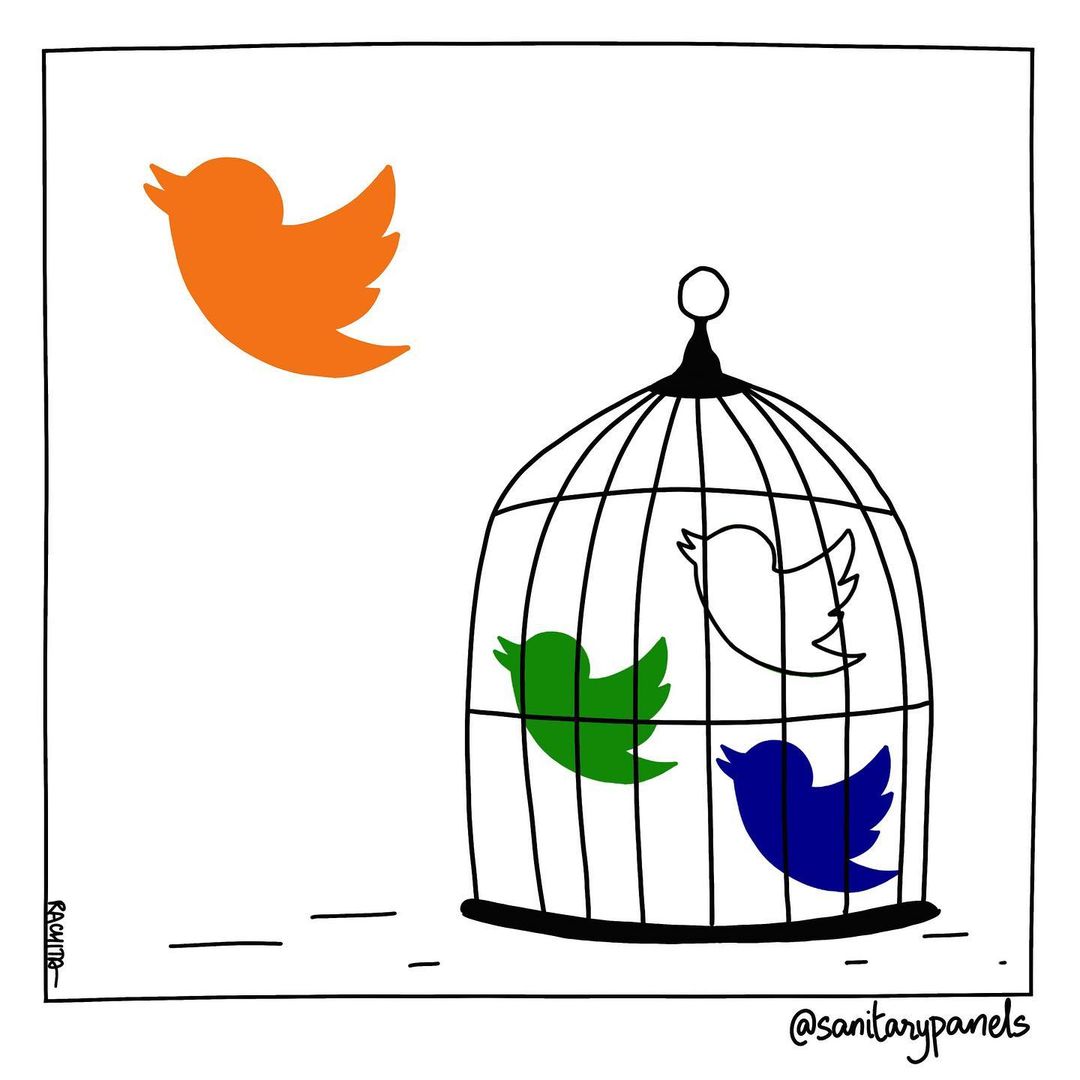 Several hashtags with violent overtones trend on the site daily. Hashtags which glorify Gandhi’s assassin Nathuram Godse trended on January 30, the anniversary of the assassination. There is no information as to whether the MHA has objected to these.

Most of the withheld accounts have follower counts that run into lakhs.

Among them are the accounts of the magazine Caravan (@thecaravanindia). Accounts which had been set up to ensure smooth communication of updates from farmers’ protesting against the three laws, like @Tractor2twitr and those of the Kisan Ekta Morcha (@Kisanektamorcha) and Bharatiya Kisan Union’s Ekta Ugrahan faction (@bkuektaugrahan) were also withheld.

In December, 2020, Facebook had run into controversy after abruptly removing Kisan Ekta Morcha’s account. The site had restored it after a few hours.

The withholding of Caravan‘s Twitter account came a day after magazine contributor Mandeep Punia was detained and then sent to 14 days’ judicial custody. Journalist Pranav Dixit quoted a source as having said that Twitter did not inform the magazine about the action. This was later confirmed by the magazine’s executive editor Vinod K. Jose, who also told The Wire that the magazine’s Twitter account had never used the hashtag.

The magazine’s editors are among those against whom sedition FIRs have been registered in four BJP-ruled states for coverage of a farmers’ death on January 26, during the tractor rally.

A popular parody account, @EpicRoflDon, had also been withheld.

Of them, nearly all accounts have been restored. Sandeep Choudhury’s account appears to have been deleted.

The news agency ANI reported that Twitter responded to the action with the following statement:

“In our effort to make our services available to people everywhere, if we receive a properly scoped request from an authorized entity, it may be necessary to withhold access to certain content in particular country.”

The social media site also said users are notified “promptly” in such situations.

Twitter, in a glossary on the policies governing it, mentions, “If you see the above message [announcing that an account has been withheld], it means Twitter was compelled to withhold the entire account specified (e.g., @username) in response to a valid legal demand, such as a court order.”

Among those who can request for an account to be removed are “a law enforcement agent, government official, or other third-party intending to submit a valid legal request,” Twitter says.

The Wire had sought a response from Twitter on these decisions, but the response received was the same as ANI‘s representation of the statement and did not add to the understanding of the situation.

Twitter has also not explained what led to the decision to restore the accounts.

The case of the Prasar Bharati CEO 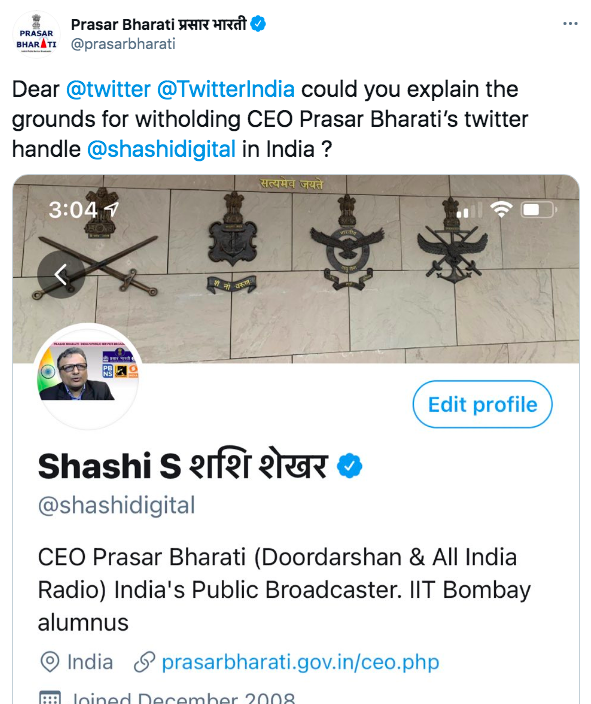 However, ANI‘s tweeted report on a response from Meenakshi Lekhi, the chairperson of the Joint Committee of Parliament on Data Protection Bill, suggests that it was the Prasar Bharati CEO himself who asked Twitter to withhold the other accounts, inadvertently getting his own withheld.

When real intelligence is missing, this is what happens. It strengthens case for Artificial Intelligence mechanisms to be fair. By blocking the handle you’re victimising person who told you to take right step:M Lekhi,Chairperson, Jt Committee of Parliament on Data Protection Bill https://t.co/M352wr9Lqt pic.twitter.com/IO9K2quEll

By 7 pm on February 1, Twitter had restored Vempati’s account. His pinned tweet now is one which expresses satisfaction that Twitter has taken note of the hashtag in question, which he had flagged on January 30.

Good to see action taken on this issue. https://t.co/aoDYg85Vgh

Note: This article is being updated as more developments take place.