The snapshots of his comments furnished by the state government also include one opposing the Citizenship (Amendment) Bill. New Delhi: A doctor attached to the Agartala Government Medical College & GBP Hospital has been suspended by the Tripura government for a social media comment directed at chief minister Biplab Kumar Deb.

The tweets and a Facebook post furnished by the government to the doctor, Kaushik Chakraborty, also include a comment opposing the BJP’s attempt to bring the Citizenship (Amendment) Bill prior to the last general elections.

Among other portfolios, the chief minister is also in charge of the health and family welfare department.

Local news reports said Dr Chakraborty, an assistant professor at the department of pharmacology at the state-run hospital in Agartala, was issued a show cause notice by the health and family welfare department on August 2. The charges lobbed at him were:

Sources at the state health department told The Wire that the show cause notice asked him to explain “why disciplinary proceedings should not be initiated against him for such misconduct.”

Dr Chakravarty, also the officer on special duty in the Directorate of Medical Education, replied to the notice on August 19, stating that he would not be able to respond to the allegations “unless I (he) get (s) the copy (s) of the said remarks”.

Sources said thereafter, Chinmoy Biswas, director of medical education, wrote a letter to the doctor on August 31 supplying him snapshots of the comments that offended the chief minister.

Three tweets were pointed out by Biswas to the doctor. While one of them, posted on February 10, was showing his support to Pradyot Manikya Debbarman, then the state Congress chief, for opposing the Citizenship (Amendment) Bill, two others were in Bengali, posted early this year.

One of them, translated into English, would read: “Dear Biplabda, there is no Nobel Prize for speaking nonsense! You are in a respected position and don’t become a laughing stock for the rest of India. This government has come after a lot of struggle and the people of Tripura have a lot of hope from it. Don’t disappoint us all.”

This was in response to a series of bizarre statements made by the chief minister hitting headlines nationally.

The doctor was asked to send a reply within the next ten days.

Also read: Before the Supreme Court, a Case of Free Speech vs Neutrality of State

In his reply on September 11, he stated that the comments were not made as a public servant but in the “capacity as a free citizen of a free country”. He though added that if those comments caused “any harm to anybody, it was totally unintentional” and tendered an unconditional apology for it. He also sought a closure of the matter as he would be careful the next time while making comments on social media even in his personal capacity.

Interestingly, a scrolling through Dr Chakravarty’s Twitter feed also shows that on March 6, while he reiterated his support to the protest in the state against the Bill, he also congratulated the chief minister for the state police detaining some youth with alleged links to a terror outfit in Bangladesh. 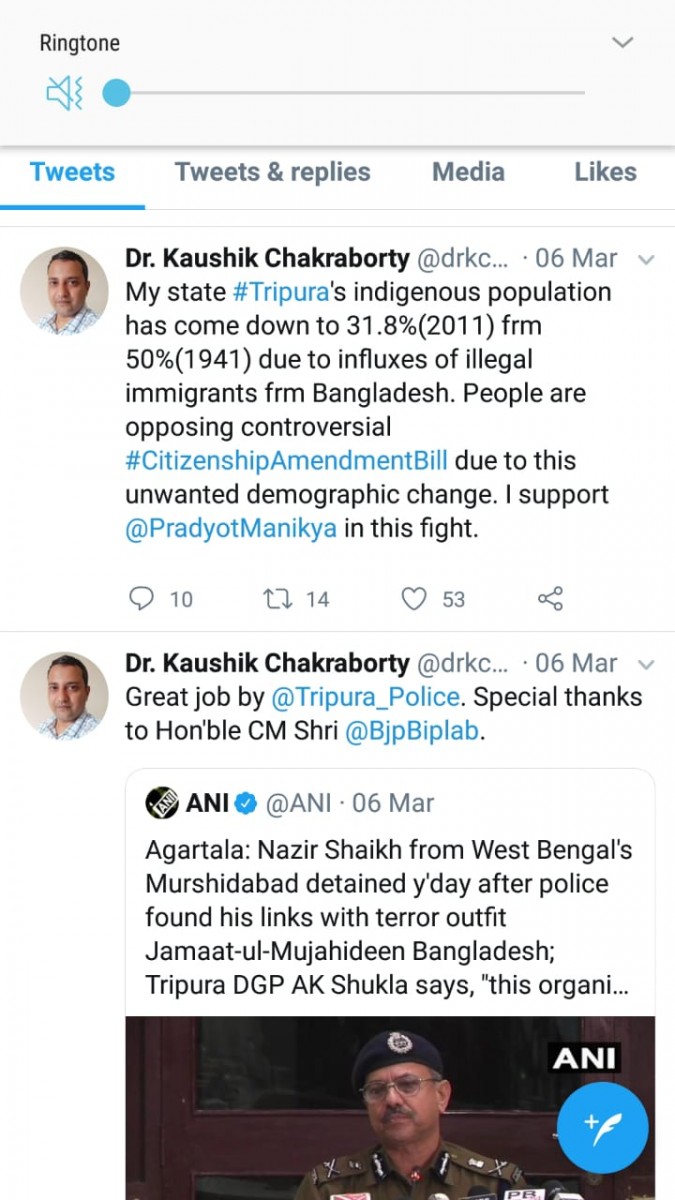 However, not satisfied with his apology, the government issued him a suspension order on October 21, also stating that he would not be allowed to leave Agartala without prior permission.

“The doctor has a sick child who needs periodic treatment outside the state. From now on, he will have to take permission from the state government to take him for his checkup,” stated a health department official.

On being contacted, the doctor refused to comment on the matter.