The fact-finding committee in its report has alleged that the government is trying to protect the accused forest officials by labelling the tribals as 'habitual offenders'. 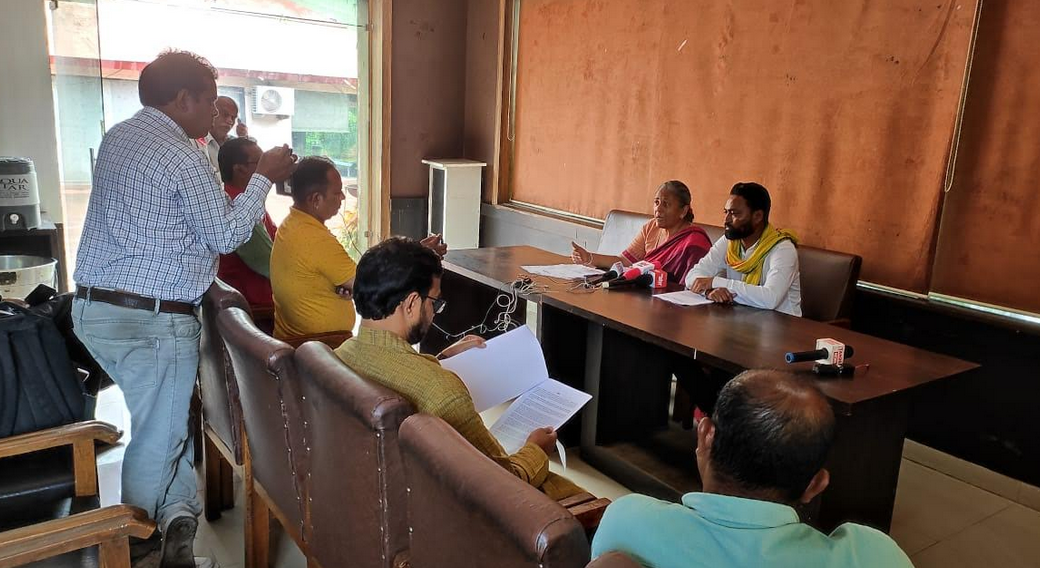 A photo of the fact-finding committee. Credit: author provided

New Delhi: Last month, a 35-year-old person from the tribal community was allegedly killed by forest officials in Madhya Pradesh’s Vidisha district on “suspicion” of timber smuggling. Nearly a month later, on September 5, a fact-finding team visited the village.

The team has alleged, while presenting its report at a press conference on September 13, that the state government is trying to protect the accused forest officials in the judicial probe by labelling the deceased person and the tribals as ‘habitual offenders’.

Chain Singh was shot dead by the forest department officials in the state’s Lateri tehsil on August 9; ironically, the day is also celebrated as International Tribal Day.

Singh is a tribal resident of Raipura village in Lateri tehsil.

The incident occurred 80 kilometres away from Vidisha district headquarters around 10 pm in the tribal village of Khatiyapura. The incident happened when Singh was returning with his brother Mahendra Singh and fellow villagers.

Singh’s brother and three others sustained bullet injuries in the alleged police firing.

It happened when he along with 9 others returning from Forest after collecting dry woods. 3 others got injured.

In its 14-page report, the fact-finding team alleged, “Forest cops opened fire on unarmed tribals killing one while five others were injured, including a cow. Three-four days after the incident, the police ‘secretly’ lodged a first information report against the tribals on the complaint of the forest officials.”

As per the Supreme Court’s directions, all FIRs should be uploaded on the website within a week, however, this FIR has not been uploaded even after one month. The police also refused to share any details of the FIR lodged against the tribals. 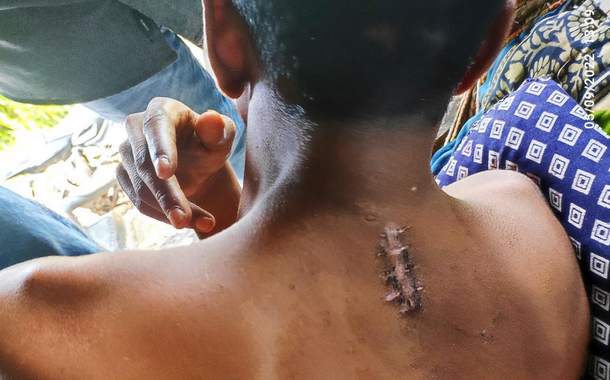 However, three days later, the police lodged an FIR against two forest officials based on the complaint of Chain Singh’s brother, Preetam Singh. The case was lodged under Indian Penal Code Sections 302 (murder), 307 (attempt to murder) and 34 (acts done by several persons in furtherance of common intention) at the Lateri police station.

However, the team said in its report that one of the accused, Nirmal Singh Ahirwar, who led the team into the forest to check timber smuggling, got bail on September 3, even before the judicial probe had started.

The report highlighted that according to the laid down rules on using firearms, the cops first have to open fire in the air as a warning. And, then, if needed, to the legs. “But all those who got bullet wounds are above the waist,” the report pointed out. 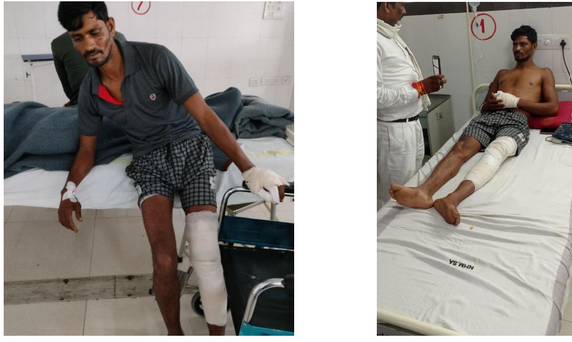 The other fellow villagers also got injured in the alleged police firing in Madhya Pradesh’s Vidisha district. Photo: fact-finding report

Meanwhile, facing backlash from tribal outfits, the state government had on August 10 announced an ex-gratia of Rs 25 lakh to the next of kin of the deceased, along with a government job and Rs 5 lakh each for the injured persons. It also ordered a judicial probe into the incident led by retired judge V.P.S. Chouhan.

Home Minister Narottam Mishra announced an ex-gratia of Rs 20 lakh to kin and of deceased and 5 lakh to injured.

“Forest officials who opened fire have been suspended. And a judicial probe has been initiated.” He said. pic.twitter.com/vCa7MxBGnC

However, the report alleged that the investigation had not started even two weeks after the state government’s order.

Speaking to The Wire, a day after the incident, Rajvir Singh, the divisional forest officer (DFO) of Vidisha said, “The South Lateri range staff had received a tip-off about timber smuggling near Raipura village. A team from the forest department led by deputy ranger Nirmal Singh Ahirwar reached the area. The team was armed with the government-issued Mossberg 12-gauge pump action shotguns.”

“When officials tried to stop them, they began pelting stones. The timber smugglers had placed a motorcycle to block the forest officials’ way. Under attack in the dark, they fired in self-defence,” DFO Singh said.

Vidisha DFO Rajveer Singh said, “Police got a tip off from informers that a group of people cutting the woods and smuggling it with bicycle.”

The report pointed out, “The forest department claimed that they [the tribals] were ‘habitual offenders’ who were smuggling timber and attacked cops with stones after getting caught red-handed, forcing them to open fire in self-defence. Yet, no forest official got injured in [the alleged] stone pelting or with any attack, while the four tribals got heavily wounded and one was shot dead.”

In a turn of events, a day after the FIR was lodged against the forest officials, several others from the department, including rangers and guards, surrendered their weapons and boycotted the government in their respective offices in different areas of Madhya Pradesh.

Several unverified videos, with the caption ‘dekhye kaise chori ho rahi hai jangalo se lakdiya’ (See how wood is being stolen from the forests), had also surfaced on social media.

After backlash from the department, state forest minister Vijay Shah, who himself belongs to the tribal community, told reporters in Indore, “No action will be taken against the officials/staff before the judicial probe team submits the report.”

However, Madhuri, in the press conference, said, “The forest department and the government ran a campaign on social media and media to brand the victim tribals as ‘teak wood smugglers’ and ‘habitual offenders’, which is untrue.”

“None of the tribals were found with stolen wood, firearms, axes or booked in any case except Chain Singh. Singh was booked in a year-old case, whose investigation is [still] underway,” she added.

Tribal rights activist Suneel Kumar Adivasi, who’s also part of the fact-finding team, pointed out, “If they [the tribals] were ‘habitual offenders’ and criminals, then why did the government offer ex-gratia and a job to the kin of the deceased and financial aid to the injured?”

The report further said that Vidisha district collector, Umashankar Bhargav, admitted that the tribals are not habitual offenders nor smugglers.

The fact-finding team has mentioned this incident in its report, adding that “despite the judicial report, no action has been taken yet.” Added to that, the suspended officer was reinstated later.

The team has demanded the arrest of the accused officials for allegedly killing Chain Singh, a judicial probe without any delay, and an initiative by the district administration to provide employment to the tribals of the region. It has also asked the authorities to “catch the real smugglers instead of killing unarmed tribals and making them a scapegoat”.