The TMC government has so far dealt with land acquisition carefully. But now, tribals' allege that blurred lines of what is legal mining and what is not will stand to affect them adversely. Kolkata: On Thursday night, barely a few hours after West Bengal chief secretary Rajiva Sinha flew to Birbhum district in a chopper, to attend a meeting with the local administration and political leadership of Mohammad Bazar area and start preliminary work of mining in Asia’s largest coal block, Chief Minister Mamata Banerjee wrote on Twitter that this coal project would stand as a model of development in the country.

“We will create a model for India to execute large projects like Deocha Pachami Coal Block. This shall be done in phases & with full public support by adopting best mining practices in a time bound manner…” Banerjee tweeted.

We will create a model for India to execute large projects like Deocha Pachami Coal Block. This shall be done in phases & with full public support by adopting best mining practices in a time bound manner. Wheels of development in Bengal won’t stop even in times of crises. (2/2)

Referring to the meeting in Birbhum, she wrote that the entire coal mining project was explained at length and “all queries by the relevant stakeholders were addressed.”

Mining at Deocha-Pachami-Harinsingha-Dewanganj coal block is the biggest economic project taken up by the Mamata Banerjee administration since coming to power in 2011. According to the chief minister, this project is expected to draw investment to the tune of Rs 12,000 crore and generate employment for one lakh people.

Evidently, with the 2021 Assembly elections expected in less than a year, her government has started highlighting this project as a game-changer for state economy.

However, the process of starting work seems unlikely to happen without hindrances. A section of local tribal people who are likely to be evicted for this project staged a demonstration a few hundred meters away from the school building in Mohammad Bazar where the discussion between Sinha, other government officials, panchayat representatives and local stakeholders took place on Thursday.

The agitators submitted a memorandum with the additional district magistrate, stating that they did not want this new mining project and alleging that the actual people who were going to face eviction had not been invited to the meeting. They held another meeting on Friday.

“We do not know if the memorandum was handed over to the chief secretary or not but the thing is that local tribal people do not want this project and that the real stakeholders were not invited to the meeting,” said Sunil Soren, a schoolteacher and leader of Birbhum Adibasi Gaota.

He said that nearly 18,000 residents of 34 villages will be evicted due to the project and that tribal people dominate the demography in 30 of these villages. 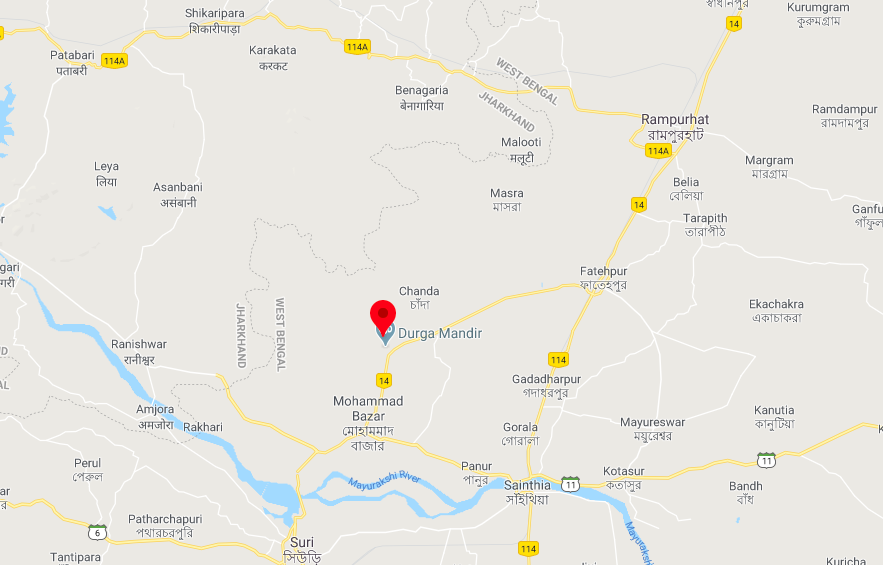 The red Google maps pin shows the location of the coal block.

The Gaota has been an influential organisation among the tribal-dominated areas of Birbhum district in the southwestern part of the state. They group has a history of leading agitations against industrial malpractice and pollution and were operative particularly during 2010-2011. In June 2019, a Gaota-led protest brought to a halt the primary work of an open cast coal mining project at Gangaramchak village in Khoyrashole community development block in the same district.

When the project’s authorities tried to resume work in October, they were stopped again.

However, the outfit underwent a split after its former secretary, Rabin Soren, was expelled in December 2018. Rabin Soren now leads Paschimbanga Adibasi Gaota, which attended the meeting with the chief secretary on Thursday.

“We have listened to the government’s points. On July 18, we will discuss the whole meeting with the local residents to decide on the next move,” Rabin Soren said. 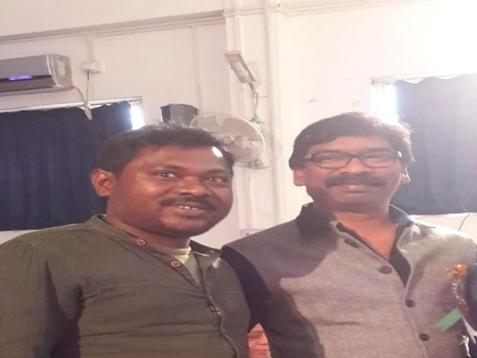 The coal block that has been allotted to West Bengal Power Development Corporation Ltd (WBPDCL) has an estimated reserve of 2,102 million tonnes. It got clearance from the Centre in July. Spread across 12.31 square kilometres, it is dubbed as world’s second-largest coal block.

Also read: During a Lockdown, Why Is the Mining Industry Considered ‘Essential’?

The area is already dotted with stone quarries and crusher units. The land is infertile and the groundwater level is low, resulting in only one crop a year. Hundreds of trucks form serpentine queues on roads leading to the areas under the jurisdictions of Bharkata, Hinglo, Puratangram and Sakedda gram panchayat.

Local residents are apprehensive because all businesses are not operating legally. According to them, there are four quarries that operate legally, while 21 others operate illegally and people involved in illegal ones are unlikely to be considered for compensation.

“In Deocha-Pachami area, many tribal people live on vested (government) land. Many who received patta (land rights) do not have their records updated. There is a genuine fear that several hundred people will be uprooted without proper compensation and rehabilitation,” Mani Hembram, a resident of Baromeshia village.

Dewanganj resident Babulal Tudu, a retired jawan of Border Security Force (BSF), echoed similar concerns. “Even if the government makes sure to adhere to rules, in the surrounding areas, mining will deplete the groundwater level and force our eventual eviction,” he said.

Protesters and opposition parties alleged that only those people close to the state’s ruling party, Trinamool Congress (TMC), were invited to the meeting. Bharatiya Janata Party (BJP) and the Communist Party of India (Marxist) have both hinted that they would be ready to support the agitators should they face any injustice.

“The meeting with the chief secretary was an eyewash. It was held not for interaction with the public but to finalise TMC’s own game plan about bulldozing any opposition,” alleged Shyamapada Mandal, the president of BJP’s Birbhum district unit.

Even though TMC’s controversial and loudmouth district unit president Anubrata Mandal is known to rule the district with an iron hand, BJP has recorded a significant rise in its popularity over the past couple of years.

“We are not against industries but there is a great deal of apprehension among the local tribal population because there has been no clarity as of now about the government’s compensation and rehabilitation plan,” said Ram Chandra Dom, a former Lok Sabha member from Bolpur and a state committee member of the Communist Party of India (Marxist).

TMC leaders of the district did not want to comment, saying the top leadership of the government was handling the matter.

Being a party that came to power riding waves of anti-land acquisition movements in Singur (2006-08) against the Tata Nano plant, and in Nandigram (2006-2007) against the Salem group’s chemical hub project, the TMC has dealt with the land issue very sensitively. 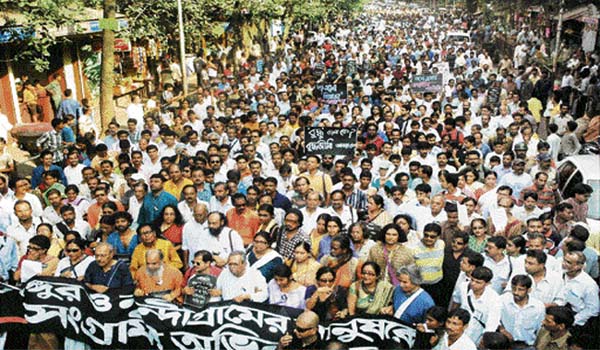 A protest in Kolkata against the violence in Nandigram. Photo: PTI/Files

When a group of protesters at Bhangar near Kolkata had nearly stalled a power grid project, during 2017-18, the government bought time and finally came to an understanding with the protesters before resuming work.

The government’s strict policy of acquiring no land for private industries has drawn criticism from the opposition parties for the state’s failure in drawing any major industry to the state during Mamata Banerjee’s regime.

Speaking on condition of anonymity, a senior TMC minister said, “We plan to start primary work before the elections. The idea is to first identify a small area where local residents can be taken into confidence and start work there. We can start operating in areas of possible trouble sometime later.”

Sinha on Thursday assured those present in the meeting that the government would take into account all sources of income, including farming, dependence on forest produces and working in stone quarries and crusher units.

“Cent percent rehabilitation will take place before work starts. However, we will be doing the project in phases and the first phase would be one about 400 acres of land, affecting about 2,000 people. We will try to start the work of exploration after the Durga Puja [in October]. It would take about one year and a half to start mining,” Sinha told journalists after the meeting.

In September 2019, Banerjee had invited Prime Minister Narendra Modi to inaugurate the project at a time of his convenience. BJP Rajya Sabha MP Swapan Dasgupta had promptly written to Modi, “cautioning” him against accepting her invitation, stating that the project was at an early stage, with no socio-economic or environmental impact assessment conducted yet.

The process of these surveys have only been initiated, according to a senior bureaucrat at the state secretariat.

Snigdhendu Bhattacharya is a Kolkata-based journalist with 15 years’ experience in writing on politics, security, history, environment, and socio-economic and cultural affairs. He authored ‘Lalgarh and the Legend of Kishanji: Tales from India’s Maoist Movement’ (HarperCollins India, 2016).