Sources told PTI that police had suggested the Kundli-Manesar-Palwal (KMP) Expressway instead of the Outer Ring Road. 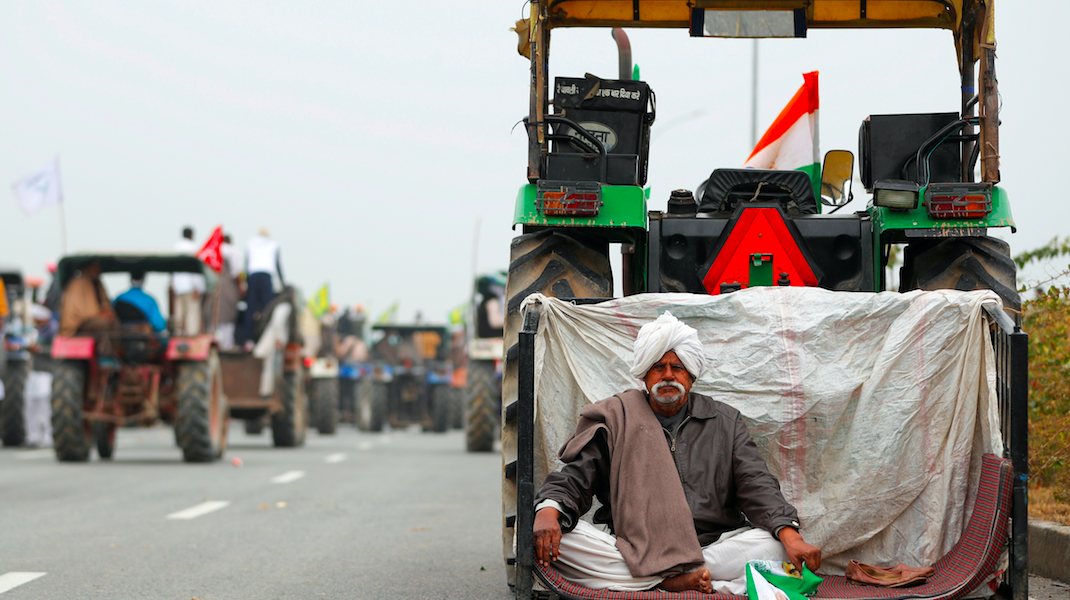 A farmer rests during a tractor rally to protest against the newly passed farm bills, on a highway on the outskirts of New Delhi, India, January 7, 2021. Photo: Reuters/Adnan Abidi/File Photo

New Delhi: The second round of meeting between the police and farmer unions regarding the proposed January 26 tractor rally  remained inconclusive on Thursday. Farmers stuck to their demand of taking out the rally on Delhi’s Outer Ring Road.

Taking to reporters after the meeting, Swaraj Abhiyan leader Yogendra Yadav said the police wanted the farmer leaders to carry out their tractor rally outside the national capital.

“We will conduct our parade peacefully inside Delhi. They wanted us to hold the tractor rally outside Delhi, which is not possible,” Yadav, who is actively participating in the ongoing agitation against the Centre’s new farm laws, said.

Sources said police had suggested the Kundli-Manesar-Palwal (KMP) Expressway instead of the Outer Ring Road.

A farmer leader, who attended the meeting with the police, said, “The government wants us to take out our rally outside Delhi, but we want to hold it inside Delhi. No decision was taken in today’s meeting.”

A similar meeting was held on Wednesday between the union leaders and officers of Delhi, Uttar Pradesh and Haryana police at Vigyan Bhawan to discuss the route and arrangements of the proposed rally on January 26.

Thousands of farmers, mostly from Punjab and Haryana, have been protesting at several Delhi border points against the Centre’s new agriculture laws for nearly two months amidst punishing temperatures. The unions representing the farmers have begun holding tractor rallies at villages in Punjab to mobilise people for the demonstration on Republic Day.

The farmers are vehemently opposing the Farmers (Empowerment and Protection) Agreement of Price Assurance and Farm Services Act, 2020; the Farmers Produce Trade and Commerce (Promotion and Facilitation) Act, 2020; and the Essential Commodities (Amendment) Act 2020.

Enacted in September last year, the three laws have been projected by the Centre as major reforms in the agriculture sector that will remove middlemen and allow farmers to sell their produce anywhere in the country.

However, the protesting farmers have expressed their apprehension that the new laws would pave the way for eliminating the safety cushion of MSP (minimum support price) and do away with the mandi (wholesale market) system, leaving them at the mercy of big corporates.