The professor at Government Arts College, Ooty says the authorities have been working in cahoots with her harasser to prove her wrong. She was even transferred out of the college.

New Delhi: When a woman professor at Government Arts College in Tamil Nadu’s Ooty accused a male professor of sexual harassment in February, little did she know that it was the beginning of a never-ending ordeal. In the ten months that the woman – who is from a Dalit community – has been fighting for justice, authorities have been working in cahoots with her harasser to prove her wrong, according to The News Minute.

Despite the Internal Committee (IC) on sexual harassment in the college holding the male professor guilty of the charges, no action has been taken against him yet. Instead, the woman was transferred to another college 150 kilometres away from Ooty. Other professors who belonged to the same caste as the harasser, protested against the woman and accused her of bringing disrepute to the college.

In the face of resistance from other staff members in the college, she continues to hold her ground, alleging that she was sexually abused, and discriminated against on the basis of her caste and gender after she had reported her harasser to the authorities. She had to move the Madras high court to obtain a stay on her transfer order.

It all began on February 23, when the woman professor in question, P. Devi, was targeted by Dharmalingam of the Tamil Department during an inspection at the college. Devi accused Dharmalingam of making sexually coloured remarks against her and commenting on her sex life – charges which the college Internal Committee later upheld. The remarks were made in the presence of the college principal, Eswaramoorthy. Both Dharmalingam and Eswaramoorthy belong to the Badaga community, which is a dominant caste locally and is categorised as part of the Other Backward Classes (OBCs).

Devi reported the matter to Eswaramoorthy on February 24, the day after the incident. The latter did accept that what Dharmalingam had done was wrong and that he would notify the IC against the sexual harassment complaint lodged by her. The principal also informed Devi that he had received an apology letter from Dharmalingam and would forward a copy of the same to the IC and to her once he returned from his vacation.

To her surprise, Devi learnt, on February 28, from the Committee head, A. Lourdu Mary, that no such notification and the apology letter, which Eswaramoorthy had promised to forward to the IC, were received. When Devi confronted Eswaramoorthy, he said oral complaints cannot be forwarded to the IC and sought a written complaint from her. He also refused to give the apology letter, which he claimed to have received, to allow her to attach the letter with her complaint.

On March 2, Devi filed her written complaint, which was then forwarded to the IC. The Committee carried out its inquiry into allegations levelled by Devi against Dharmalingam on March 10. In its report, on March 11, the IC found Dharmalingam guilty of charges levelled by Devi, besides listing down other complaints against him from other professors and students, according to The News Minute.

According to the Sexual Harassment of Women at the Workplace (Prevention, Prohibition and Redressal) Act, 2013, an IC on sexual harassment should hear and inquire into complaints of sexual harassment or misconduct. These committees are vested with powers to recommend to the institutional administrations to act against those proven guilty of charges. As per service rules, ICs can advise administrations to deduct adequate sums from the harasser’s salary within 60 days of the IC inquiry. However, in this instance, no such action has been taken against Dharmalingam.

With no action forthcoming against her harasser, Devi lodged a complaint against Dharmalingam at Ooty Town Central police station and also with the Director of College Education (DCE) on April 15. The DCE suspended Dharmalingam on the same day. On the other hand, police booked Dharmalingam under Section 354 A (1) (iv) of the Indian Penal Code (IPC), which pertains to making sexually coloured remarks and offence of sexual harassment, and Scheduled Castes and Scheduled Tribes (Prevention of Atrocities) Act. Dharmalingam is currently on conditional bail while the matter is still sub-judice.

However, things took a worse turn for Devi when Eswaramoorthy, the principal, was elevated to DCE (in charge) on June 22. The suspension of Dharmalingam had been earlier ordered by one Poornachandran, who was the DCE before Eswaramoorthy took over.

Soon Eswaramoorthy ordered another inquiry into the sexual harassment complaint against Dharmalingam, to be carried out by the Joint Regional Directorate of Collegiate Education (RJD-CE), Coimbatore. According to TNM, Devi and her lawyer questioned the need for another inquiry once the college IC had already declared Dharmalingam guilty.

“There is no provision in the Act to surpass the IC report to constitute a new committee for the same allegations,” said Praveena’s lawyer Rajaguru, speaking to TNM. “If the harasser needs to challenge the IC report or action, he should approach the court only.”

As part of the fresh inquiry, Devi and Dharmalingam were served notices to appear before a probe committee on July 27 and 28. The RJD-CE, after two days of inquiry, held that “there was no witness to prove the allegations made against Dharmalingam”, giving clean chit to Devi’s harasser.

Protesting her transfer order, Devi approached Madras high court. The court, on October 7, issued a stay on her transfer order. Even though there is a stay order, the harassment at the college in Ooty did not stop, she alleged.

Devi alleges that pressure was exerted on her to reach a ‘compromise’ with Dharmalingam to ‘settle’ the matter after she had lodged a complaint against him. “But I refused, and therefore, they tried to twist the case, claiming I filed a false complaint against him because he denied me a loan,” says Devi. 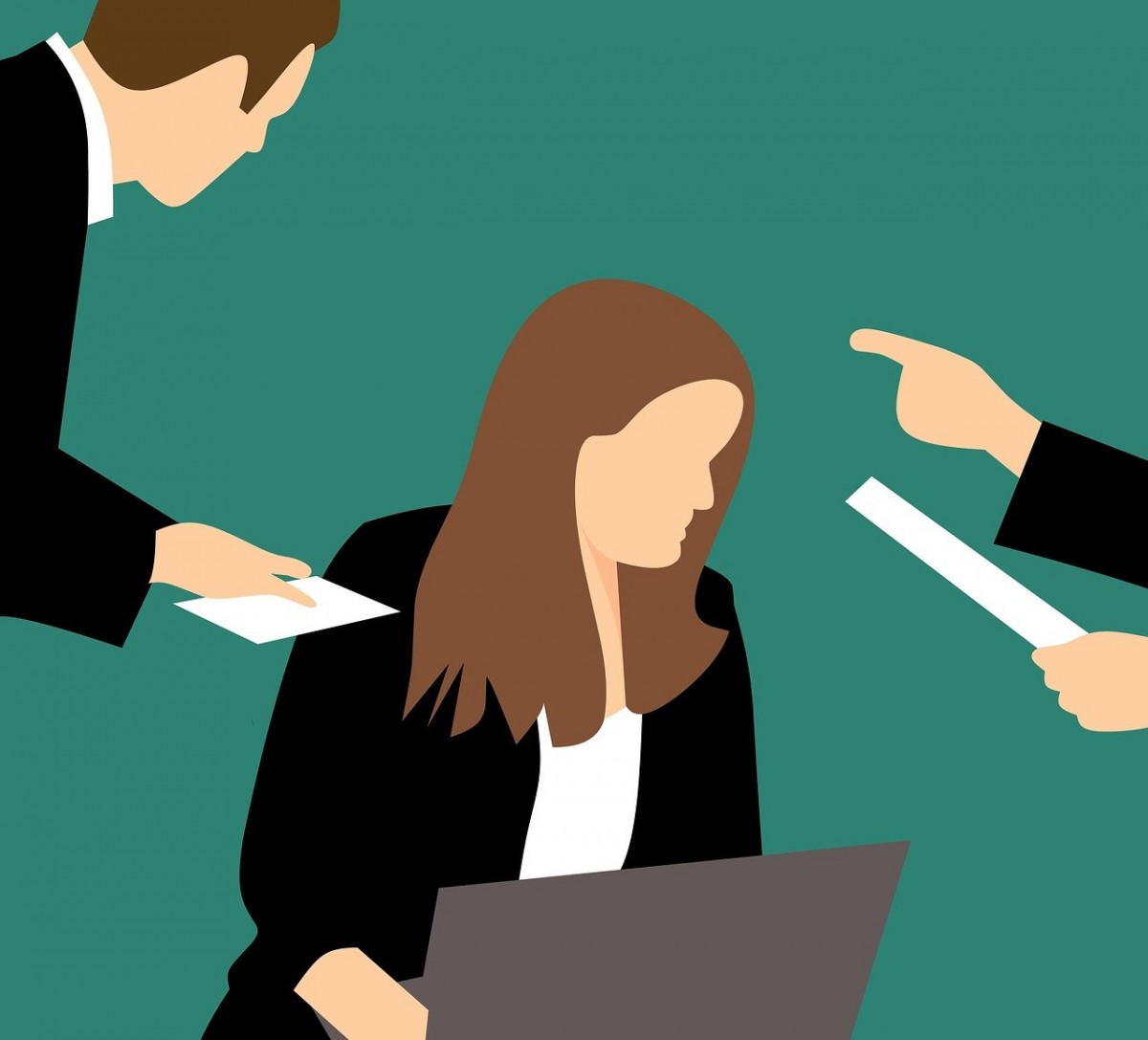 Meanwhile, Dharmalingam’s name also cropped up in a report carried by the Tamil news channel NewsJ, which dwelt on cases of sexual harassment at the Government Arts College, Ooty. Alongside Dharmalingam, a guest lecturer was accused of sexual harassment by two former students of the college. On September 29, two days after the news report, students from the college staged a protest demonstration against sexual misconduct and harassment faced by women students and staff members. The protest took place exactly two days after the transfer order was issued to Devi.

The protesting students only got to know about Devi’s transfer order after they ended their protest. However, those staff members who turned against Devi have since alleged that the students’ protest was instigated by Devi herself, bringing disrepute to the college.

“[Devi] is very student-friendly and supportive, so the college administration tried to connect her with the students’ agitation,” a student who took part in the protest told TNM.

Meanwhile, Devi resumed her job at the college in Ooty on October 31, after she secured a stay on her transfer order from the Madras high court. However, this did not go down well with lecturers from the Badaga community. They staged a protest against Praveena, demanding an “unconditional apology” from her.

The protests against her went on for four days, until November 4. They accused her of instigating students to protest against the college administration to push her case. Staff members from the Badaga community raised slogans against her: “Apologise”, ‘Don’t spoil the college name’, and “Don’t do sexual harassment drama”.

Dharmalingam is currently on conditional bail while the matter is still sub-judice.