The Peremptory Demolition of Slums is a Violation of the Law

The promise of acchhe din cannot be just for the well-off. A poor person too has the fundamental right to a dignified life under Article 21 of the Constitution. 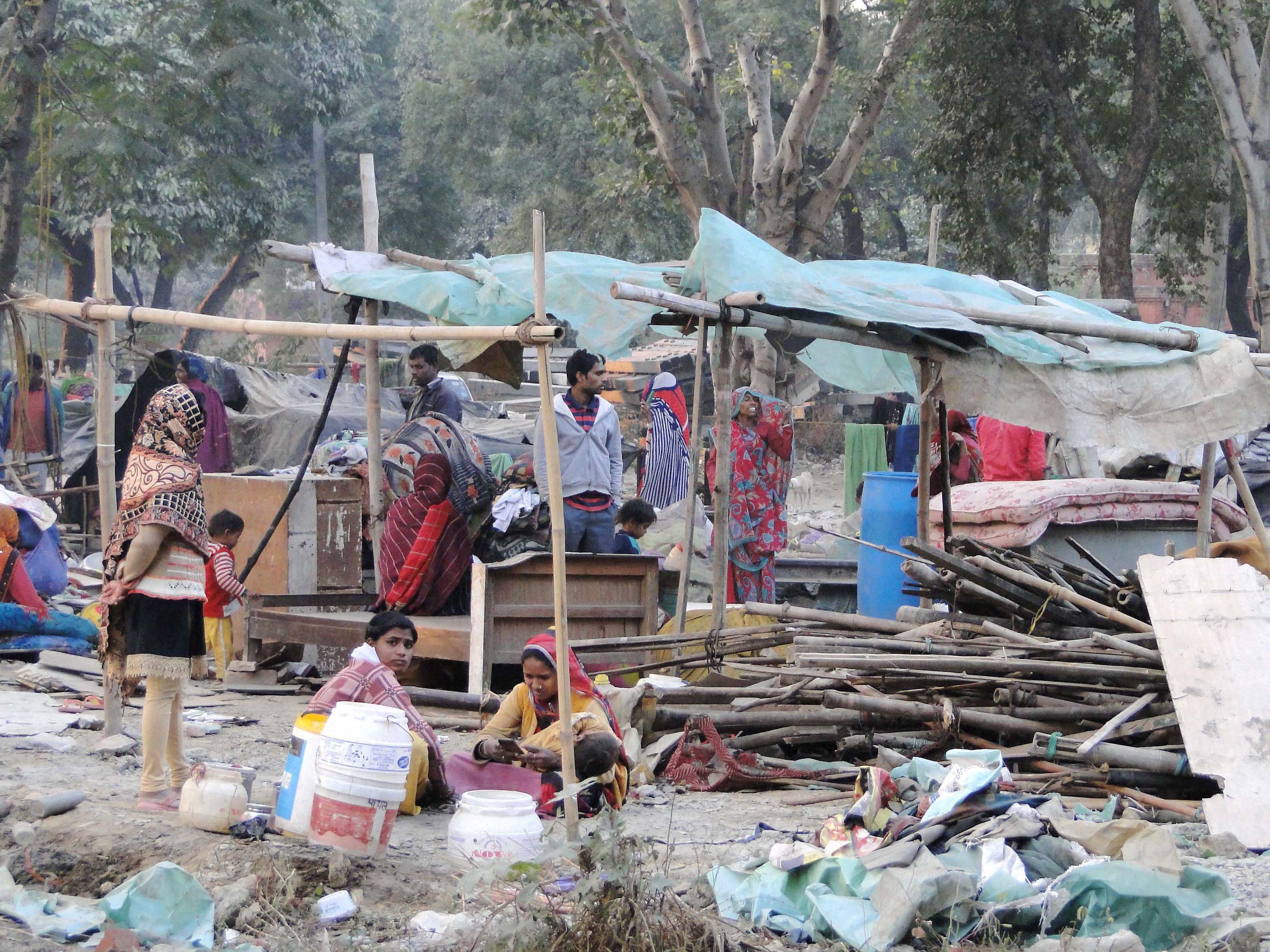 People collect their belongings after a demolition drive carried out by the railways in Shakur Basti of Delhi on Sunday. Credit: PTI

In a late night demolition drive on the night of December 12/13, the railway authorities razed more than 500 dwellings in the Shakur Basti shanty area in West Delhi.  As a result, a baby died and hundreds of families, including women and children, had to spend the night in the open in this cold weather.

When I was a judge in the Supreme Court, an appeal came before a bench in which I was the junior member. The appeal was against an order of the Delhi High Court directing demolition of shanties (jhuggi jhopri, or JJ clusters) and removal of encroachments on government land by the JJ  dwellers in Delhi.

My senior colleague yelled at the lawyer for the slum dwellers. “Your clients are illegal trespassers on government land. They must vacate it.”

“But where are they to go, my Lord ? ” asked their lawyer.

“Wherever they came from. That is not our concern. But they must get out,” said my colleague.

I intervened, and referred to the court’s decision of  in Olga Tellis vs. Bombay Municipal Corporation, a case relating to Bombay JJ dwellers, in which a 7-judge constitution bench of the Supreme Court had observed that the right to life guaranteed by Article 21 of the Constitution included the right to livelihood, and directed that alternative land should be given to the illegal squatters (i.e. JJ dwellers ) in Bombay.

I said that it was a human and social problem, and must be dealt with as such,  and not in an over-legalistic manner.  Surely these people cannot be thrown into the sea.

My remarks obviously annoyed my senior colleague, as he immediately ordered the case to be listed before another bench. What happened to the case thereafter I do not know.

It is true that there have been several illegal encroachments or illegal constructions on government lands in many cities in India over the years.

JJ dwellers are usually from the lowest strata of society. They were often poor peasants in rural areas who came to cities to eke out a living by working as manual labourers, hawkers, street peddlers, etc, much like the ‘Okies’ referred to by John Steinbeck in his great novel Grapes of Wrath.

The Okies were from Oklahoma, Arkansas and other states in the United States where they had lost their livelihood due to the Great Depression of the 1930s, drought and dust storms there. They migrated to California, which they imagined to be a land of abundance and plentiful jobs. But when they reached California they were greeted with intense hostility, and faced tremendous hardship there.

Similarly, the poor rural people who migrate to big cities in India in the hope of escaping from grinding poverty have found themselves living in miserable conditions in Delhi, Mumbai, Kolkata, and other cities. In other words, from out of the frying pan and into the fire.

It is true that most of them are illegal squatters on government land. But where else could they live ? Surely not in the air or in the Yamuna river?

Legally, they may have no right to remain there, but where are they to go? Land has become too costly, and they are too poor to afford rents. There are hundreds of thousands of such poor people. It is not just a legal problem. It is equally a human and social problem. We have to apply here not the 19th century positivist jurisprudence of Bentham and Austin, but the 20th century sociological jurisprudence of Roscoe Pound, by doing ‘ social engineering ‘.

In several decisions of the Supreme Court, e.g. Francis Coralie Mullin, vs Administrator, Union Territory of Delhi, it has been held that the word ‘life’ in Article 21 means a life of dignity, and not just ‘animal life’. In Uttar Pradesh Avas Evam Vikas Parishad vs. Friends Co-operative Housing Society Ltd., it has been held that the right to shelter is a fundamental right being part of Articles 19(1)(e) and 21 of the Constitution.

In Ahmedabad Municipal Corporation vs. Nawab Khan Gulab Khan,  the Supreme Court held that in view of the consistent influx of rural population into urban areas, and consequent growth of encroachments, local bodies (i.e. municipalities and panchayats) should prepare plans in accordance with Articles 243G and 243W of the Constitution for their settlement. The court observed:

“Right to residence is one of the minimal human rights as a fundamental right. Due to want of facilities and opportunities, the right to residence and settlement is an illusion to the rural and urban poor. Article 38,39 and 46 mandate the State, as its duty, to minimise inequalities in income and in opportunities and status. It positively charges the State to distribute its largess to the weaker sections of the society envisaged in Article 46 to make socio-economic justice a reality, meaningful and fruitful so as to make the life worth living with dignity.”

In Shantistar Builders v. Narayan Khimalal Totame, a bench of three judges held that the basic needs of man have traditionally been accepted to be three – food, clothing and shelter. The right to life is guaranteed in any civilised society. That would take within its sweep the right to food, the right to clothing, the right to decent environment and a reasonable accommodation to live in. The difference between the need of an animal and a human being for shelter has to be kept in view. For an animal it is the bare protection of the body; for a human being it has to be a suitable accommodation which would allow him to grow in every aspect – physical, mental and intellectual.

“These are basic human rights known to any civilised society. The civil, political, social and cultural rights enshrined in the Universal Declaration of Human Rights and Convention or under the Constitution of India cannot be exercised without these basic human rights. Shelter for a human being, therefore, is not a mere protection of his life and limb. It is a home, where he has opportunities to grow physically, mentally, intellectually and spiritually. Right to shelter, therefore, includes adequate living space, safe and decent structure, clean and decent surroundings, sufficient light, pure air and water, electricity, sanitation and other civic amenities like roads etc. so as to have easy access to his daily avocation. The right to shelter, therefore, does not mean a mere right to a roof over one’s head but right to all the infrastructure necessary to enable them to live and develop as a human being. Right to shelter when used as an essential requisite to the right to live should be deemed to have been guaranteed as a fundamental right.”

In sum, the Supreme Court has said that the right to life guaranteed by Article 21 of the Constitution includes the right to livelihood. And if a person is evicted from the place where he is residing (even if illegally) and his jhuggi demolished, he will certainly lose his livelihood too, for to work he must live somewhere. For this reason, the court directed in Olga Tellis that alternative land sites must be allotted to the JJ dwellers, not too far distant from their place of work.

In the light of the rights that citizens have under the Constitution, as upheld by the Supreme Court, it is clear that the peremptory action of the railway authorities in acting against the residents of Shakur Basti is highly condemnable. I can understand their desire to evict the illegal encroachments so as to create a new passenger terminal, but then a scheme should have first been prepared to provide alternative land to these poor people instead of just throwing them out in the cold. The land occupied by them should have been taken over after they were resettled.

The promise of acchhe din cannot be just for the well-off. A poor person too has the fundamental right of a dignified life under Article 21 of the Constitution.