The Mindset of Certain Kashmiri Pandits 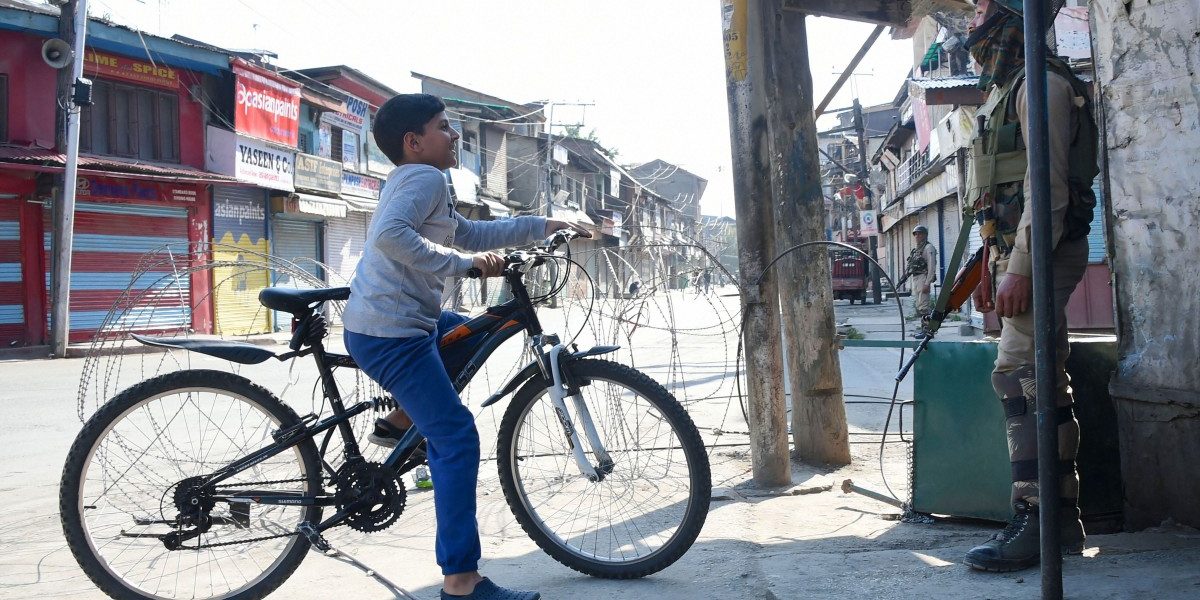 A young boy on a cycle speaks to a jawan in Srinagar on Wednesday, October 9. Photo: PTI

A few days ago, I wrote an article titled ‘An appeal to my Kashmiri brothers and sisters,’ published on indicanews.com. In this article, I mentioned that the restrictions in Kashmir for over 60 days after reading down Article 370 of the constitution on August 5 has made the lives of Kashmiris in the Valley (and also those living outside trying to contact their relatives) miserable. I said that the internet and mobiles are not luxuries but necessities today, and being deprived of them for even one day – let alone 60 days (along with curfews and other restrictions) – would make one’s life hellish.

I therefore appealed to Kashmiris to do the following:

After reading your latest appeal to Kashmiris, I would like to suggest you take the logical next step in your campaign by forming a Govt in Exile, like Subhas Chandra Bose. I am also certain that Imran Khan, who was after all reading from your script at the UN General Assembly in New York, will credit you swiftly as the President of the Govt of India in Exile.

“Those who greeted Narendra Modi in Houston were all my friends. They are not buffoons. I support them. We may have different beliefs, but we can be kind to each other and civilised.”

These emails reveal the typical mindsets of a number of Kashmiri Pandits.

I too am a Kashmiri Pandit, and I know what horrible atrocities were committed on them in the 1990s, leading to their exodus from the Valley out of fear. I wrote a piece on Kashmiri Pandits on my blog Satyam Bruyat several years ago, describing the wrongs done to them. So I have every sympathy for them.

But what I found in almost all members of my community is a blind hatred for Muslims, because of which they ignore the atrocities on Kashmiri Muslims.

After all, two wrongs don’t make one right. What was done to Kashmiri Pandits in the past was very wrong and condemnable. But does it justify and exonerate the wrongs being done to Kashmiri Muslims today? Moreover, the atrocities on Kashmiri Pandits were done a quarter of a century ago. The present Kashmiri youth were not even born then, or were toddlers. To blame them would be like blaming the present Germans for what the Nazis did to the Jews in the 1930s and ’40s.

The viciousness of the first email, making a personal attack on me, shows the mindset of most (not all) Kashmiri Pandits. They will not present cool, logical arguments, they will substitute them by abuse. If this gentleman is deprived of his mobile and internet for one day, he will raise merry hell, cursing those who inflicted this on him. But he is not bothered about people dying in Kashmir because they could not get proper medical attention since communications are shut down. He is not bothered about the tension in the minds of Kashmiris living outside the Valley since they are unable to communicate with their relatives. If such persons had been Hindus, probably he too would have condemned the restrictions, but since they are Muslims, he probably thinks they deserve it.

As for Imran Khan benefiting from my appeal, let me tell the honourable gentleman this: I will condemn all atrocities on all human beings, whether Hindu, Muslim or of any other faith, and I am least concerned of whether Khan or Narendra Modi or anyone else benefits from it. If this gentleman lacks human feelings, that is his problem, not mine.

The second email I mentioned was from a female Kashmiri Pandit. Evidently she is a strong supporter of Modi (like most NRIs in the US and almost all Kashmiri Pandits, both in India and abroad). I may invite her attention to my article ‘All the perfumes of Arabia‘, published a few years ago in The Hindu. In this article, I have given strong proof that Modi was behind the massacre of about 2,000 Muslims in Gujarat in 2002, and this is further corroborated by the statement of Lt Gen Zameeruddin Shah, who said his army unit was kept at Ahmedabad airport for three days and not allowed to enter the city when the massacre was going on. It is also corroborated by the affidavit of Sanjiv Bhat, the brave police officer, given in the Supreme Court (for which he is suffering in jail).

I may also invite her attention to the lynchings of Muslims and other atrocities on them since 2014, when Modi came to power. Evidently, since the victims are Muslims, she is not bothered, like most Kashmiri Pandits.

The lady seems upset because I described the 50,000 NRIs present at the ‘Howdy, Modi’ function in Houston as buffoons. But ma’am, please tell me, how else should I describe them, when Modi bragged in his speech, “Everything is fine in India” (a statement he repeated in several languages) although everyone knows that this is a brazen lie? The economy has tanked, with GDP slipping down to 5%, auto sector, IT, power, real estate etc. in the dumps, unemployment rising to record heights in 45 years (as admitted by the National Sample Survey), a large number of Indian child malnourished (as recorded by Global Hunger Index, UNICEF etc.), 50% of our women anaemic, over 300,000 farmers suicides (and the trend continuing unabated ), an almost total lack of proper healthcare and good education for our masses, onion prices skyrocketing, atrocities on minorities and Dalits continuing, etc.

When Modi made this astoundingly mendacious statement, not one of these 50,000 NRIs, whom the lady calls her friends, had the moral courage to stand up and say, “Mr Prime Minister, what you are saying is just not true. Nothing is fine in India.”

Dear ma’am, you and your NRI friends may shamelessly carry on supporting Modi and the Bharatiya Janata Party, but I regret I cannot join your ranks.