The Maratha Reservation Conundrum Will Open a Pandora's Box. Here's Why

The Constitution has no provisions for reservations beyond a limit but that hasn’t stopped politicians from making cavalier statements. Maharashtra is presently in a volatile state. The state-wide agitation for Maratha reservation is spreading like wildfire and is both unpredictable and frightening. It is completely leaderless. No one knows whom to talk to, to resolve the impasse.

The Maratha Kranti Morcha has organised 58 massive silent rallies throughout the state over two years. There is a legitimate grievance that no action has been taken by the state government so far. Now, jail bharo and other agitations are on all over the state. There has also been considerable violence and large scale destruction of public and private property. A number of suicides by agitators has raised serious concerns.

Leaders of all political parties have supported the demands of Marathas and have stressed that these ought to have been conceded right away. Chief minister Devendra Fadnavis being a Brahmin, is under attack, though he has announced more than once that the demand of 16% reservation for Marathas is reasonable and it is only a matter of time before formal orders are issued.

His minister, Pankaja Munde, went to the extent of saying that if she was made the chief minister she would sign the relevant file the day it is put in front of her!  A former chief minister of Maharashtra, Narayan Rane, who has joined the BJP, in an interview on television asserted that there were no constitutional difficulties and as soon as the report of the National Commission for Backward Classes is received, a special session of the legislature can be called and further action taken to announce the reservation. Fadnavis himself has stated that irrespective of the recommendations of the Commission, as soon as the report is received, the state government will take steps to announce the reservation.

But the question is whether an important and complex public policy issue should have been handled in such a casual, and cavalier manner. 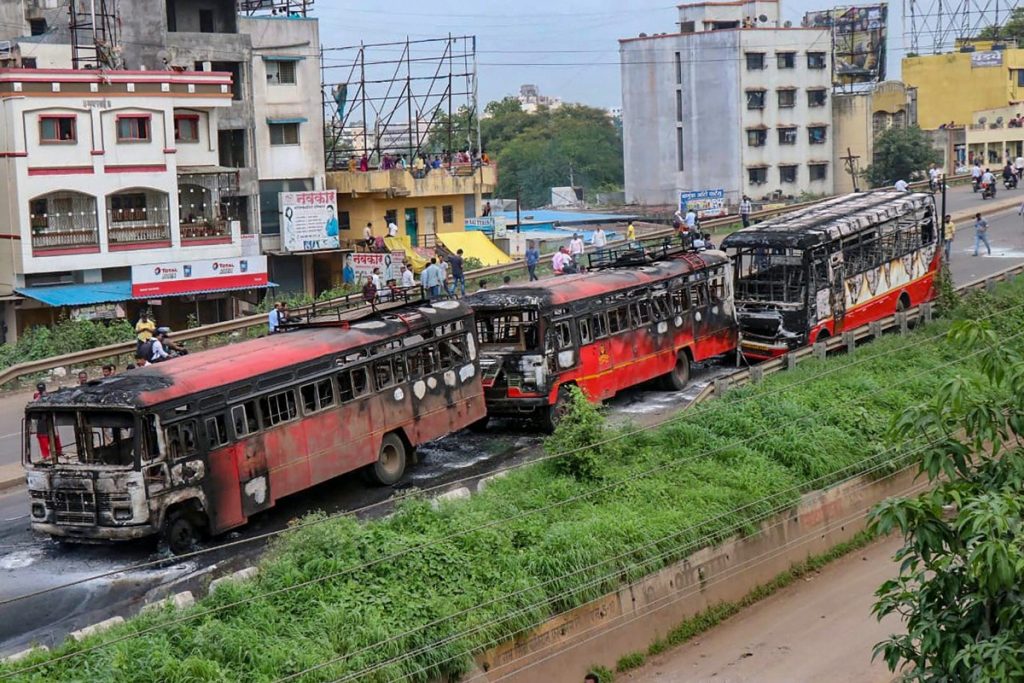 Buses being burnt in the protests. Credit: PTI

What the Constitution says

The Constitution of India contains specific provisions for dealing with welfare of scheduled castes (SCs), scheduled tribes (STs), and the backward classes. Article 46 of the directive principles of state policy casts an obligation on the state to promote, with special care the educational and economic interests of the weaker sections. Also important are the provisions in the fundamental rights. Article 14 states that “The State shall not deny to any person equality before the law or the equal protection of the laws within the territory of India.” Article 15 prohibits discrimination on grounds of religion, race, caste, sex or place of birth.

Sub-section 4 thereof clarifies that the State can make any special provision for the advancement of any “socially and educationally backward classes of citizens” apart from SCs and STs. Article 16 also must not be lost sight of. It states that there shall be equality of opportunity for all citizens in matters relating to employment or appointment to any office under the state. Clause 4 of this article enables the state to make any provision for the reservation of appointments or posts in favour of any backward class of citizens which, in the opinion of the state, is not adequately represented in the services under the state.

By the Constitution (77th Amendment ) Act, 1995, this enabling provision has also been extended to making reservation in matters of promotion. Reference must also be made to article 335 which, inter alia, lays down that claims of SCs and STs shall be taken into consideration, “consistently with the maintenance of efficiency of administration.”

Thus, the whole scheme of the Constitution is to maintain a fine balance between the various competing interests in society. It also mandates that various provisions of the Constitution must be borne in mind. Thus the Supreme Court has held that the element of efficiency of administration is a limit on article 16 (4). As a result, so far, reservation in excess of 50% has been regarded as discriminatory. The only exception has been the case of Tamil Nadu in which reservation of 69% has been sanctified by Parliament through the Constitution (Seventy-sixth Amendment) Act, 1994.

When this large reservation was struck down by the Madras high court and the Supreme Court passed an interim order reiterating that reservation should not exceed 50% in the matter of admission to educational institutions, the Tamil Nadu Assembly, in a special session held on November 9, 1993, unanimously resolved to call upon the Union government to take steps to amend the Constitution. An all party meeting called by the central government endorsed the proposal. As was to be expected, the Constitution amendment bill was passed the day of its introduction in both Rajya Sabha and the Lok Sabha.  The Tamil Nadu Act was also included in the Ninth Schedule to ensure its protection from judicial challenge.

The situation was, however, quite different in the early years after the adoption of the Constitution. Jawaharlal Nehru, as prime minister, was very firm that administrative efficiency should not be permitted to be compromised. While considering the Appleby Report, the Union cabinet had, inter alia, directed that greater emphasis should be placed on merit as a criterion for promotion in order to encourage really competent persons and seniority should only be a secondary consideration. In his letter to chief ministers dated May 18, 1952, Nehru had written:

I have pointed out repeatedly to our army people  and to others that while we should honour seniority, merit must be the most important criterion in every high appointment.

It is often suggested that an alternate criteria of economic backwardness may be adopted to get over the controversies pertaining to caste reservations. However, the Constitution permits reservations only for SCs, STs (which, because of historical injustices and deprivations fall in a special category) and socially and educationally backward classes of citizens. The case of any sections, other than SCs and STs, has to be justified on the basis of their social and economic backwardness.

It was therefore wrong on the part of the chief minister and other politicians to say that irrespective of what the Commission for Backward Classes says, the decision on reservations for Maratha will be announced as soon as the report is received. Recent data show that Marathas have a 14% share in state government employment. Any decision on reservation is bound to be challenged in the high court and the Supreme Court and the courts will deeply examine the question – whether there is quantifiable data showing social and educational backwardness of the community.

The Shiv Sena and some other parties are advocating that all demands for reservations should be considered and settled at the same time. At present, such demands are mainly from Marathas, Muslims and Dhangars. There may be some others as well. Presently, there are 52% reservations in Maharashtra. To this will have to be added 16% for Marathas, and 5% for Muslims, which was announced earlier but has been stayed by the court. All available studies bring out the social and educational backwardness of the Muslims. Even if Dhangars are given a nominal reservation of 2%, the grand total will work out to 75%. This will be even in excess of Tamil Nadu’s highly questionable example. The remedy of including the legislation in the Ninth Schedule will also not be easy any longer after the Supreme Court decision in 2007 mandating close scrutiny by the court of each such new entry in the Ninth Schedule. One of the tests laid down is whether the concerned law violates any fundamental right. Any legislation prescribing more than 50% reservation will certainly not satisfy this test and cannot be included in the Ninth Schedule.

Maratha reservation is a Pandora’s box. Once it is opened, India will have to be ready to face a number of unpalatable, unsavoury questions, not just in Maharashtra but all over the country. At least four dominant castes – Gujjars, Patidars, Jats and Marathas – are insisting on reservations. The ensuing caste wars will raise existential questions for India which is already faced with drummed up opposition to the National Register for Citizens in Assam, the spectre of Lynchistan that India has become and the perceptibly widening communal divide. Is India ready for it?

Madhav Godbole is a former home secretary and secretary, justice, government of India.