“Raise your hand if  you believe that the housekeeping staff, like all of us, have the right to choose to wear what they want to and not feel any different from us. If you feel they should not be forced to wear these obnoxious uniforms, despite having confided in over five of us women staff that they dislike wearing them and us having shared this concern with the senior management weeks ago,” I asked a room full of staff across grades at Amnesty International India’s staff meeting on August 1.

Apart from the senior management which decided to politely force these on the housekeeping staff who mostly come from a certain economic backgrounds different from their own, 90% of those present, agreed with me. Nonethess, the HR head decided to go ahead with this ‘practice for the next six months at least’. Is it fair for an upper caste, upper class man to decide what marginalised women will or will not wear at an organisation which works with and for the upliftment of human rights of the most disadvantaged? I think not.

This is one of the many instances that led me to submit my resignation from what is considered one of the world’s largest human rights organisation, Amnesty International, earlier last week. When I had joined Amnesty International India as a consultant in 2016, working remotely from Delhi for a report on the gang-rape survivors of the Muzaffarnagar riots, little did I know that I would be resigning within eight months of joining as permanent staffer.

I had stepped into a space where the understanding of senior managers about issues of marginalisation and discrimination and on ground community engagement with the most disenfranchised was limited and their behaviour towards staff coming from diverse backgrounds such as mine was averse. Unemployed now, as I write this, my only regret is not being braver and resigning earlier. In my resignation letter I wrote:

I feel discriminated, humiliated, excluded and denied opportunities, unfairly. Being a Human Rights Activist, who has experience of working on field, on advocacy, with communities as well as other actors, I refuse being subjected to this behaviour and will not allow being judged based on biases and misinformation.

In my opinion, the management at Amnesty India, mostly staffed individuals of a higher caste and class background, is in contrast to the values of Amnesty International as an institution. I have plenty of instances to share, with documented proof and witnesses, to substantiate most of which I am going to recount below. The last few months, a year-and-a-half really, have been a terrifying experience for Muslim and Dalit employees, especially women, at Amnesty, who have filed workplace harassment and discrimination complaints and complaints of caste-based discrimination against individuals at very senior levels, formally and informally (Almost of the concerns raised in these complaints have been said to not be discriminatory in nature at the first stage of the enquiry, by committees formed By AII, usually comprising two HR representatives and no externals or specialists).

A very senior Dalit activist from Kerala, who led the gender-based violence theme at Amnesty India for two years and was my manager for three months when I joined the team, before resigning in March 2018, in a letter before submitting her resignation, said that it was often “mental harassment and torture,” which she feels are tools used by the Program Management Unit comprising members of senior management to remove her from the organisation.

She went on to say that this behaviour can easily be understood to come under the definition of discrimination according to the PoA Act. I was witness to her resignation soon after and its acceptance by her manager within half an hour.

In August 2018, one of my team members, a 60-year-old celebrated activist from Karnataka left the organisation for good, in tears, when her contract was not renewed on earlier verbally agreed upon financial terms, because some at the senior levels felt that she was not skilled enough. “It is okay. My English is not Amnesty English and I am not elite like them. It’s not about the 5,000 less that they say now they will pay me. It’s about my dignity,” she said to the four of us trying to console her on her sudden last day at work. She has over 25 years of work experience and in my limited knowledge and understanding of skills and personality, would have been an asset to any organisation. Her replacement, with a much higher compensation for a consultancy assignment – is someone with better English skills I understand.

Another Dalit colleague of mine, who is one of the founders of BAPSA and has a doctorate from JNU, has been subjected to continuous harassment and discrimination. In her complaint of having suffered “caste-based discrimination” at the hands of a director at Amnesty India, she told me she wrote, inter alia, how she once replied to a colleague’s suggestion that an Adivasi activist be taken for work on Adivasi rights, that, “we do not have to hire an Adivasi to work on Adivasi rights just like we do not have to take an animal to work on animal rights”. My friend’s complaint of caste-based discrimination and first appeal (After the enquiry result said it was not caste-based) both have been turned down by those in position of power at the organisation. She has written to the executive director appealing again.

Amnesty India was quick to release a statement welcoming Chandrashekhar Azad’s release earlier this month, but little is known to the outside world or to Azad himself, why he, as the Dalit leader of Bhim Army was chosen by the organisation’s management to campaign for. 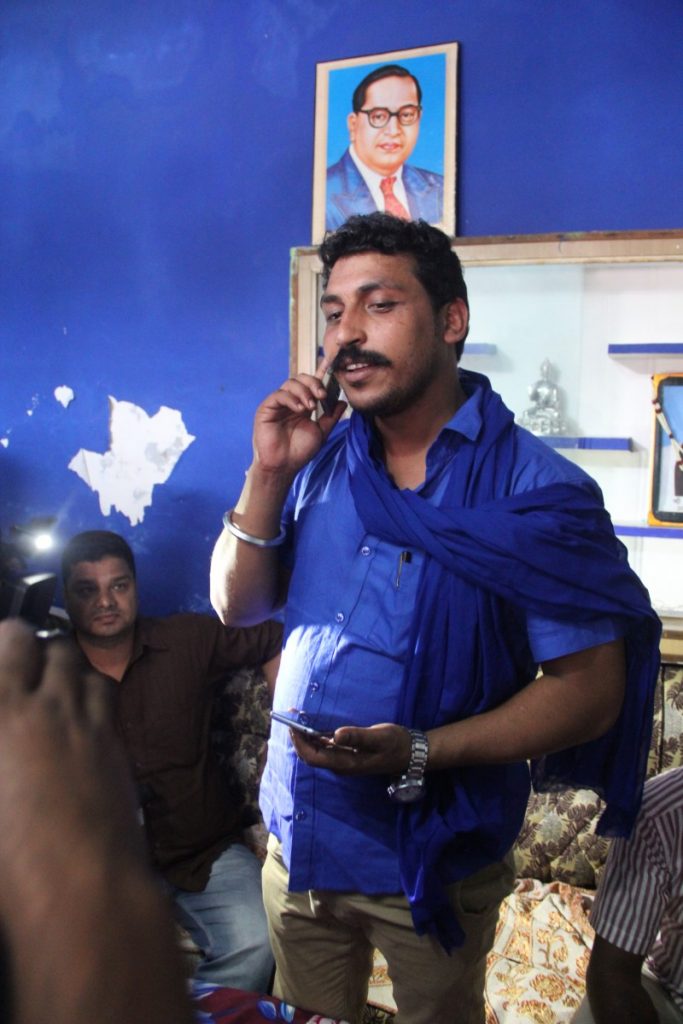 AI India has been given a target by the international office of 7,00,000 plus new members to be achieved by the end of 2018. Given that Amnesty is a membership based organisation that uses campaign as a method to further human rights and support for human rights, membership should mean actually making people a part of the movement.

From the day I joined Amnesty, the only discussion any campaign impact meeting had was how many missed calls or sign-ups were achieved to meet the ‘target set by the international secretariat’. The campaign for him was chosen because of its ‘mobilisation potential’ (how many sign ups it will achieve). Members of Bhim Army, who thought Amnesty India’s management believes in the rights of the marginalised, took it upon themselves to ensure that they made those calls and AI received 1,60,000 missed calls in a matter of weeks. This happened over three months ago.

One must ask the organisation what it did apart from making sure it quoted this number in every possible ‘growth and mobilisation’ presentation at meetings. Or, for that matter, what was done with the 7,00,000 missed calls received for its Rohingya campaign last year or the missed call asked for the Sikh massacre campaign this year, a campaign which was closed in 2017, but restarted for its ‘mobilisation potential’ (meeting the number target).  The assumption is that the missed calls and sign-ups would lead to something like pressuring the government to take an action, but apart from submitting a letter to the ministry, nothing much was done.

The organisation at large and the executive director in particular allowed the director (with an ongoing caste-based discrimination case filed by a Dalit employee against her) to address an Amnesty press conference for Azad, and on one occasion the executive director proudly posted pictures on his Twitter handle accompanied by her, despite being well aware of the fact that she has an ongoing case of caste-based discrimination against her. Yet she represented Amnesty India and ironically addressed the issue of discrimination and marginalisation faced by the community.

Dr. Sylvia Karpagam, a public health doctor and researcher who worked for a period of six months at Amnesty India office and resigned because of organisational resistance to addressing caste writes in one of her articles that “While staff of Amnesty are happy to post selfies of themselves enticingly labelled as ‘Me with a tribal woman’ they are equally ready to label anyone raising an issue about caste as a ‘bahujan bajrang dal'”. They see no conflict in how they use communities from their own privileged locations while simultaneously insulting, humiliating and minimalising their concerns.

That Amnesty India’s management has little knowledge of how to treat women from marginalised communities serving at a certain grade is evident from the fact that an IC member who happens to currently lead the women’s right theme had the gumption of telling my Dalit colleague who was also facing sexual harassment, in a one-to-one conversation on her experience of workplace harassment, “Meri aunty ne mujhe ek baar kaha tha, Taali ek haath se nahi bajti.”  My colleague was crying after the conversation.

There is impunity, and then there is unending, unphased and unchallenged impunity enjoyed by the senior management at Amnesty India.

I am not at all negating some other strands of work that the organisation has done or is doing which may have created an impact. In fact, it must continue to work on issues of importance. Documentation of hate crimes against Dalits and other marginalised groups is imperative, but to take actual steps addressing it is equally so. Merely issuing tweets and statements when something as serious as a rape occurs makes a human rights organisation no different from a media house. One questions intentions when there is greater discussion on how many media houses then picked up the quote issued, instead of engagement with the issue on the ground. I have been guilty of this tweet business myself to prove my performance and worth at the organisation. In meetings, only media pick ups seem to be discussed-on ground engagement is minimal if at all.

There is acute underrepresentation of the marginalised in the higher pay grades. The representation of Muslims at decision making positions, is almost zero – not even one at the board level, none at the senior Management level (SMT) or Program Manager level (MMT), just one at the senior campaigner level (In Kashmir, as it happens) and no campaigner either. The executive director’s writes articles on how much he cares for Muslims and Dalits in India but him not caring to include those of us from those same backgrounds in discussions and meetings is telling. Taking the microphone away from us does not mean you are helping us. It just means your voice is heard, not ours

I stand firm with Amnesty International’ s values but against the values of the upper class, upper caste management of Amnesty International India. A core precept of this value is to ‘take injustice personally’. I may not have a job as I write this, but my resignation has kept my dignity and belief in human rights for all, intact.