Stan Swamy and the adivasis he supports in an impossible battle for their own ancestral lands are pawns pitted against mammoth mining companies. Falsely branding activists as Maoists is the easiest way to condemn to enable vested interests to finish them off.

A file photo of human rights activist Stan Swamy. The meeting comes almost a week after a US-based digital forensics report found that incriminating evidence was 'planted' on the laptop of activist Stan Swamy, who was named an accused in the Elgar Parishad case and who passed away last year in prison. Photo: PTI

“No, it’s not possible,” were my first thoughts when I heard that Father Stan Swamy, an 83-year-old Jesuit priest and activist had been arrested – for the second time. His crime? He defended the rights of adivasis being exploited in their homeland Jharkhand.

Father Swamy has been accused of having links to a Maoist plot connected to the Bhima Koregaon case and was arrested by the National Investigation Agency on Thursday night. The rights activist is one of the gentlest and kindest men I have ever met. So the entire premise – for anyone who knows him – is entirely ludicrous. Funny even, if it were not so tragic. He has Parkinson’s disease. His hand shakes when he raises a cup of tea to his lips. He speaks so softly, you have to strain to hear him.

He assures his interrogators that he has no connection with Maoists. He believes in peaceful, non-violent protest. I believe him. Because I know that his integrity is above reproach.

I heard of Father Stan Swamy in the early seventies, because he was among the first people I knew who advocated living with the adivasi community in Jharkhand to understand their lives and their problems; to help find solutions and a way forward. I went there in the early seventies while still in college to write a story for our student magazine.

“Gandhiji’s non violence was not merely moral or religious. It was strategic. Gandhi was a brilliant general. Oxymoronic though that sounds. He understood that the fight for freedom could not be won by violence because mere ordinary Indians, even if they poured out on the streets with justice on their side, with God on their side, could never win. Even if there were thousands or lakhs of people marching in protest, they could never match the might of the state. Before 1947, the British could bring out the artillery and finish us off. One wrong step could have changed the course of our history. But the entire world watched India’s non violent battle for independence, open mouthed. Non violence was a new word, a new tactic, made in India. The world sympathised and empathised. Gandhi’s strategic non violence was the most brilliant weapon in our war for Independence’ 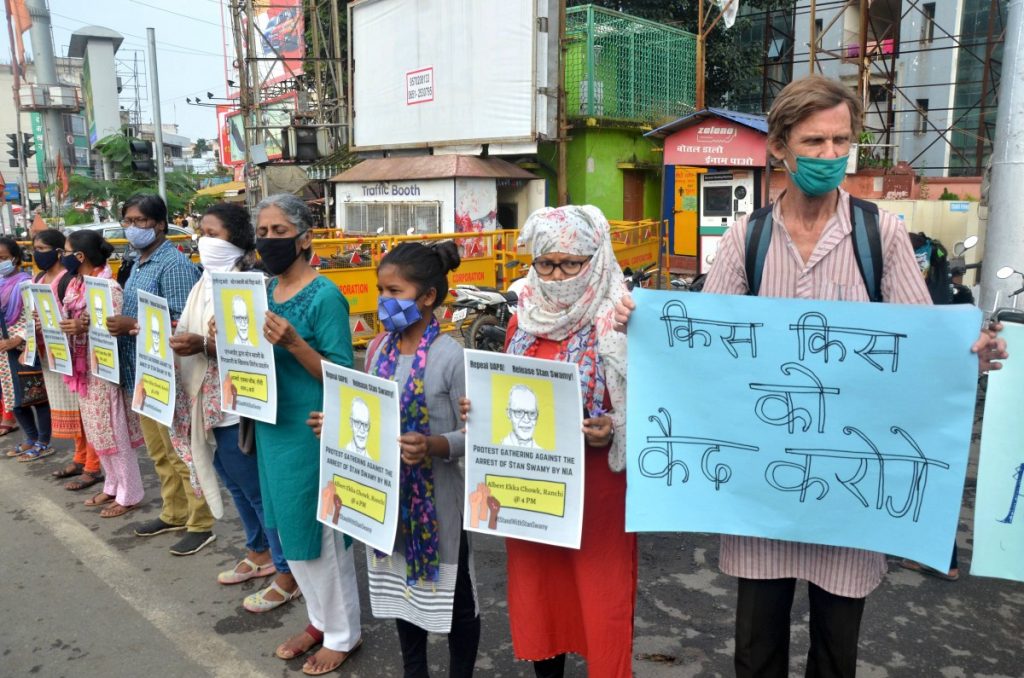 Social activists hold a protest after the arrest of Father Stan Swamy by the NIA in the Bhima Koregaon case, in Ranchi, October 9, 2020. Photo: PTI

The same scenario is playing out today. And the average activist understands that putting ordinary villagers, adivasis, Dalits or women in the line of fire is counterproductive and unfair. We learnt this strategy from Gandhi and Jayaprakash Narayan.

In recent times, it has become the norm to equate the word activist with ‘anti-national’. But who is an activist? What do they do?

It’s quite simple. All over India, there are thousands of people who took up the cause of fighting for social justice for the poor, the marginalised and the voiceless. These people were inspired by the brightest and best minds in our country – from Gandhiji to Vinobha Bhave to JP.

Post Independence, when the battle for freedom was won, Gandhi urged his followers to go out and continue the fight for freedom. This time, it was to free the poorest from hunger and poverty, to teach and educate, to weave and spin, to spread harmony and peace. Thousands rallied to his call and Gandhi ashrams were filled with people determined to continue the freedom struggle on a new battlefield – India’s villages.

The sixties saw the rise of the Dalit movement. New leaders emerged. Gandhi raised the question of untouchability in the early days of the Independence movement, but his ‘Harijan’ epithet was subsequently dismissed  by Dalits as patronising. Dalit power became a clarion call, drawing inspiration from the African-American Black Panther movement. Dr B.R. Ambedkar showed the way.

The term activist gained popularity during the JP movement and during the fight against the Emergency in the mid seventies. After the Emergency, thousands of young patriots, drawing their inspiration from JPs charisma, accepted his challenge to go out and organise the poor, the under privileged and the vulnerable; to fight for their rights. This period saw a proliferation of human rights defenders, though the term was not used till later.

Women and men dedicated their lives to fighting for Dalit rights, adivasi rights, womens’ rights, farmers’ unions and fisherfolk movements. These activists evolved in their understanding of rights based movements. They often lived with the communities they worked with. They identified with the people and though many were middle class, they tried to live simpler lives than their parents, than the backgrounds and privileged upbringing they had been born into. They were pleased to be branded activists and wore the badge with pride.

From the fifties and sixties, when Gandhians prevailed, we moved into the seventies where a sea change took place. Global thinking wafted across the world to India. The 1968 student movement in France, Latin American thinking, Marxist ideology – all these gained ground and influenced grass roots workers. The focus changed from the passive Gandhian way – the giving of food, clothes, free education and medicine to changing unjust situations at the base. ’Daan’ or mere giving was now passe.  Activists were trained to encourage people to ask who was cheating them and why? So if people were encroaching on adivasi or Dalit land, it was time to establish basic human rights; time to equip people to defend themselves, to fight injustice – non-violently, the Gandhian way, and the strategic way.

Soon, womens’ groups began to take action against dowry deaths and acid attacks, and took to the streets and courts to protest and demand justice. Dalit groups found lawyers willing to fight caste atrocity cases in court. Adivasis had activists urging them to defend their ancestral millennia old homelands from dominant caste landlords who shamelessly cheated them and usurped their lands. Environmentalists and eco-warriors hugged trees and stopped forests from being denuded. A huge green movement began. The protest movements grew from strength to strength.

In reality, these people are defending human rights and saving the Earth for future generations. When it comes to central India and defending tribal land from powerful mining companies, the battle assumes David versus Goliath proportions.

Stan Swamy and the adivasis he supports in an impossible battle for their own ancestral lands are tiny pawns pitted against mammoth mining companies. Falsely branding activists as Maoists is the easiest way to condemn them and to enable vested interests to finish them off.

The frail 83-year-old has trumped up charges levelled against him. Yet he has a core of steel, an indomitable strength that comes with moral conviction and a commitment to truth and to the powerless. As they took him to prison, Stan Swamy announced he would begin a fast. His fellow Jesuits who rushed to the prison with his medicines, say he has refused even a sip of water.

I kept asking why, they would arrest this gentle, kind man. Father Cedric Prakash, who is also a Jesuit and activist, said in a TV interview, “It’s to create a fear psychosis. If they can imprison an 83-year-old who has spent his life committed to the poor, who is safe?”

Asianet phoned to interview my husband Stan. People cautioned him, “You will draw attention to yourself. It can boomerang and have repercussions on your work in the Nilgiris.”

Our arrival here in 1986 started with protecting adivasi land from bullies and encroachers. Friends – good people – joined to provide health and education. If this invites the wrath of the powers that be, like Stan Swamy, we can only say, “So be it.”

Mari Marcel Thekaekara is an independent writer, who has focused on social issues in magazines and newspapers which include the Hindu, Statesman, Times of India, Indian Express, Frontline, Economic and Political Weekly, Outlook magazine, Hindustan Times, Seminar, Infochange (an online resource base that provides news on crucial issues of sustainable development and social justice in India and South Asia), and the New Internationalist and Guardian in the UK.