The Eviction in Ranchi That No One Is Talking About

On December 28, 2022, nearly 40 families were rendered homeless after the demolition of their basti in Ranchi by the Railways. 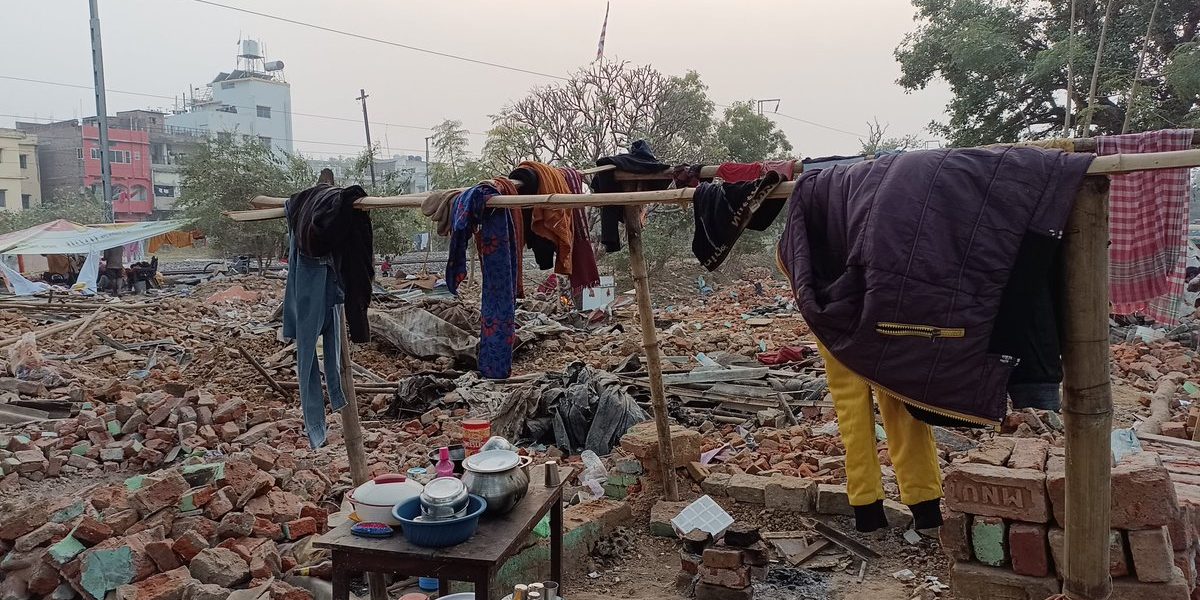 Evicted families are being forced to live in the open. Photo: Twitter/@JharkhandJanad1

New Delhi: On Thursday (January 5), providing relief to 4,000 families living on what the Indian Railways claims is its land in Haldwani of Uttarakhand, the Supreme Court of India stayed the orders of the Uttarakhand high court which had allowed a forceful eviction. Passing the stay order, a bench comprising Justices Sanjay Kishan Kaul and Abhay S. Oka asked the state and the Railways to find a “practical solution”.

“People stayed there for so many years. Some rehabilitation has to be given. There are establishments there. How can you say in seven days clear them off?” Justice Kaul asked. Justice Oka observed that people say they have been living in the area for 50 years. They emphasised on finding a solution, rightly terming it a human rights issue.

Exactly a week before the Supreme Court order, on December 28, 2022, nearly 40 families were rendered homeless after the demolition of their basti in Ranchi by the Railways. Since then, most of them are forced to brave the cold under the open sky. According to the Jharkhand Janadhikar Mahasabha, a state-level coalition of people’s organisations, most families belong to Dalit or Adivasi communities. People who have been evicted told members of the Mahasabha during their visit that they have been living there for three generations. “About 50-60 years ago, people who came to Ranchi in search of work settled in this little piece of land next to the railway line. This is the only home many know,” the Mahasabha tweeted.

2. Most families are Dalits or Adivasis. People have lived here since three generations. About 50-60 years ago, people who came to Ranchi in search of work settled in this little piece of land next to the railway line. This is the only home many know. @svaradarajan @bhanwarmegh pic.twitter.com/z0DjQni0iB

A member of the Mahasabha, who visited the families, told The Wire, “Most of the families have ration card, Aadhaar card and voter ID registered on the address from where they have been evicted. Most houses had electricity connection and the municipal corporation had built a water supply tank too.” He also claimed that the families were assured by elected representatives that they will not be evicted, but now these representatives are missing in action.

In fact, the Mahasabha has tweeted a video from last year in which Sanjay Seth, BJP leader and Lok Sabha MP from Ranchi, can be heard saying that at no cost will even a single house be allowed to be demolished. Notably, in the video, Mahua Maji, Rajya Sabha MP belonging to the state ruling party Jharkhand Mukti Morcha (JMM), can be seen sharing the dais with the BJP leader. However, the evicted families allege that no leader, either belonging to the ruling alliance at Centre or in the state, has enquired about them. The continuing cold wave in the state has made their life even more miserable.

Ranchi’s BJP MP gave assurance to people in Oct 2022 that their basti would not be demolished and they would be rehabilitated first. Also seen is the local BJP MLA and leaders of other parties. Easy to play with the lives of poor Adivasis and Dalits? @svaradarajan @bhanwarmegh https://t.co/V4YHf6pmnE pic.twitter.com/lBayZZf9UM

While in the Haldwani case the Supreme Court gave relief to the families after some Congress leaders along with others approached the apex court, in the case of Ranchi eviction, there has been hardly any spotlight on their plight. It is true that the nature and scale of the Haldwani and Ranchi evictions are not the same. But what is at stake in both the cases are the lives of the most marginalised communities, especially in this biting cold of north India. It is in this context that the apex court in the Haldwani case has asked the agencies – both Central as well as in the state – to look into the matter with a human approach. The Supreme Court’s observation and concern is applicable in the Ranchi case as well.

Hence, the government agencies, taking cue from the apex court’s order and observations, should look into the matter with empathy. To begin with, as rightly demanded by the Mahasabha, the affected families should be provided tents, warm clothes and other basic amenities to cope with the cold. Meanwhile, the process of their proper and time bound rehabilitation should be initiated. After all, the families have been paying all the taxes and have all the required documents.

In this regard, the Hemant Soren-led state government has a special responsibility because only on December 28, the day poor Dalits and Adivasis of Ranchi were rendered homeless, he reiterated a during a press conference that he is a leader of people from backward and tribal communities, the poor and the oppressed class, and not of the “punjipati (moneybags)” class.