Tamil Nadu: For Many, Anti-Hindi T-Shirts Represent Anxieties About Jobs and Future

Although the trend has provided much-needed relief for a few small manufacturers, the protest is much more than just anti-Hindi sentiment. 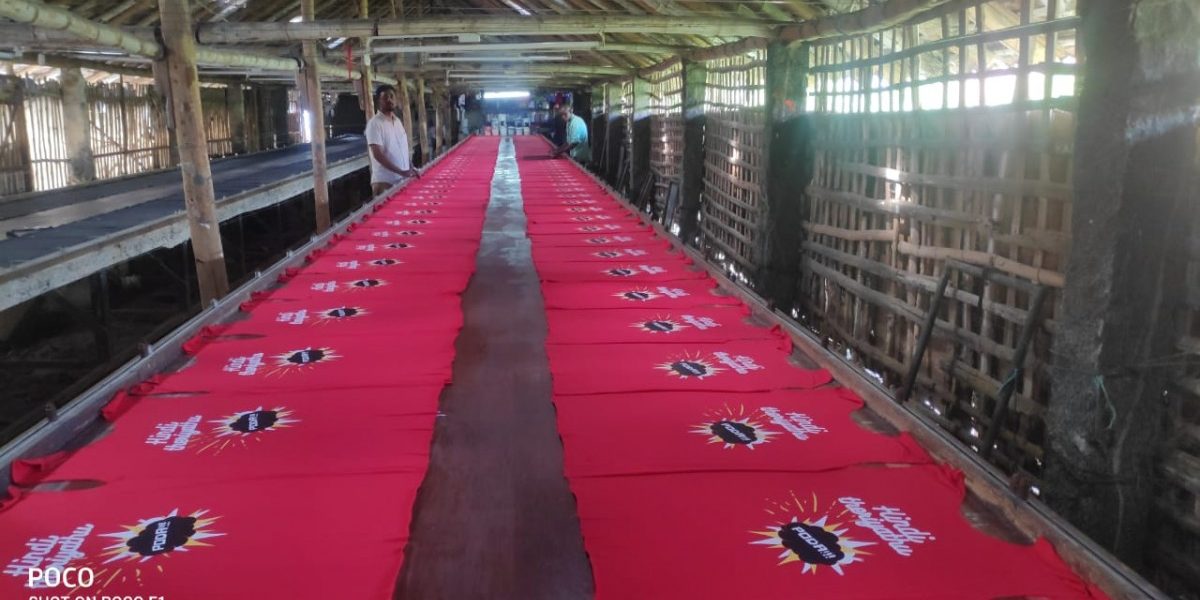 Anti-Hindi T-shirts being printed in Tiruppur. Photo: By arrangement

Chennai: On September 5, acclaimed music director Yuvan Shankar Raja and actor Metro Shirish tweeted a photograph of them wearing T-shirts with slogans opposing the imposition of Hindi. While Yuvan’s T-shirts read ‘I am a Thamizh Pesum Indian’ (I am a Tamil speaking Indian), Shirish’s in red said ‘Hindi Theriyaathu Poda’ (I don’t know Hindi, go away).

The T-shirts were apparently DMK MP Kanimozhi’s idea. In August, the politician was asked by a member of the airport security staff if she was Indian when she told him that she did not speak Hindi.

In less than a week after Raja and Shirish’s photo became viral, tens of thousands of similar T-shirts began selling like hot cakes across Tamil Nadu and even in many countries that have a Tamil population.

For at least a handful of small-time manufacturers in Tiruppur district of Tamil Nadu, the anti-Hindi sentiment meant a viable business opportunity. “I have already delivered 6,000 pieces of these anti-Hindi T-shirts,” says B. Karthikeyan, who runs a small manufacturing unit. One of the earliest manufacturers to print the T-shirts, Karthikeyan says they were the first order he had since March, when the coronavirus-induced lockdown was imposed.

“There are many people manufacturing them now. But personally, for me, this order came as a big relief. I still have 5,000 pieces pending to be delivered, and just today I received an order for 500 more pieces,” he says. 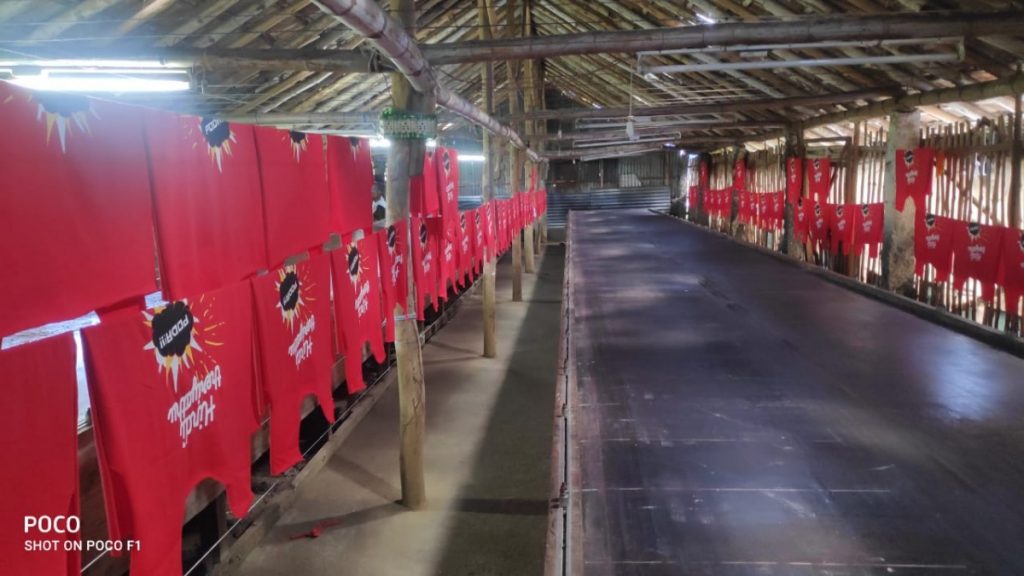 Anti-Hindi T-shirts being printed in Tiruppur. Photo: By arrangement

M. Shekar is a ‘buying agent’ in Tiruppur and he procures the shirts from manufacturers and then sells them. “The idea has benefitted more than 15 small-time manufacturers. On average, a manufacturer has received an order of 5,000 pieces. In a week, the manufacturers made a business worth about Rs 1.5-2 crore. They continue to receive orders from Chennai, Singapore, the US and elsewhere.”

Shekar, who deals largely with orders placed by politicians, says Kanimozhi was involved in designing the T-shirts. “Out of 20 designs, four were finalised. It took about a week. We are happy that the other manufacturers who have started printing the T-shirts have largely stuck to the original idea,” he said.

Rafiq, another Tiruppur based buying agent, says the city has always picked up early on trends. “The T-shirts move very fast and there is a demand. But it’s not just about anti-Hindi T-shirts. Every time a trend appears, it is the manufacturers from Tiruppur who market it. When Rajinikanth’s Kabaali was released, T-shirts with Kabaali’s image on it were manufactured on a large scale,” he says.

On September 6, Kanimozhi shared an image of her with a group of youngsters wearing the T-shirts. “A spark is enough to ignite a sentiment. When we printed Tshirts, in the era of blatant Hindi imposition, we didn’t know that the youngsters would respond passionately like our forefathers in fighting discriminatory practices. Thank you.”

A spark is enough to ignite a sentiment.When we printed Tshirts, in the era of blatant Hindi imposition,we didn’t know that the youngsters would respond passionately like our forefathers in fighting discriminatory practices. Thank you.#ஹிந்தி_தெரியாது_போடா #StopHindiImposition pic.twitter.com/44HHjXuS3d

The spark seems to have spread to the neighbouring states too. On September 13, actor Prakash Raj tweeted a photograph of him wearing a similar T-shirt.

Soon after Kanimozhi tweeted about the discrimination she faced from the CISF officer, national award-winning Tamil director Vetrimaaran also shared a bitter experience. He said in an interview that in 2011, at the Delhi airport, he was made to wait for 45 minutes by an immigration official after revealing that he did not know Hindi. The immigration official had accused ‘Tamils and Kashmiris of breaking the country,’ Vetrimaaran said.

“Not just about anti-Hindi sentiment”

But Aazhi Senthilnathan, president of the Thannatchi Thamizhagam movement (Autonomous Tamil Nadu) thinks the T-shirts represent more than just anti-Hindi sentiment. “I see this movement as the voice of the urban middle-class youth, some of whom might even speak Hindi,” he says.

Senthilnathan recalls his visit to Karnataka three years ago, after a section of the youth and students protested against the decision to use Hindi as the third language on signboards at metro stations. “I could see that many of them [the protesters] spoke Hindi. In the last six years, Hindi has come to symbolise the hegemony of the North, that takes away our jobs and affects our economy,” he said.

He points to anti-Hindi protests in Central government and public sector offices in recent years, which he says is the result of the appointment of a large number of Hindi-speaking officials. “I have known Central government offices where circulars were issued in Hindi and the employees were told that they had to leave if they didn’t know Hindi. There is this feeling that a state as developed as Tamil Nadu continues to be discriminated against, and humiliated by Delhi. This North-South divide is now more acute in the urban middle class,” Senthilnathan says.

Senthilnathan says that in the past, such protests emerged only from the traditional Dravidian parties or Tamil nationalists. “If a cinema personality or an ordinary citizen is so vocal now, I see it as a voice against the hegemony.”

Senthilnathan also points out that anti-Hindi protests did not figure in the priorities of the mainstream political parties for the last two decades. “Of course, they would remember the martyrs of the anti-Hindi protests every year and organise events. But since the 1990s, it was not a priority. If it is coming back now, especially among the commoners, I think it is reflective of the mood of the state and the frustration of the youth,” he says.

“The simmering job insecurity among the youth in Tamil Nadu keeps the language issue alive today.  There is a new reason to protest Hindi imposition since the middle class of Tamil Nadu face an imminent threat of losing their jobs and livelihood. What happened to Kanimozhi and Vetrimaaran was the manifestation of this fear, of this threat that they are facing,” he says.

Interestingly, Senthilnathan says, this is not the first time that clothes have been used to protest against the imposition of Hindi. In the 1950s, a group of Periyarist women wore sarees that had Tamil letters and slogans like ‘Tamizh Vaazhga’ (Long live, Tamil) printed on them to oppose Hindi imposition.  “In the 1950s, Chennai was not as big a city as it is today. The women were picked up by some policemen, who left them somewhere in Poonamalle. It took the women hours to figure their way back.”