Mumbai: With top Congress leaders like Rahul Gandhi and Priyanka Gandhi Vadra hitting the streets to highlight the Uttar Pradesh government’s mishandling of the Hathras gangrape-and-murder case, one would assume that since at least in the states where the party is in power, individuals’ right to protest would be honoured.

But in Maharashtra, particularly in Mumbai, that is not the case. The city police began tracking 24-year-old anti-caste activist Suvarna Salve at 1 am on October 2 and at the crack of dawn, they were at her doorstep armed with a legal notice to prevent her from participating in any protests in the city.

Suvarna, a student and cultural activist, says the police first called her on her cell phone at midnight and inquired about her whereabouts. “They asked me for my address and said they want to serve me a notice at 1 am. I informed them that I was away and they should not bother my family. But at around 7:15 am, the police were at my doorstep with a notice. My family received the notice,” she says.

The notice, typed in Marathi, stated that Salve was prohibited from participating in a “peaceful protest” organised by a Mumbai-based collective ‘Hum Bharat ke Log’ (We the People of India). Issued by the Marine Drive police station and signed by senior police inspector Mrityunjay Hiremath, the notice states:

“In the peaceful protest, banners and placards with messages like “Sab Nirbhay Bano, Loktantra Zinda Rakho, Savidhan ka SanmaaN karo” (Become fearless, keep democracy alive, respect the constitution) are to be displayed near a Gandhi statue at Madam Cama road.” 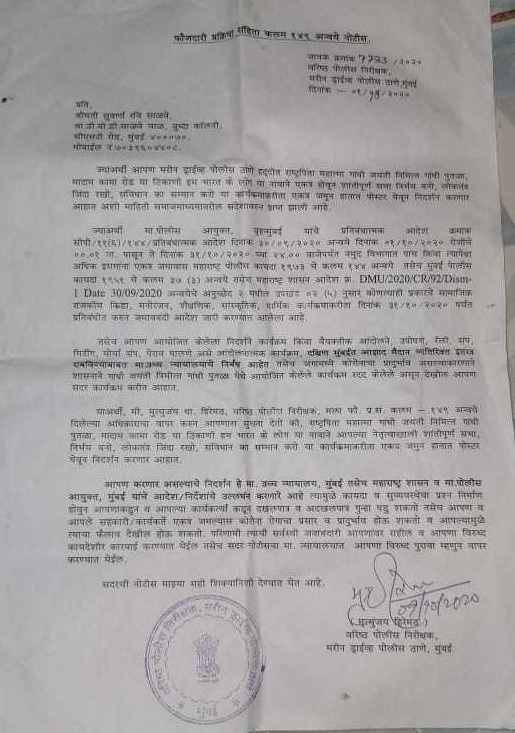 The notice served by the Mumbai Police on Suvarna Salve. Photo: by arrangement

In the notice, issued under section 149 of the Criminal Procedure Code (CrPC), the police have quoted a whole bunch of sections, including those under the Maharashtra Police Act, the Epidemic Diseases Act and other sections of unlawful assembly claiming that during the COVID-19 pandemic, the public gathering is prohibited. Section 149 of the CrPC implies that every police officer may intervene for the purpose of preventing, and shall, to the best of his ability, prevent, the commission of any cognizable offence

Salve says while the sections applied are understandable, the motive behind serving a notice only to her is not. “It was supposed to be a public gathering. Several people had decided to participate. But they identify just a few in the crowd and serve a notice. How to even understand this behaviour,” she asks.

Besides Salve, at least two more persons who were to participate in the protest have been served with similar notices. Salve did not attend the protest and Firoze Mithiborewala, one of the protestors, confirmed that the police served similar notices to two teenagers who had assembled at the protest site.

Interestingly, when The Wire contacted the Marine Drive senior police inspector Hiremath to inquire about the grounds for issuing this notice, he said that he was not aware of it. “There is no protest organised within my jurisdiction. We have not issued any notice,” he claimed over the phone. The letter has his name and signature on it.

This is not the first time that the Mumbai police have served a notice on Salve. On August 29, The Wire, in a detailed piece had reported the Mumbai police’s attempt to classify Salve as a “habitual offender” and initiate the administrative procedure of “externment” against her. In that notice, the Mumbai police also demanded a whopping surety of Rs 50 lakh from her. The notice was served to her for participating in an impromptu protest organised in the city in January in the wake of the attack on students and faculty members inside the Jawaharlal Nehru University (JNU) campus.

Salve says she has been singled out and harassed by the current state dispensation. She says the police’s act of serving notices on her for every public appearance is crafted with a clear intention to profile and criminalise her.

Since her college days, Salve has been a vocal anti-caste voice, participating in protests and students’ agitations across India. In 2016, after the death of Rohith Vemula, a PhD scholar at the University of Hyderabad, which many described as an “institutional murder”, Salve joined the Joint Action Committee (JAC) formed to fight for justice for Vemula and other Bahujan students who face discrimination in campuses.

Salve told The Wire, “The protests that I have participated in have always been peaceful and organised against the atrocities and violations of human rights in the country. This protest [on October 2] was organised to register our protest against the inhuman treatment meted out to a Dalit family, whose 19-year-old daughter was allegedly gang-raped and killed. And the irony is, the Mumbai police identifies one Dalit woman and prohibits her from protesting.”