The actor said his stint as the host of Savdhaan India had ended, just hours after his participation in a rally protesting the Delhi police's violence against students. 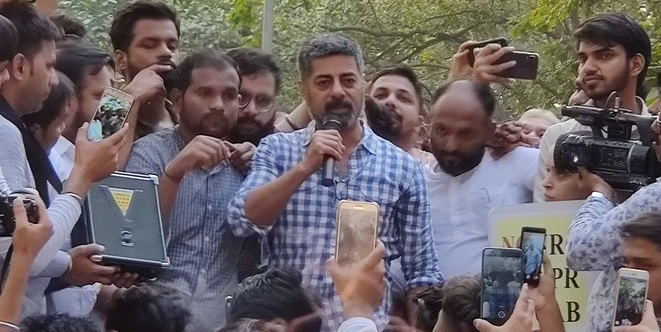 New Delhi: Actor Sushant Singh announced early on Tuesday morning that his contract with Savdhaan India, a Hindi language crime show, had ended. The development came just hours after Singh participated in a protest in Mumbai that condemned police violence against students of Jamia Millia Islamia who were protesting the Citizenship (Amendment) Act (CAA).

And, my stint with Savdhaan India has ended.

Singh hosted the show, which chronicles true crime stories. Responding to a tweet which asked him if the termination was the “price” he paid for speaking the truth, the actor seemed to confirm, saying that it was a “very small price”.

Speaking to the Indian Express, the actor said he sells his talent, not his conscience. “When my kids grow up and ask me what I was doing when students were being tortured, I should have an answer,” he said.

Singh also said that no specific reason was given for his contract being terminated. “… I feel if it was indeed a repercussion to my action, then it is a very small price that I could pay. I am shaken by whatever is happening and do not regret my actions.”

With celebrities coming under criticism for “staying silent”, the actor pointed out that several Bollywood personalities have spoken up about the violence. … there are people like Richa Chadha, Taapsee Pannu, Zeeshan Ayyub and even Anubhav Sinha, who have been vocal about the recent incidents. Jinko galat laga woh bol rahe hai, jinko nahi, woh chup hai.”

The actor also spoke about past incidents of violence against students. Referring to the JNU controversy of 2016, he said doctored videos were circulated to give them the tag of “Tukde Tukde Gang”. “No one apologised to them, and they are still called by the same name. Similarly, the Jamia kids were not involved in any kind of violence, and the police even clarified the same. Even then, we all know what happened with them. It’s so strange that there’s footage of the bus burning but no visual of who lit it? There has been a constant effort to bring down one community and students’ voices. They are our future, and we cannot stay silent over this,” he told the Indian Express.