Supertech Demolition: High-Rises Cleared, But Families Under Flyover Left to Fend for Themselves

These families were reportedly not told to move. Nor were they provided any temporary accommodation, unlike the better-off families who live in gated apartment complexes nearby. 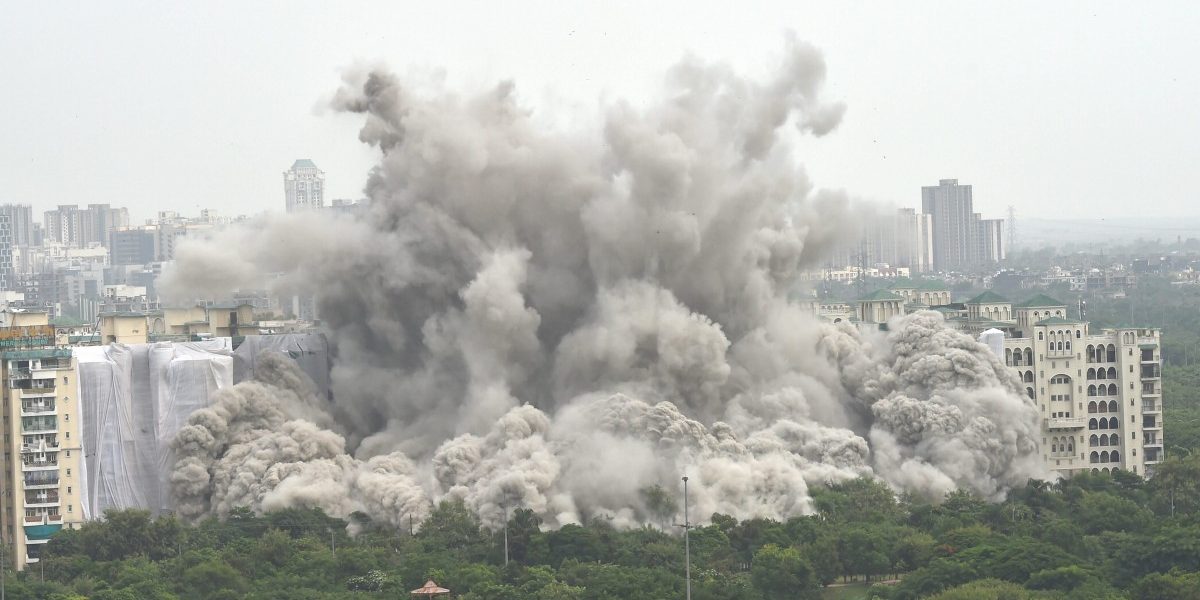 Demolition of Supertechs twin towers in Noida, Sunday, Aug. 28, 2022. Over 3,700 kg explosives were used to bring down the structures in pursuance of a Supreme Court order that found their construction within the Emerald Court society premises in violation of norms. Photo: PTI/Shahbaz Khan

New Delhi: While residents of nearby high-rises were moved away temporarily during the demolition of the Supertech twin towers on Sunday (August 28), the authorities seem to not have shown similar concern towards three families who lives just metres away – under the Jaypee flyover.

According to the Indian Express, these families were not told to move. Nor were they provided any temporary accommodation, unlike the better-off families who live in gated apartment complexes nearby.

“We have been living on the side of the flyover for more than 10-12 years now. I remember when the builders started the Supertech construction. I never cared for the building or the violations. We only found out about the demolition a few days ago. I didn’t know it would happen. Nobody approached us or asked us to move. A few policemen showed up in the morning and asked us to stay on the ground across the road. We don’t mind,” Hansraj, a 50-year-old man who lives under the flyover along with his wife and daughters, told the newspapers.

“Where else will we go? We will just sit on the ground. I prepared meals early in the morning for the family. We will eat our food once the demolition starts,” his wife Lekha added.

A senior officer at the Noida Authority reportedly told the Indian Express that the families were not forgotten; the flyover had been deemed to be safe. The flyover was a safe space for the media to see the demolition. We didn’t forget about anyone or put them in danger. Also, the families were informed days ago about the demolition and health risks. Last night, most of the families moved from their huts and went to some other place. Only a handful were left here. We also didn’t push them as locals flocked to the spot to witness the demolition,” the officer said.

On the other hand, over 5,000 people from Emerald Court and ATS Village societies had been evacuated before the demolition of the twin towers, PTI reported. They were brought back to their homes only on Sunday evening.