After marching 100 km to the district collector's office, the protesting members of the Adivasi community were forced to spend the night out in the cold before their demands were heard by the administration. 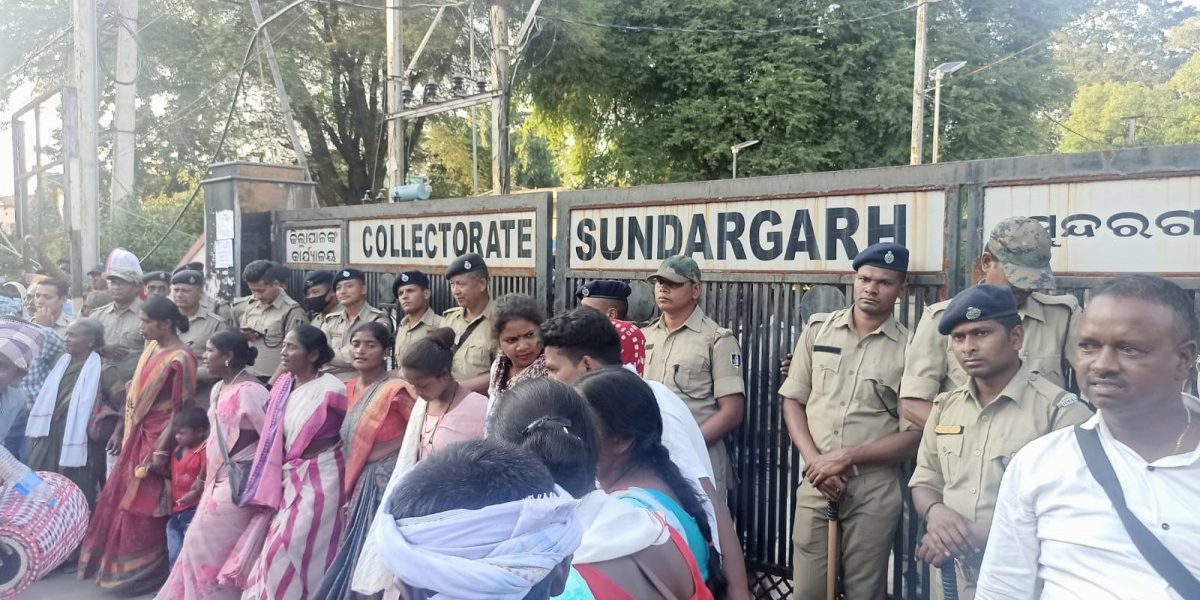 Members of Sundargarh's tribal population protesting outside the office of the district collector. Photo: Special arrangement.

New Delhi: Around 5,000 members of the Adivasi community of Odisha’s Sundargarh district surrounded the office of the district collector on October 21 to protest against what they claimed was the illegal acquisition of their land by the Dalmia Cement Company.

Under the banner of the ‘Jan Sangathan Forum for Gram Sabha’, members of five panchayats from the district – the Kukuda, Alanda, Kesramal and Jhagarpur Panchayats of the Rajgangpur block and the Ketang Panchayat of the Kutra block – came together to demonstrate.

The 5,000 protesting tribals reportedly began a 100 km padyatra (footmarch) from Ramabhal on October 18, reaching the collector’s office on October 21. That night, the protesting Adivasi members spent the night out in the cold, demanding a meeting with the collector. 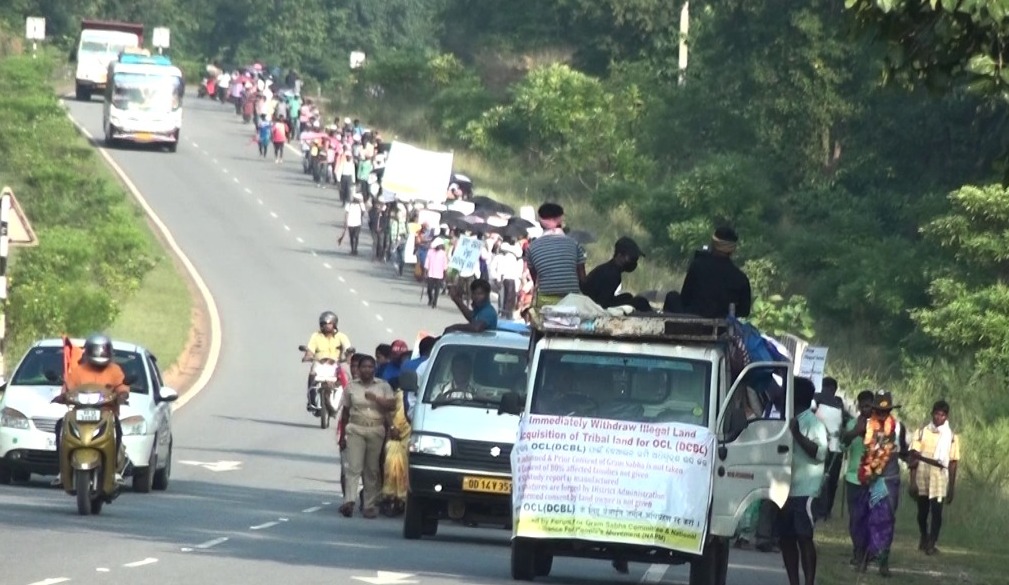 The protesters began their 100 km footmarch from Ramabhal on October 18 and arrived at the collectorate on October 21. Photo: Special arrangement.

The group also released a joint press statement on Monday, October 24, detailing their journey and demands.

In the statement, the group notes that 750 acres of land coming under the aforementioned panchayats have been “illegally allocated to the Dalmia Cement Company” (formerly the Odisha Cement Limited; OCL), despite the members of the Adivasi community rejecting outright the proposal to part with their land.

The statement alleges that if this land deal goes through, 60,000 tribals from 57 villages will be displaced and left unemployed. More importantly, the statement says, they would be left without their identity.

“For us tribals, land is not just a livelihood; it is like a part of our bodies,” the statement quoted the Jan Sangathan Forum for Gram Sabha president, Bibol Tope, as saying. “Land is connected to our life, identity, culture and language. That’s why, in 2017, we started this movement to save our land.”

“We’ll give our lives before giving even half-an-inch of land to the Dalmia company,” Tope said.

Providing a background to this dispute, the statement says that Dalmia-OCL seeks to expand its stone mining operations in the region by providing an additional 2,150 acres of land to Dalmia Bharat, a private company. In order to complete the first leg of this expansion, the statement claims, the company needs 750 acres of land.

The tribals are on their way to the Sundargarh collector’s office to protest against illegal land acquisition by the Dalmia Group. This is a four-day rally to save the land of their ancestors. #SaveSundargarh @Naveen_Odisha pic.twitter.com/1LPeFu1jEB

It notes that when the protesting tribals arrived in front of the collector’s office at 10 am on October 21, they demanded that officials come out of the office, take a memorandum from the protesters and give their assurance that an inquiry would be conducted into the allegations of illegal land acquisition.

However, the statement notes that not a single official came out of the collector’s office. Instead, the tribals were told to select four representatives to give the memorandum to the collector in his office.

Thereafter, as protests intensified at the site, the collector’s office as well as his residence were closed “from all four sides”.

At 7 pm that day, under pressure from the protesters, the collector came out to address the crowd and called 25 representatives to meet with him the next day. With no other arrangements in place, the 5,000 protesters were once again forced to spend the night in the open.

The next day, October 22, the collector met with the 25 delegates of the forum, took notice of the memorandum and provided a written assurance that the memorandum would be sent to the chief minister and governor of Odisha, as well as the President of India, and that the land acquisition process will be halted until a reply is received.

The protesting tribals had also demanded that until the illegal land acquisition is stopped, the protesters be given space outside the collector’s office for 100-200 members to protest, in addition to arrangements for water and mobile toilets. In this regard, too, the collector gave his assurance that arrangements would be made within 10 days.

The district administration’s assurances were then conveyed by the delegates who attended the meeting to the crowd and at 4 pm that day, buses were arranged to take the protesting tribals home safely.

Also read: Over the Last 75 Years, Struggles of India’s Tribal Communities Have Multiplied

Rila Susheela Tope, sarpanch of the Kukuda Panchayat said, “On January 26, 2020, the Forum rejected the proposal for the acquisition of our land and passed a resolution to not part with even an inch of land. However, the state government, the administration and the company, without conducting a social impact assessment, without any evaluation, without any notification and without the permission of the Gram Sabha, began the process of land acquisition.”

“We are Adivasis; we will not leave our land, we will not leave our village and we will not make a deal for our soil,” Vinay Barla, the Forum’s editor, said. “The government has been trying to lure people by promising to pay them Rs 25 lakh and use fake signatures to show their consent; that’s why we launched our four-day foot march. If the government does not heed our demand and stop the illegal land acquisitions, we will intensify our protests”.

Meanwhile, Madhusudan, president of the Jan Jagran Abhiyan said, “In 2018, in the name of the ‘Adopt a Heritage’ programme, the Modi government mortgaged the heritage of both Delhi and the country, the Red Fort, to the very same Dalmia Bharat group. However, when this company came to Sundargarh in Odisha, they were opposed.”

“This is because this movement does not belong to any (political) party or special group,” Madushan continued, “it belongs to the women, youth, students and members of the Adivasi community. We will not give even half an inch of our land. The Dalmia company will have to go back.”

“This is a movement of Adivasi strength and will continue until Dalmia goes away,” Madhusan said, according to the statement.

The statement names Jhagarpur sarpanch Lalit Lakra, Alanda sarpanch Ajit Lakra and committee member Mahima Tope, and other members as those leading the movement, further saying that after two weeks, the movement will begin by establishing a front outside the office of the Sundargarh district collector.