Banks and ATMs are running out of cash, there is a shortage of medicines and grocery stores have limited supplies. 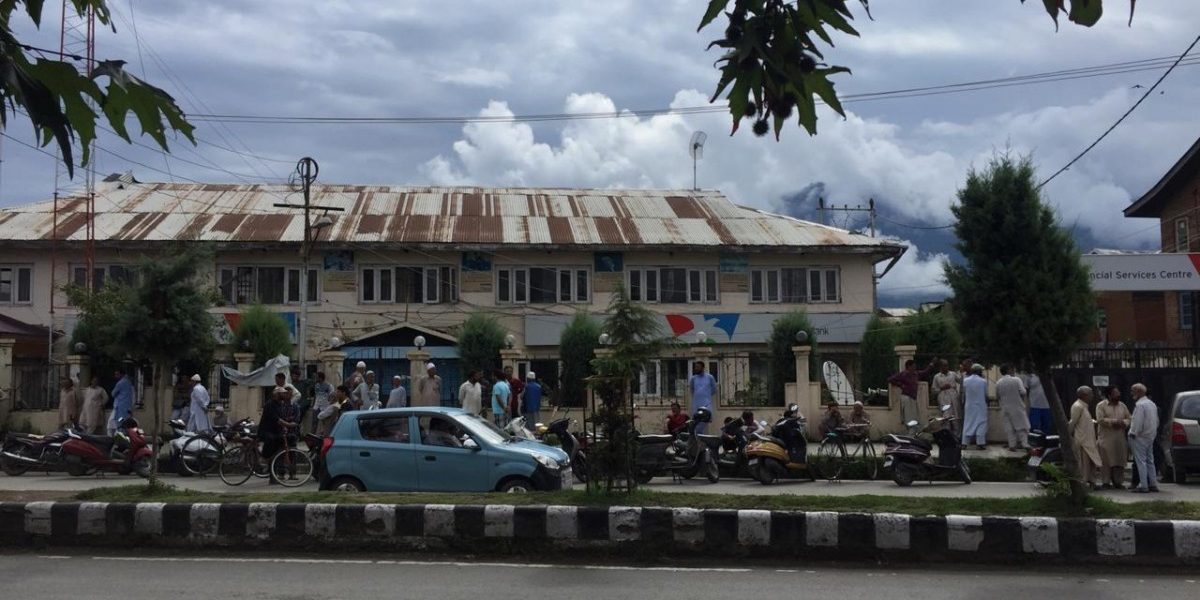 Srinagar: With the unprecedented government clampdown and information blockade in Kashmir entering its second week, banks and ATMs are falling short of cash, local and wholesale markets and chemist shops are running out of supplies, and bakeries, grocery shops and markets for sacrificial sheep are seeing very few buyers on Sunday.

After initially relaxing the strict ‘curfew’ in the run-up to Eid, which falls on Monday, the Jammu and Kashmir police made announcements from inside police vans on Sunday afternoon asking people to stay indoors and not open shops in some parts of Srinagar, as restrictions have been re-imposed.

On Monday, the Narendra Modi-led Bharatiya Janata Party (BJP) government scrapped the special status guaranteed to Jammu and Kashmir under Article 370 of the Indian constitution, and vertically broke the state into two union territories, bringing the region under its direct control.

On the same day, just before dawn, the government imposed a de facto ‘curfew’ and detained most of the top pro-India leaders. Almost all separatist leaders are already behind bars. By the end of the week, the detention orders – many of them informal – have been extended to cover about 500 mid-level leaders and workers of mainstream parties across Kashmir.

All major roads, bridges and alleys in the Valley are being manned by the army, paramilitary forces and the Jammu and Kashmir police. Concertina wire and barricades have been erected at all strategic squares leading into and out of Srinagar’s Downtown.

The usually bustling markets look deserted on the day of Arafat – a day ahead of Eid-ul-Zuha.

Deputy commissioner, Srinagar Shahid Iqbal on Wednesday denied that the government had imposed a curfew in the city and insisted that only restrictions under Section 144 were in place, prohibiting the movement of more than four people together.

Starting early Saturday morning, people were anxiously queuing up outside banks across the city. The administration has said that banks shall remain open for the public.

“I do not have even a single penny left. Eid is approaching and my kids want me to buy them new clothes,” Abdul Ghaffar, a resident of Habak, said outside a branch of the Jammu and Kashmir Bank in Hazratbal.

More than 100 people had been waiting outside the branch from early morning. Even though banks normally open at 10 am, they were not let in even by 11 am, when this reporter visited the branch.

Employees who had reached the branch said they feared opening the front door would invite trouble for them. “We do not have any cash in the bank chest. The people will get angry,” a banker said. “Even the ATMs have run dry.”

Although the administration run by governor Satya Pal Malik announced that the people would be allowed to buy essentials on Eid, many said that in the absence of cash, there was not much they could afford to buy.

Khurshid Ahmad Shah, a resident of the old city, said that even though some people have cash left, even that is of no use.

“The markets have run empty. Groceries and provisions have vanished from the shops. Since there is complete restriction on the movement of people, the shopkeepers are not able to purchase the products from the wholesale markets,” he said.

The emerging situation will probably mean that a majority of residents in the besieged Valley will miss one of the biggest rituals of Islam, the qurbani or sacrifice on Eid.

Soon after the imposition of ‘curfew’, the herds of sacrificial animals vanished from the market.

Although sheep were seen again in some markets and at roadside shops over the past couple of days, those bereft of cash are not in a position to buy the animals.

Ghulam Rasool Roshangar, a sheep vendor in uptown Srinagar, said that he would usually sell 10 truckloads of sheep – approximately 3,000 heads – on Eid.

“We went to the market on August 3 and managed to sell 20 sheep in two days. Since then, we have not sold more than 16.”

Roshangar said he fears that he may not be able to sell even 100 more. “Honestly, I do not expect people to come and buy sheep. People want to save whatever little money they have left with them. We do not know for how long this phase of chaos will continue.”

Local shopkeepers in several areas of the city said that the curfew has pushed everyone to the edge. “I am not able to make it to the market in downtown Srinagar to purchase items for the shop. People who come to our shops find the racks empty,” Shabir Ahmad Bhat, a shopkeeper in Srinagar, said.

Ali Muhammad Wani, a wholesale dealer in the largest spice market of the Valley, Maharaj Gunj, said that he was supposed to receive stocks from New Delhi on Thursday. “But we do not know where the trucker is.”

He said that many shops in the market are empty now.

Although the state administration relaxed restrictions for a few hours on Sunday morning, the barricades were back on the roads around noon and paramilitary forces were seen forcing residents to go back home.

This led to chaos.

People who were on the roads and in markets to buy essentials were virtually caught in “no-man’s land”.

A couple who was asked to go back by a group of paramilitary troopers on Budshah Bridge in the city centre said that they had not ventured out of their home to buy essentials.

“We were on our way to check on our daughter and son-in-law, who live in the uptown area,” they said.

The couple said that despite living just five kilometres away from their daughter, they have not been able to check on her in the past one week.

Another major crisis that is emerging in the Valley is that of medicines.

Abdul Raoof Bhat, a resident of Kathidarwaza, is on life-saving drugs as he recently underwent a kidney transplant.

On Saturday, he said that he has a stock of medicines that will him no more than three more days. “I checked with a number of medicine dealers who are also running short of supplies, and am I not able to contact someone outside the Valley who will send the medicines.”