The police also summoned Fahad Shah, the editor of Kashmir Walla, in connection with a video story and a news item that appeared on the outlet’s Twitter handle.

Srinagar: Two journalists in Srinagar were allegedly manhandled by the Jammu and Kashmir police on Friday when an incident of stone-pelting broke out outside the Jamia Masjid.

The 619-year-old mosque in the city has been a political citadel of Hurriyat leader Mirwaiz Umer Farooq, who was expected to be released from his 19-month long house detention on March 5, before authorities decided against the move, prompting an outcry from his supporters.

Shafat Farooq, a multimedia journalist at BBC Urdu, said doctors at Bone and Joint Hospital Srinagar diagnosed him with a “soft injury” on his back and gave him medication. The Wire has seen a copy of his hospital card confirming the injury. According to Farooq, he was caught on the wrong side of the clashes between police and protesters and was assaulted. “I joined my fellow journalists when the police came towards us and started chasing us,” he said. “While they ran away, I pulled up near a police van near a safer area and that’s when I felt something heavy ramming against my back. It was butt of a gun that a cop was holding. I immediately fled,” he said.

Saqib Majeed, a photojournalist whose work has been featured in several international publications, alleged that a police officer held him violently to point of “choking”. The police, however, strongly denied the claim and said they only intended to stop journalists from entering the premises of the mosque.

“There was already a ruckus inside the mosque because worshippers were probably angry when they realised that Mirwaiz was not arriving,” Majeed said. “Then we heard a commotion and went outside. I put myself on the side of the police. That’s what we always do. When police began chasing the protesters, I also raced down the street leading to the mosque for a better angle. That’s when an officer wrapped an arm around my neck,” he said.

A group of journalists later confronted the police over the assault. The confrontation was filmed and put on social media showing cops engaging in a heated verbal exchange with the reporters and camerapersons.

Farooq said he then returned to editing at the Kashmir Press Club office in Srinagar. “Later, my back began to hurt. My colleagues insisted I visit the hospital where doctors did an X-ray. For a full night, I was in pain but in the morning I began feeling better.”

Both Farooq and Majeed acknowledged that police apologised for the behaviour.

On Saturday, an eerie silence enveloped the area of Nowhatta where the Jamia Masjid is located. Store-owners and rickshaw drivers around the mosque said that they were not present at the scene at the time of clashes. Inside the mosque’s premises, the litter left in the wake of Friday’s clashes was being cleaned. Teenagers and tourists were posing for photographs at the fountain located at the centre of the mosque.

Jamia Masjid rose to prominence as a political-religious pulpit in the late 19th century and the hereditary title of Mirwaiz has been in vogue since 1901 starting with Moulvi Rasul Shah.

Mridu Rai, a professor of history at Presidency University Kolkata, writes that the “The dastarbandi (tying of turban) ceremonies in 1931 of the new Mirwaiz, Maulvi Atiqullah, who succeeded Maulvi Ahmadullah on his death, showed how closely the Anjuman-i-Nusrat-ul-Islam – the office of Mirwaiz and elite Kashmiri Muslims associated with him – founded by Rasul Shah in 1899, had come to be tied to the Dogra maharaja of Kashmir.”

Later in the mid-1960s, Mirwaiz threw in his lot with the Holy Relic Restoration Movement leading the effort under the banner of the Action Committee — a name it continues to use to this day, often interchangeably with the All Party Hurriyat Conference. 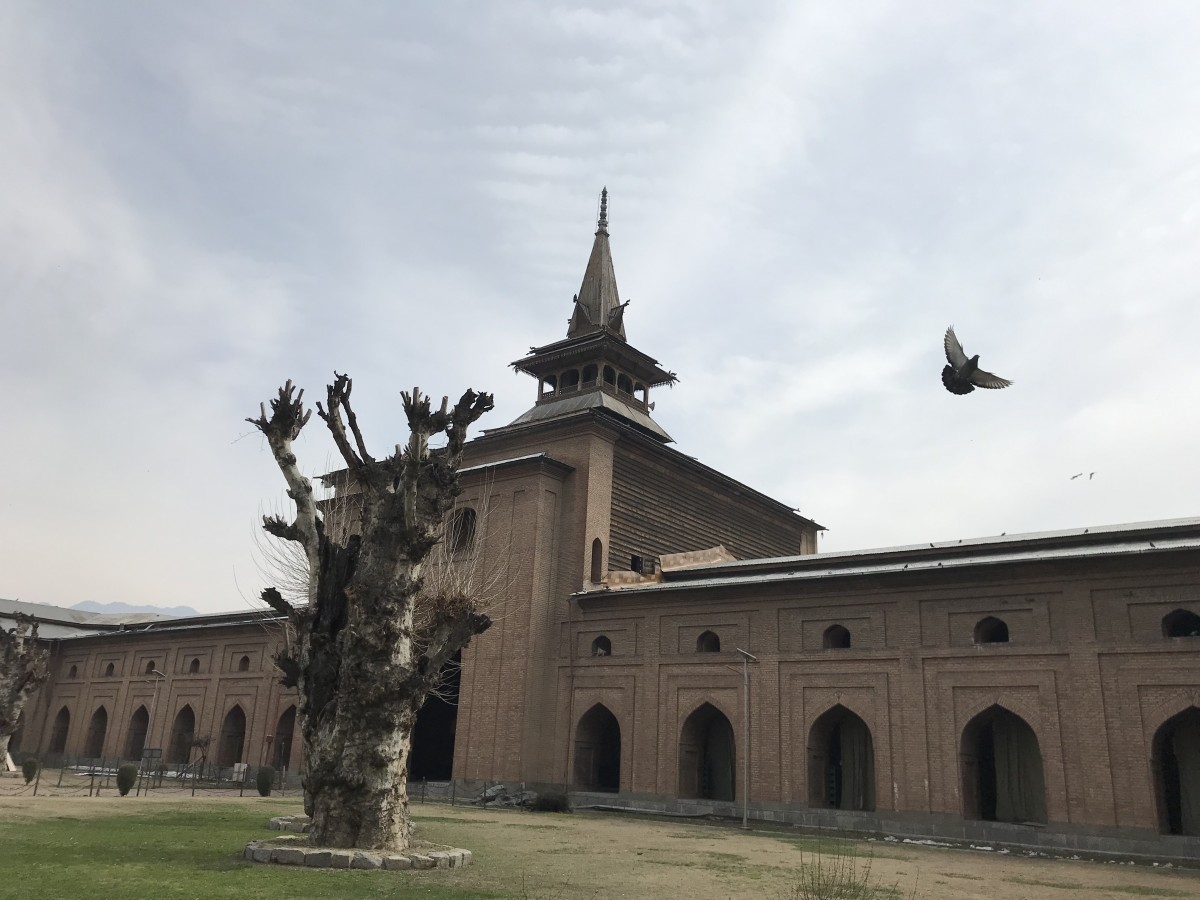 In his first press interview since the scrapping of Article 370, Mirwaiz Umer Farooq said that the police had arrived at his house on Thursday evening to inform him that he was still under detention in spite of reports appearing in the media that the J&K government was expected to end his house arrest. “I am surprised that India’s home minister told parliament that no one was under house arrest in J&K but here I am cooped inside my house from the last 19th months,” he told BBC Urdu.

The announcement of his release was being interpreted as the Indian government’s attempt to relax the political and security stranglehold over the region put in place since August 2019. Recently, India signed two back-to-back peace agreements with China and Pakistan laying down directions to secure a ceasefire along the Line of Control (LoC) and a de-escalation of tensions along the Line of Actual Control (LAC). Speculations also abound that the agreements had been facilitated by third parties including the US and UAE.

The incident has renewed concerns over the decline in press freedom in the erstwhile state, which has been subject to several restrictions that critics believe severely undermine the ability of journalists to report without fear.

The police also summoned Fahad Shah, the editor of Kashmir Walla, an English language weekly in connection with a video story and a news item that appeared on the outlet’s Twitter handle and the website.

When his colleagues put out tweets and raised alarm over his summoning to the Safa Kadal police station in Srinagar, the Committee to Protect Journalists, a New York-based watchdog, took notice of the matter and urged authorities to release Shah immediately. “Srinagar police summoned Fahad Shah, the editor of The Kashmir Walla, today at 6:30 pm in relation to a news story published by the outlet, according to his colleague Yashraj Sharma,” it said in a tweet. “Shah is yet to come out of the police station, Sharma added. CPJ demands his immediate release.”

At 10:02 pm, Fahad tweeted out the confirmation of his release. “They had called me in connection with an FIR filed on May 19 when the police objected to our coverage of the gun-battle that had taken place in Nawa Kadal,” he told The Wire. “Police said I was exaggerating the incidents”

Shah described his conversation with police officials as polite and civil. “They eventually allowed me to go.”

Fahad was thrice summoned by the police last year in connection with his news reports. He said his repeated appearances before the police have brought about a sense of fear amongst his family members who have urged him to leave India. “I already have several offers to work abroad. But I chose to stay here and commit myself to honest and no-holds-barred journalism.”

Shah is an alumnus of SOAS University of London where he was enrolled as a Felix scholar in 2013. He has also edited an anthology, Of Occupation and Resistance: Writings from Kashmir, published by Tranquebar Press. He is currently working on two books. He is also a correspondent at the Christian Science Monitor, an American newspaper and has been featured in publications like Time Magazine, Atlantic, Guardian and Foreign Affairs and Foreign Policy. “I can simply go and work in the US and UK. But I feel I should stay in Kashmir and contribute to this place in spite of such a suffocating and press-averse environment,” he said.

His publication, awarded a grant last year by Reporters Without Borders, a Paris based nonprofit that aims to safeguard the right to freedom of information, is already short of funds. “The grant has dried out and now we can only survive on payments sourced from our readers,” he said.

India’s press freedom ranking has seen a consistent decline over the last few years. Last week, Freedom House downgraded India’s status from ‘free’ to ‘partly free’ and among the reasons listed for this demotion was Modi government’s crackdown on “expressions of dissent by the media, academics, civil society groups, and protesters”.

Authorities in J&K have also issued a slew of new policies that restrict media freedom. In 2020, the Department of Information and Public Relations J&K enacted a media policy that threatens to strike off newspapers from official empanelment and punish reporters and editors for “anti-national” coverage.

Last year, the government also seized the office of the Srinagar bureau of the Kashmir Times newspaper.

The Wire reached out to Superintendent of Police Sandeep Gupta, who featured in several videos in connection with the incident, with queries about the alleged assault. However, he hung up on the call citing unfamiliarity with the reporter. The Wire has sent a message to Gupta and this article will be updated when a response is received.