In an official statement, J&K police has said the 45-year-old woman died in the wake of “indiscriminate firing by terrorists.” Her family has questioned the degree of certainty with which police has claimed this. Srinagar: In the early hours of Thursday, members of security forces were involved in a gun battle with militants at Firdousabad area of Batamaloo in downtown Srinagar. Three militants died during the encounter, along with a civilian, 45-year-old Kounsar Riyaz Sofi.

According to police, the militants were holed up in a house when they arrived. While the owners of the house have alleged ransacking by the forces, the family of the deceased woman have claimed that police has kept them waiting for the body, seeking assurance that there will not be any protests.

In an official statement, J&K police has said Sofi died in the wake of “indiscriminate firing by terrorists.” The family has also questioned the degree of certainty with which police has claimed this.

As per J&K police, joint teams of CRPF and police were leading a collaborative effort when their trail ended at the house in Batamaloo where three militants were hiding. “They were given a chance to surrender but they refused and fired. One CRPF officer and another CRPF man sustained injuries in the initial exchange of fire. The officer is critical and we are praying for his recovery,” the J&K DGP Dilbag Singh said at a press conference.

In a separate police statement released in the evening, the CRPF officer was identified as deputy commandant Rahul Mathur.

Singh also termed the death of Sofi “unfortunate” and expressed his “sympathies”. 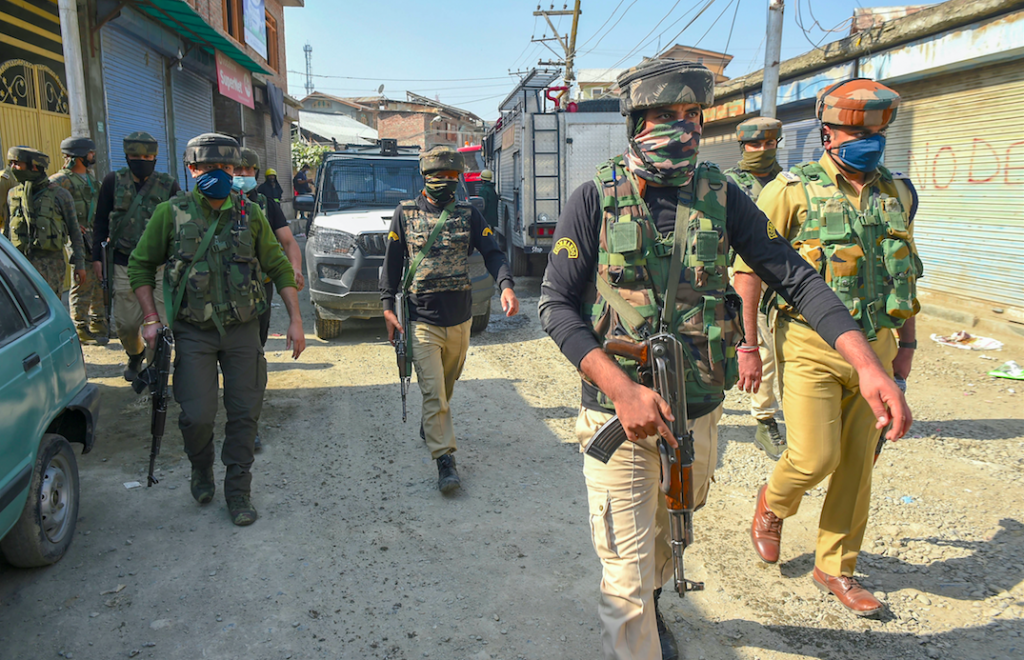 Version of the deceased’s family

Kounsar Riyaz Sofi’s son Aquib Riyaz (25) and other family members who spoke to The Wire have cast doubt over police’s claims that she died in terrorist firing alone.

The family owns a traditional bakery in the area. “We were on our way to the shop. My mother and I were in our Santro car when we were passing this area. The suddenly, we heard loud bangs. It was early, at around 4 am in morning,” he said, eyes swollen from crying.

On his mother’s insistence, Aquib said, he decided to turn around. “I turned my car around and revved the engine to leave. I must have driven only few metres when gunfire rang out,” he said. The bullet shattered the rear windshield and hit Sofi’s skull.

“We don’t know who exactly fired. It could well be Army, CRPF or SOG, we don’t know. I pleaded with them and told them my mother died. There was no reaction from their side,” he said.

Instead, members of the security forces directed Aquib to reach the Police Control Room in Srinagar. He drove to the PCR and disembarked, cradling his mother’s lifeless body in his arms. His clothes still had bloodstains when he spoke to The Wire.

Mohammad Amin Sofi, Aquib’s father-in-law, reached the PCR at around 4:30 am. “We have not been given the dead body yet,” he said, at the time of filing the report on Thursday evening.

“No police or government officer has approached us yet. They have been refusing to surrender the body claiming that it would vitiate the law and order situation. In fact, they told us we must give an undertaking that no protests should happen. How can we guarantee that?”

Aquib said that his father is an employee at Srinagar’s Chest Disease Hospital, where many COVID-19 patients are undergoing treatment. “He was working on the night shift when I called him and broke the news about my mother’s demise. He went straight to the PCR,” he said.

Relatives who trickled into the Sofi’s house were grief stricken, among them were her sister. When The Wire reached the site of the gunfight, the exchange had ended and half of the house was charred. The compound was littered with burnt household items, torn books, prayer mats, utensils and clothes. Smoke was everywhere.

No one from the family who lived in the house belonging to Abdul Majeed Ganai, a retired J&K bank official, was present. Neighbours and distant relatives were picking through the debris.

“The forces have decamped with jewellery and cash,” alleged one lady who refused to be identified but called herself a relative of Ganai. She gestured towards a cupboard left wide open. “It was rummaged by the forces,” she alleged. 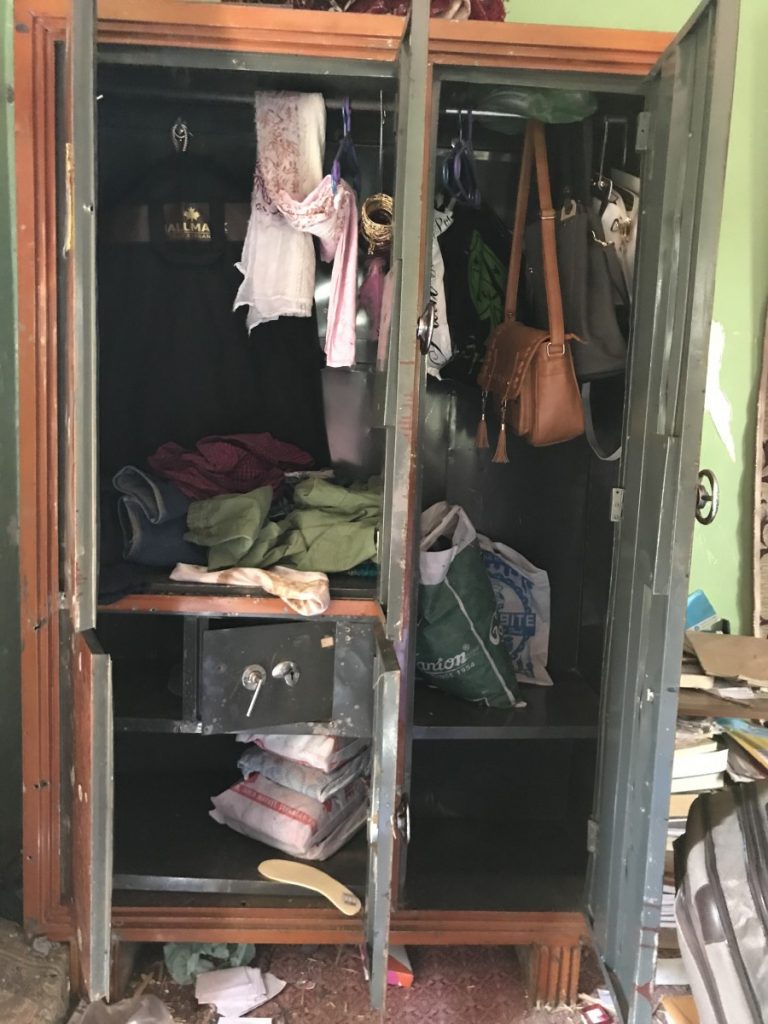 The Wire caught up with Abdul Majeed Ganai, in whose house the militants had allegedly taken shelter. Ganai said that the security forces knocked at his door at 2 am. “They took all the members of the house out and confiscated all our phones. My three sons were arrested and I have not seen them since,” he said.

Ganai, his wife and his daughters were asked to squat on the road nearby, but he chose to go to his brother-in-law’s place. “I could not have stayed out there with three young daughters,” he said. His sons Izhar ul Islam, Idrees ul Islam and Shaheed ul Islam – all below 30 years of age – are still under police custody. Izhar and Idrees are both doctors while Shaheed is a chemist.

He also said that the forces took away Rs 45,000 from his wallet, along with a gold chain, two rings and one out of a pair of earrings.

Ganai’s neighbours told The Wire that the gunfight ended at 7:30 am. “They brought the three bodies out on the street and then they were taken away,” said a neighbour who did not want to be identified. 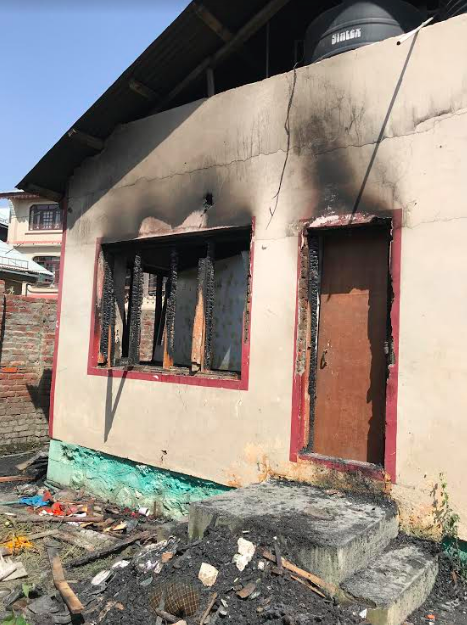 This comes a day after Irfan Dar, a 23-year-old shopkeeper was found mysteriously dead near a stone quarry. Dar had been in police custody. Police has labelled Dar an Over Ground Worker (OGW) which is a categorisation for individuals who assist militants or militancy. However, Dar’s family has strongly denied the charge and accused police of killing him in custody.

Seventh encounter in Srinagar this year

The Batamaloo encounter is the seventh gun battle that has taken place in Srinagar city this year. Footprints of militancy were almost erased until a few years ago here.

In February earlier this year, two militants and a CRPF personal died during a gun battle at Lawaypora near the outskirts of Srinagar city. In May, a 15-hour long encounter took place in Nawa Kadal area in which two militants died. The battle destroyed over a dozen structures, sparking violent protests, leading to several injuries. Later, two civilians died as charred remains of the structures fell on them.

On June 21, forces killed three militants belonging to Islamic State’s Wilayat-e-Hind faction during a gun battle in Zadibal area of Srinagar. In July, Zahid Ahmad Dass from the same outfit was killed during a fire exchange at Srinagar’s Malla Bagh area.

As per data crunched by Jammu and Kashmir Coalition of Civil Society (JKCCS), the Union Territory witnessed at least 229 deaths in different incidents of violence in the first half of 2020. Thirty-two civilians died in extrajudicial executions in the same time, the report observes.

J&K police on Thursday said that it has succeeded in dissuading at least 20 youth from joining militancy this year. DGP Singh also said that 177 militants, of whom 22 were non-locals, have died in 72 operations carried out by forces this year so far.

Police said that all the three militants killed on Thursday belonged to South Kashmir region and were associated with Hizbul Mujahideen. They were identified as Zakir Ahmad Paul of Shopian, Ubair Mushtaq Bhat of Kulgam and Adil Hussain Bhat of Awantipora.