Right-wing Hindu groups protested at the Raja Balwant Singh Management Technical Campus in Agra even though the students had already been suspended. 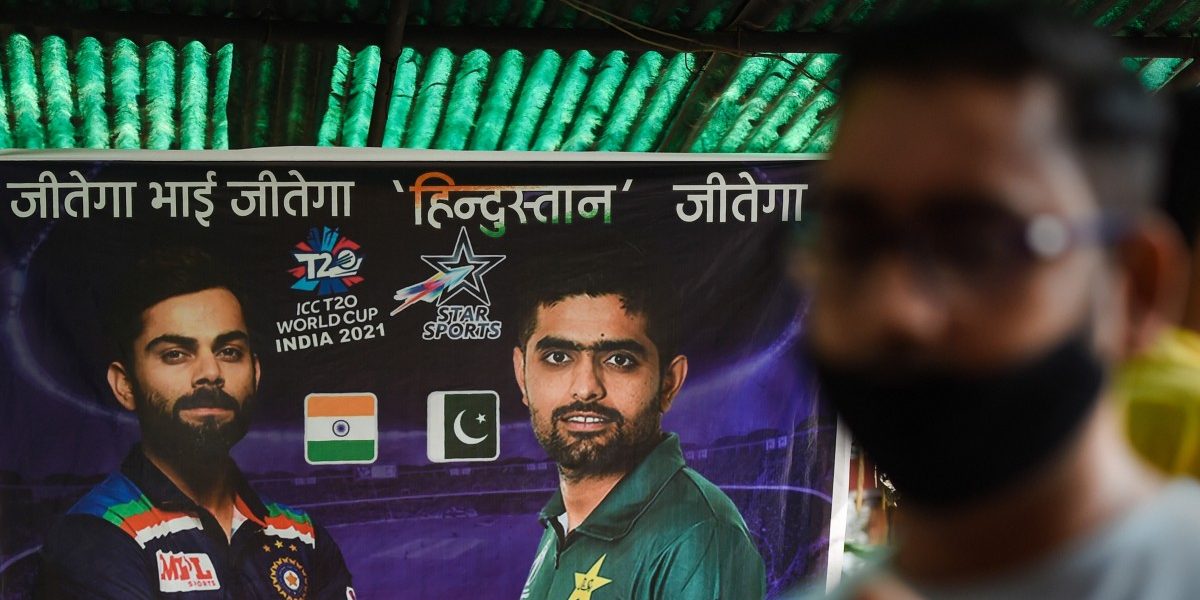 A cricket fan cheers for team India ahead of the India vs Pakistan ICC Mens T20 World Cup match in Dubai, while organising a yagya for the victory of Team India, at Ganesh Nagar in East Delhi, Sunday, Oct. 24, 2021. Photo: PTI/Manvender Vashist

New Delhi: Six persons, including a private school teacher in Udaipur and three engineering students from Kashmir who were studying in Agra, have been arrested for allegedly posting objectionable messages on social media or raising “anti-national slogans” after Pakistan’s victory over India in the T20 cricket World Cup.

Uttar Pradesh Police said seven persons have been booked in five cases in districts of Agra, Bareilly, Badaun and Sitapur. Out of them, five have been arrested, the police said on its Twitter handle.

Two more persons were detained by Jammu and Kashmir police, taking the number of detainees to eight in the case of pro-Pakistani slogans raised by some people in Samba district after the match.

The Jammu and Kashmir Police had earlier registered two cases under the stringent Unlawful Activities (Prevention) Act (UAPA) against some medical students living in hostels at the Government Medical College in Karan Nagar in Srinagar and SKIMS Soura. The action came after videos posted on social media showed students and others raising objectionable slogans and celebrating Pakistan’s victory in the high-voltage match between the traditional rivals.

Nafeesa Attari, a teacher who was sacked by Neerja Modi School Udaipur management for posting a celebratory WhatsApp status, was arrested on Wednesday morning, according to SHO of Amba Mata police station Narpat Singh. He said that the teacher has been arrested under IPC section 153 (B) (Imputations, assertions prejudicial to national integration).

Attari had put up a picture of Pakistani players with the caption, “Jeeeet gayeeee, We wonnn”. After screenshots of her WhatsApp status went viral on social media, the school management terminated her and a case was registered against her.

The teacher had released a video statement apologising for the post and saying she did not intend to hurt anyone’s sentiment. “Someone messaged me and asked whether ‘you support Pakistan’. As the message had emojis and it was an environment of fun, I replied ‘Yes’. But, it doesn’t mean anywhere that I support Pakistan. I am an Indian and I love India. I love India as much as everyone else does,” Attari said in her video message.

She further said, “As soon as I realised that I have made a mistake, I deleted the status message. I am sorry if I have hurt anybody’s sentiments.”

An FIR was registered at the Jagdishpura police station in Agra against three Kashmiri students from Raja Balwant Singh Management Technical Campus who were earlier suspended by the college and a police complaint filed against them by local BJP leaders.

SP City Vikas Kumar said, “Three engineering college students have been arrested after the complaint received against them on Tuesday.”

They have been booked under IPC Section 153 A (promoting enmity between different groups), 505 (1)(B) (with intent to cause, or which is likely to cause, fear or alarm to the public) and Section 66 F of the Information Technology Act, the police said. A tweet by chief minister Yogi Adityanath suggested that they may also be charged with sedition.

Dr Pankaj Gupta, director of administration and finance at the institute, had said on Tuesday that the students were suspended with immediate effect. “The students were studying under the Prime Minister Super Special Scheme. We have also apprised the PM office and AICTE of the students’ act. However, students have apologised,” Gupta had said.

On Wednesday, right-wing Hindu outfits protested at the Collectorate premises and demanded action against the students who celebrated Pakistan cricket’s victory against the Indian team. They also submitted a memorandum to the officials concerned in this connection.

“Yesterday, the college was functioning like it does when around 3.45 pm, several outside elements entered the college premises illegally and disrupted the studies. They also tried to forcefully enter the hostel, which is wrong and unacceptable. They did not have any conversation with the director of the college regarding this. When they could not enter the hostels, they raised slogans in the premises and also blocked the road outside,” reads the statement issued by the college, according to Indian Express.

“They also used objectionable language against the three students and also the college administration. They also said the college is a shelter for youths with separatist ideology, and made an attempt to ruin the college’s image,” it continues.

While many have expressed outrage on social media and demanded action against those seen in the celebratory videos, others have said there was nothing wrong with supporting another team.

Several leaders from Jammu and Kashmir including PDP chief Mehbooba Mufti disapproved of the police action and said it will further alienate the youths. Others have also said that the action – particularly the UAPA cases and arrests – are unfair and overboard, since all the students were doing was supporting a sporting team.