Govt Thought No Water, No Protest. They Were Wrong

When the government cut off basic facilities at the protest sites after the Republic Day violence, a group of kabaddi and football players, wrestlers, their coaches and NRIs swung into action and solved the crises. Jalandhar: In the first week of February, when Navdeep Kaur Brar, a resident of Bagha Purana village in Punjab’s Moga district, arrived at the Singhu border with a group of women to participate in the farmers’ protests, she was stunned.

There was no water. No power. No internet. No mobile phone service. The government had cut off all basic facilities for the protesters after the violence in Delhi on Republic Day. “The biggest crisis we faced was the lack of water for basic needs,” Brar said.

Brar, who is associated with the Samyukt Kisan Morcha (SKM), the umbrella body of the farmers’ unions, said that the clearest impact of the government action could be seen near the mobile toilets. “Throughout the day, there were long queues of men and women outside the mobile toilets. Somehow the men managed, but for the women there was no way out until volunteers, including many sportspeople, arranged water for us from nearby houses in Kundli village with hosepipes and buckets. Every day they ran back and forth between Kundli village and our camp, bringing water to us,” she said.

The lack of water did not only affect the toilets. About 10 to 15 jathas (Sikh groups) at the Singhu border were unable to prepare their langar (charitable meal made in a Sikh community kitchen) and clean their utensils until buckets of water arrived from Kundli village via volunteers from a group called Dharti Maa de Waarisa da Langar, which included kabaddi and football players, wrestlers, their coaches, non-resident Indians and other groups from different villages. Thankfully, there was no shortage of drinking water as nearly every langar stall had stocks of bottled water. “But considering the crisis, we used drinking water judiciously. At times, we had to use bottled water to address our basic needs,” said Brar.

Jarnail Kaur and Paramjit Kaur, also from Bagha Purana village, said that the volunteers did everything they could to ensure that the women at the protest site were safe. “They brought water and also deputed a volunteer to keep a vigil for miscreants. They cleaned the toilets too and the roads near the toilets, collecting the garbage and keeping the area clean,” they said.

Arvinder Kaur Kakra, a professor of Punjabi who returned to her home in Patiala at January end, said that the women at the Singhu border had had a harrowing time when the water and power supplies were cut off.

“One of the women with us had her period when the government stopped the water tankers from coming to the protest site,” Kakra said. “The toilets were filthy and she had to clean herself with tissues. We could not bathe for four consecutive days. But by the fifth day the volunteers had dug three borewells, installed motors and laid water pipes and taps near the mobile toilets.” 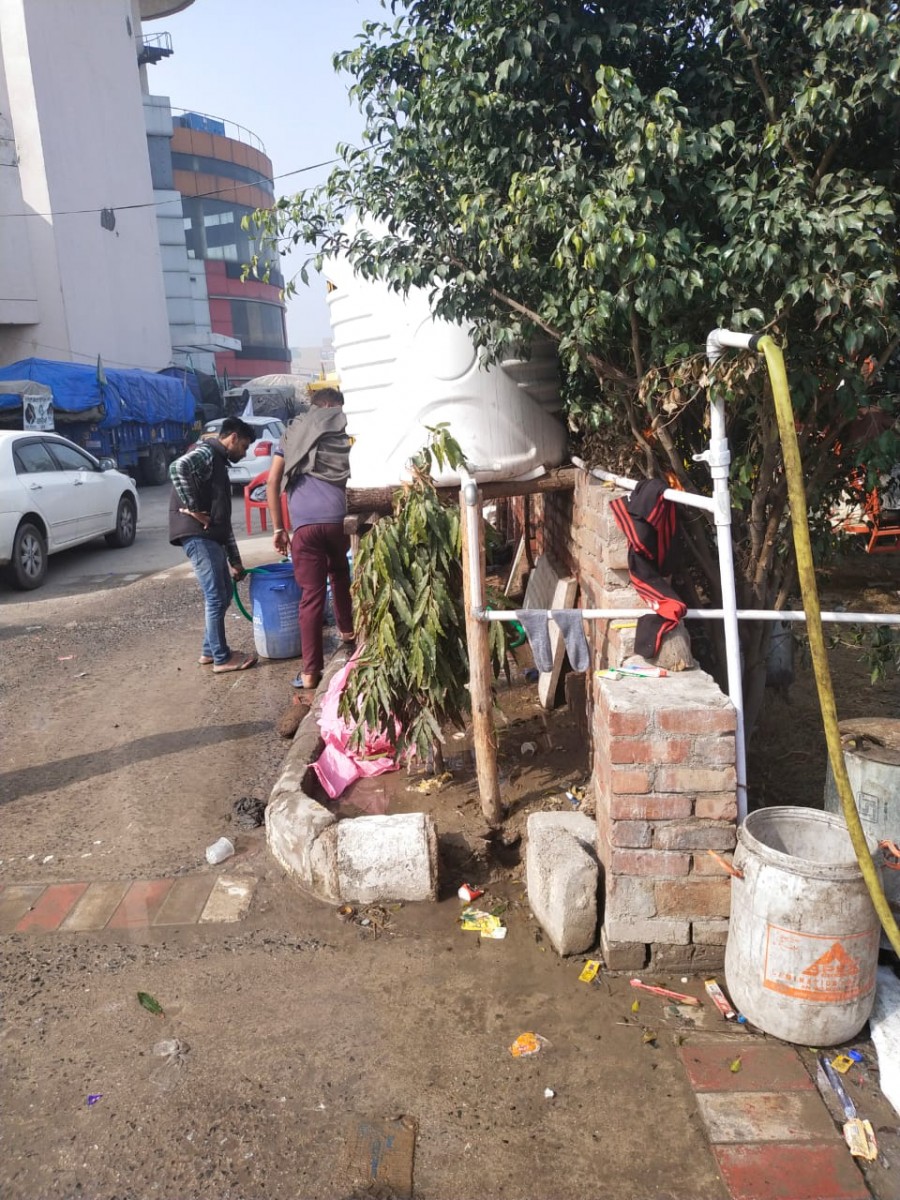 The government ban on basic facilities at the protest site did nothing to reduce the fervour of the protesters, said Kakra. “Rather, these draconian measures strengthened our resolve to fight the three black laws and save our farmers and the country,” she said.

When the volunteers from Punjab and Haryana began digging the borewells and laying the water pipes and taps, they were helped by a plumber who was at the Singhu border. An organiser from the Dharti Maa de Waarisa da Langar who did not wish to be named said that the protesters are also citizens of India and the government should think about solving the stalemate over the three new farm laws.

Manjot Machhiwara, a well-known kabaddi player from Ludhiana, said they had the water pipes and taps installed at three locations near their langar stall and the toilets. “It helped us to solve the water crisis, but as the protest is spread across an area of 12 to 15 kms, it is not enough to address everybody’s needs. We have been arranging water from the villagers at Kundli and the villagers have even allowed us to use their washrooms. There is no sense of animosity at all, no matter what the mainstream media reports,” he said. 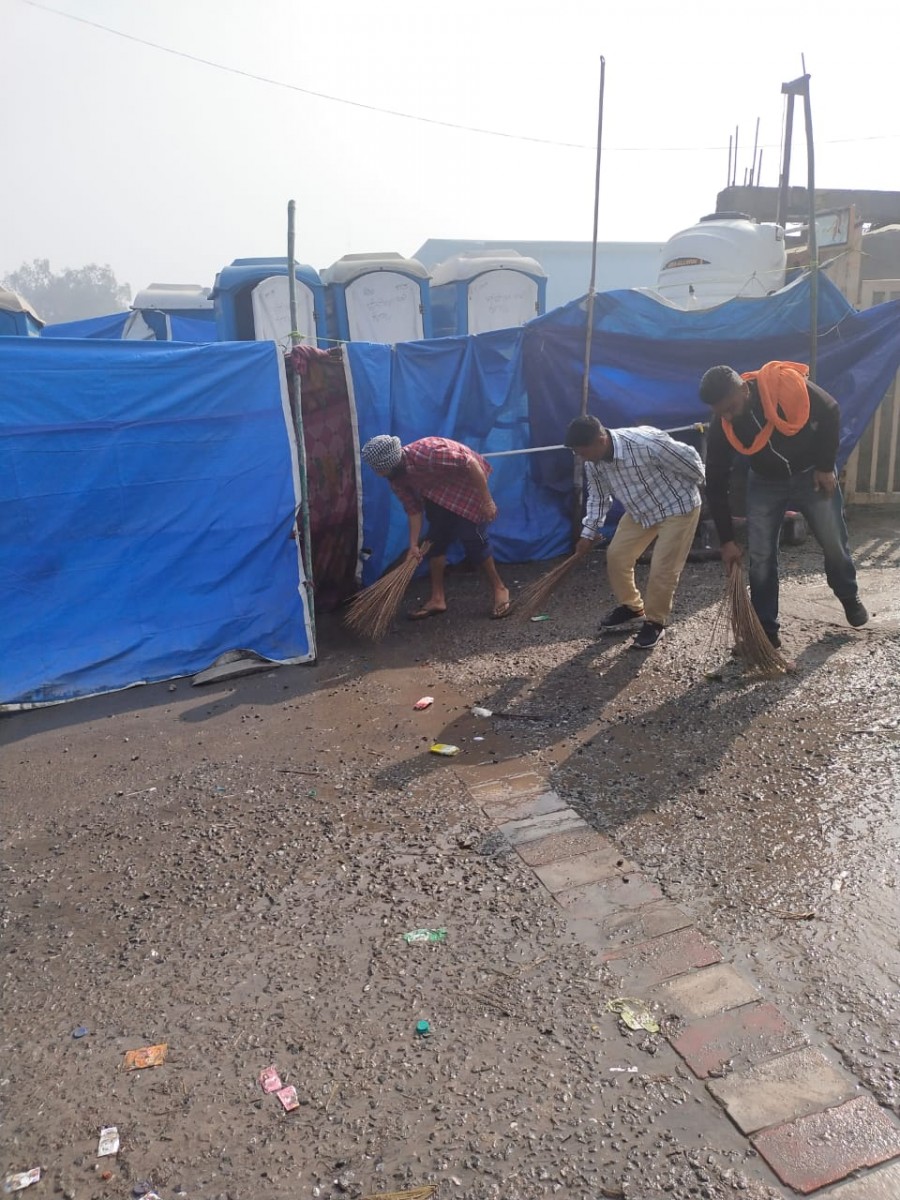 Nanni Gopalpur, also a kabaddi player from Punjab, said that for the volunteers, this is ‘sewa’ (voluntary service). “We have been here since November 26, 2020, and consider it our duty to serve others. Arranging water for the women was a big responsibility. Now we have four tankers of 1,000 litres each attached to the water supply system near the toilets. Even the washing machines have been connected with taps. We also hurriedly arranged diesel to run generators as there was no electricity for the first three days,” he said.

Harsurinder Singh, a sarpanch (head of the village council) from Kishangarh village in Jalandhar, said that after January 26, there was no electricity at all at the Singhu border site for a couple of days. “Initially we thought that this was because of a technical snag or a power cut. Later we learned that the government had snapped the power supply. We also caught four people cutting the power supply and informed the electricity company staff. There was no way to highlight our problems to the media either, because the police cordoned off the whole protest site. But now internet access has been restored and the government should create an ambience that leads to talks,” he said. A group of women from Bagha Purana village in Moga who were assisted by volunteers at Singhu border. Photo: Kusum Arora

‘The villagers are generous’

The protest site at Tikri border also faced a water shortage for a couple of days, but this was immediately addressed by the people of the adjoining Tikri Kalan and Tikri Khurd villages. Shingara Singh Mann, the state secretary of the Bharatiya Kisan Union (Ekta-Ugrahan), said that the protesters also approached the officials at a water supply station in the vicinity who agreed to help.

“Even the power disruption was for one day. The internet ban was a problem, but that too has been restored. It was the site at the Singhu border that faced a major crisis, not Tikri,” he added.

According to Sukhpreet Kaur, a student from Deep Singh Wala, Faridkot, the locals at the Tikri border helped the protesters wholeheartedly. “We faced a drinking water problem but the generous villagers helped us,” she said. “After January 26, new mobile toilets have been put up at Tikri border.”