While a J&K police spokesperson claimed that Shahid Ahmad Rather was killed in crossfire after “unidentified terrorists” attacked a team of the CRPF’s 178 Battalion, the family contest this claim. 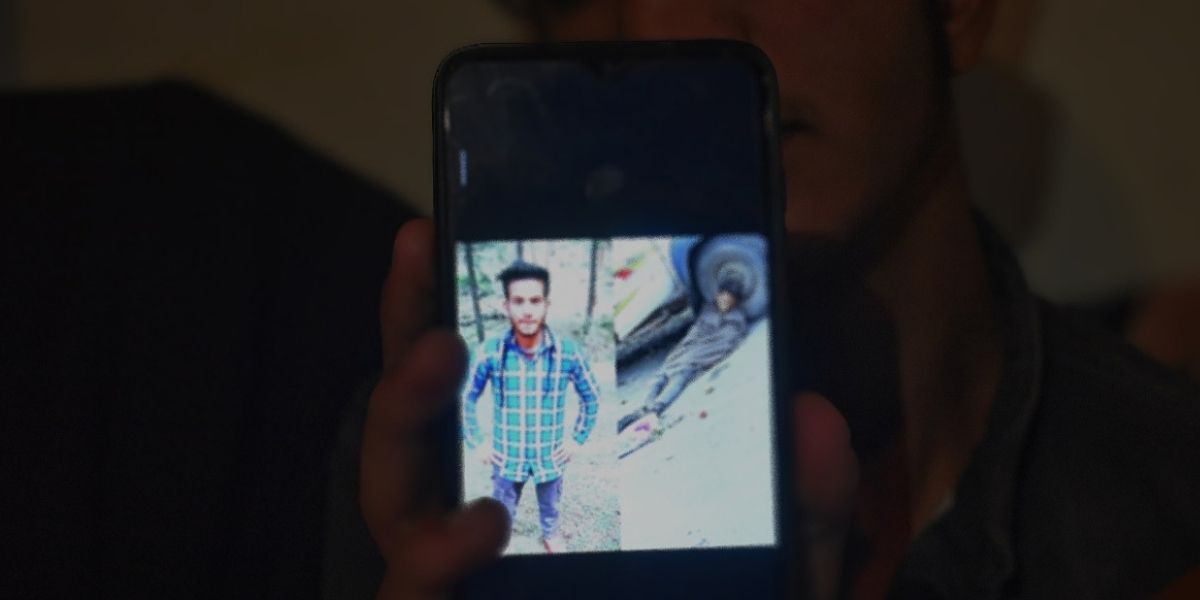 Shahid Ahmad Rather, a daily-wage labourer who was killed by CRPF jawans in Shopian. Photo: Faizan Mir

Srinagar: A day after the Union home minister Amit Shah reviewed the security situation in Kashmir, a 20-year-old civilian was shot dead under suspicious circumstances on Sunday morning near a CRPF camp in Shopian district.

A senior police officer identified the deceased as Shahid Ahmad Rather, a resident of the Arwani area in south Kashmir’s Anantnag district. A daily-wage labourer, Shahid was reportedly hired by a farmer to help with harvesting the apple crop.

Zubair Ahmad Rather, his younger brother, told The Wire that the victim was returning home on Sunday morning along with two friends when the incident happened. “He was walking few metres ahead of them when the CRPF troopers fired at him near Zainapora.”

“It is a targeted killing,” Zubair continued, struggling to hold back his tears. “They shot him in cold blood. There was no cross firing in the area. If it has happened with us, it can happen to anyone. They are killing innocent people and branding them as militants. We want justice.” A Jammu and Kashmir police spokesperson, however, claimed that “unidentified terrorists” attacked a team of the CRPF’s 178 Battalion in Babapora area of Shopian district, adding, “CRPF retaliated the fire and during cross firing, one unidentified person got killed. Further details are being ascertained.”

There were no reports of fatalities or injuries suffered by CRPF officers during the suspected attack.

The victim, a Class X dropout, is the eldest among four siblings and the major bread-earner of the family. He is survived by a grandmother, parents and a younger brother. The parents were on their way to Shopian to collect the body of their son when this report was filed.

“We are a poor family. He dropped out of school last year to earn and support his father. Was that his fault? He was not a militant. Why did they kill him in cold blood then?” his grandmother Azi Begum screamed as neighbours tried to console her at their residence. A graphic photo from the scene of the shooting, which went viral on social media, shows Shahid’s head against the tyre of a mini-truck. His legs are stretched and his hands are inside a pheran, the woollen cloak worn by Kashmiris to beat the winter chill.

The door to the truck’s driver’s seat is open. Blood smears a patch of the road and the white metal body of the vehicle where the door closes, suggesting that the victim’s body may have been staged before it was photographed.

Scattered on the road around the slain youngster’s body are freshly plucked apples and a white bag which apparently contained them.

“He had been away for four to five days. He quit school to make some money and help his family. They are a below poverty line family. His killing has shocked the entire village,” said a neighbour who didn’t want to be identified.

This is the second civilian killing in the month of October involving the Central paramilitary forces and it took place on the day when the Union home minister is in the union territory as part of the government’s J&K outreach programme.

On October 7, Parvez Ahmad Khan, a poor nomad and the breadwinner of his family of seven – including two minor daughters and pregnant wife besides ageing parents – was killed by CRPF officers in Anantnag.

Parvez, who belongs to the nomadic community, was allegedly travelling with another person in a plateless Mahindra Scorpio car which was signalled to halt at a CRPF checkpoint in Anantnag’s Rooh-Monghal village.

“However, it [the car] rushed towards the checkpoint. It was then challenged by the on-duty troops. Troops fired upon [the car] in self defence, in which one person died. But the driver of the vehicle managed to escape from the spot,” a J&K police official had said.

Parvez’s family allege that the CRPF officers acted in haste and shot Parvez without following the standard operating procedure. The family had demanded an impartial probe into the incident.

Both the CRPF and J&K Police have not revealed the identity of the second person travelling in Parvez’s car. There are no details about whether the matter was being probed at all or the progress of the investigation.

CRPF’s inspector general (Kashmir), Charu Sharma, could not be reached for comment. 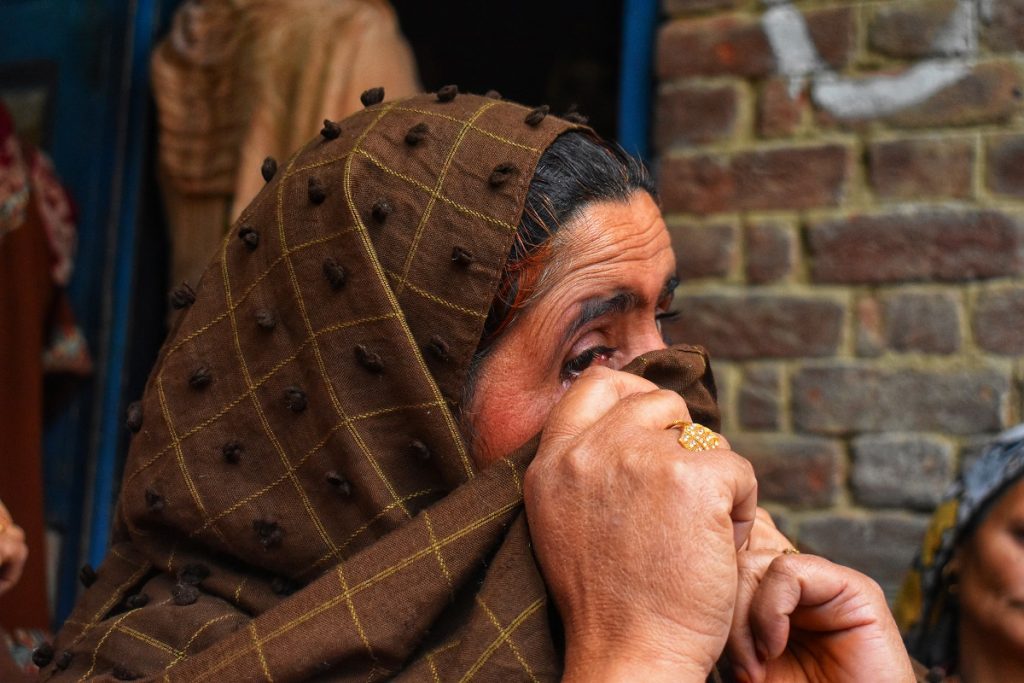 Kashmir has recorded a spike in insurgency-related violence this year, leaving close to three dozen civilians dead, including political workers. Over the last two weeks, at least 10 civilians – mostly migrant workers and members of Kashmir’s minority communities, have been killed in suspected militant attacks.

Most of these attacks took place in Srinagar, which was declared militancy free just a year ago. Several police and other security officials were also killed by ‘hybrid militants’ in “shoot-and-scoot” attacks, which has emerged as a major challenge for Kashmir’s counterterrorism grid.

Security forces have responded to the challenge by stepping up counterinsurgency operations across Kashmir, killing 17 militants, most of them untrained recruits affiliated with the Resistance Front. Many of them had recently become militants.

Speaking at Srinagar’s Sher-e-Kashmir International Convocation Centre, Shah, who will return to Srinagar from Jammu by Sunday evening, had beckoned youngsters in Kashmir on Saturday to “become friends” with him but the latest killing in Shopian is likely to dampen the call.

“This how you want to befriend youth of Kashmir, how you want to ‘establish’ peace @AmitShah ji? Are we allowed to even condemn ‘other’ victims like Parvaiz & Shahid? I don’t know about golden letters in history but pages of Aug 5 book are certainly stained with lot of blood,” Peoples Democratic Party spokesperson Najmu Saqib tweeted.

The party chief and former J&K chief minister Mehbooba Mufti tweeted: “Another innocent civilian killed allegedly by CRPF in Shopian today. Its sad that armed forces show little restraint & operate with such impunity. My heartfelt condolences to his family.”

National Conference’s provincial spokesperson Imran Nabi Dar said, “Heartwrenching image of young man killed in Shopian. Shahid Ajaz, they say, was in his milk van, his arms inside his pheran, trying to make ends meet and was ‘caught in cross firing. No accountability. Pain that Kashmir has borne and continues to bear is beyond anyone’s measure.”