For Recognising the Signs of Fascism, a Teacher Must Be Suspended

Recent events at Sharda University are a reminder that given the global climate now, the RSS does not want to be recognised as fascist – even if it continues to behave in fascist ways. 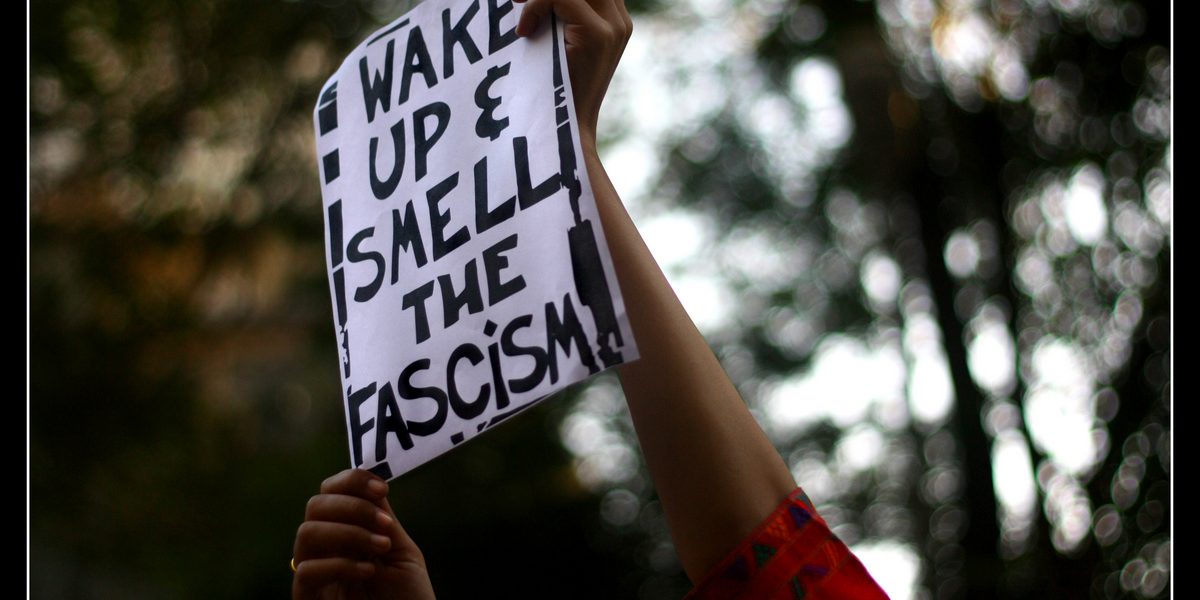 It is amusing to read the letter issued by Sharda University after an alleged uproar over a question asked in the examination for first year BA political science students. The offending question reportedly read, “Do you find any similarities between Fascism/Nazism and Hindu right-wing (Hindutva)? Elaborate with the argument.”

This academic question became a matter of public discussion. We don’t know who was offended, or why it should offend anybody at all. Apparently the people from the ruling establishment were hurt by the suggestion made in the question. The University Grants Commission too jumped on the bandwagon, claiming that the question goes against “spirit and ethos of our country, which is known for its inclusivity and homogeneity”. But it difficult to understand how this question could foment social discord.

There was a possibility of some people disagreeing with the comparison. But this was not a question addressed to all and sundry; only those who had studied political science were asked. Others would not have the necessary academic competence to answer it. But to even imagine it causing a discord in society is taking things too far. Given the way the members of this ruling establishment behave, there was a distinct fear of them inflicting violence on the members of the staff of the university. That would have been the only social discord resulting from the matter, ironically proving the validity of the question asked in the exam.

Then the university claims that “civilisational revival” is its mission. Was there a civilisational downfall from where we are trying to raise ourselves in the first place? Even if we agree with this crass boasting by the university, how does this particular question on Hindutva and fascism impede this great endeavour? Could it not be that deliberation on this question may in fact help us revive our civilisation, which many well-wishers of India see sliding further and further away from where it should be?

Also read: In a Korean Rapper’s Brush With Online Hatred, a Lesson For India

That aside, we need to understand who gets offended by being called a fascist. Is it an abusive term? We often, at the drop of a hat, say this or that leader is fascist. Only the other day, a well-meaning author wrote that the mob indulging in violence during Ram Navami processions and other Hindu festivals could be over enthusiastic, but shouldn’t be called fascist. Not that they were called fascist by anyone. All that people said was that under fascism, such violent mobs are organised to attack minorities. If we find anyone acting slightly in an authoritarian manner, we tend to call her or him fascist. But the teachers who designed the question wanted students to recall what they had studied and apply it to the Indian condition.

Fascism is a political ideology. And who can disagree that Hindutva is also a political ideology? Can we compare the two? Put simply, fascism wants its people to unite. But what is the basis of this unity? Who are the people it wants to unite? And what does this unity look like? To understand that, we need to go back to the origin of the term.

It was Benito Mussolini of Italy who coined this term in 1919, nearly a century ago. It emanates from the Italian word “fascio”, which means a bundle or group. The fascists called for a militant brotherhood. Violence was ingrained in the original concept. The word “fasces” means an axe tightly bound with sticks. This image became a symbol of the fascist movement.

If Mussolini was the theoretician, it was actually Hitler who demonstrated what fascism in action would look like. The brotherhood of fascism cannot be imagined with an outsider who is the counterpoint of this unity. That outsider can also be or is always an intruder, an encroacher who like a termite can hollow this brotherhood and make it weak. So, it is important to have unity but more important to remain on constant alert, looking for these intruders and destroying them to defend the strength of that unity. Not only strength but also the purity of that brotherhood. No pollution can be allowed.

According to Jason Stanley, the author of How Fascism Works, “[Fascism is] based on an ethnic division between ‘us’ and ‘them’, an extreme ethno-nationalism. It’s based on nostalgia for a mythic past, typically in which members of the chosen ethnic group had an empire – and it represents the present as loss of that great empire, that natural standpoint in which members of this ethnic group dominated their environment militarily, politically, and culturally.”

There have been many victims, observers and scholars of fascism in the last 100 years. They help us understand what fascism is and how you can identify it. Robert Paxton, who teaches at Columbia University, explained to Live Science that fascism is “a form of political practice distinctive to the 20th century that arouses popular enthusiasm by sophisticated propaganda techniques”.

According to Paxton, fascism uses such propaganda to promote:

Thinkers like Umberto Eco warn that fascism can enter in plain clothes when we are looking for brown shirts and can take the most benign form. Like adopting ‘Gandhian socialism’ as the guiding principle. But the essential idea is to appeal to the unity of its people. Also by telling them that they are the best in the world. And there are wretched people conspiring against them. They are everywhere, inside the country and internationally too. So, the people who are followers of this ideology have to feel constantly under siege.

“The followers must feel besieged,” wrote Eco. “The easiest way to solve the plot is the appeal to xenophobia. But the plot must also come from the inside: Jews are usually the best target because they have the advantage of being at the same time inside and outside.” In India, it is the Muslims.

Fascism does not always come through armed insurrection. It can take the route of elections, as it legitimises itself by presenting itself as the expression of the will of the people. It is most democratic. The people want it.

Now, can we compare fascism with Hindutva? Hindutva, like fascism or communism, is a political ideology. It contains the term Hindu, but it definitely does not mean Hindu religion. Or a Hindu as a religious person.

Hindutva is a political ideology propounded by Vinayak Damodar Savarkar. He made it very clear that Hindutva should not confused with Hinduism. In his treatise written in 1922, and later expanded in another book, he defined Hindutva sharply, so that there was no ambiguity. Savarkar proposed that Hindus constituted a nation, bound together by common blood, and that Hindus were united “by the tie of a common heritage we pay to our great civilisation — our Hindu culture”. Savarkar rejected the word “Hinduism”. Hindutva tells you what the essence of the Hindu way of life is. According to him, “If there be any word of alien growth it is this word Hinduism and so we should not allow our thoughts to get confused by this new fangled term.”

The Hindus’ devotion to their motherland was supreme. The essential qualification of being a Hindu is to have Bharat as your punya bhumi. That is why Muslims and Christians are disqualified. They can join the fold of Hindutva if they eschew their relation with the alien lands as their holy land.

Savarkar’s cunning was in his use of the term Hindu. Also his opportunistic use of the figures sacred to Hindus. These are useful as they can be a unifying thread to weave together Hindus. If the non-Hindus refuse to join this fold, they have to be either eliminated or forcibly subdued.

This ideology of Hindutva was made into its guiding philosophy by the Rashtriya Swayamsevak Sangh. For its founders, Mussolini and Hitler were idols. Hitler’s way of dealing with the question of aliens to the German race, to keep it pure, fascinated them. This is what they set out to implement in India.

Here the people of Hindutva are the Hindus. Those against whom they have to unite are Muslims and Christians, primarily. If they agree to be vassals of Hindus, they can be allowed to live. But they won’t have any political rights.

There are other claimants to this ideology as well. For example, the Shiv Sena. As it has recently announced in Ayodhya, it is the ‘real one’. But the fountainhead of this ideology remains the RSS.

If we look at the calls to annihilate Muslims and Christians, and listen to them alongside calls to do everything to establish a Hindus rashtra, to be prepared to be killed and kill, one understands clearly who is to be killed.

So, there is a legitimate reason for any teacher of the paper on political ideologies to pose this question. Any scholar will approach it by looking at what fascism did and what Hindutva is doing. The comparison is valid.

One is not surprised, however, that proponents of Hindutva don’t want to be known as fascist. Because unlike the times of Moonje and Hedgewar or Golwalkar, fascism is now a term universally reviled. The RSS cares for its international image. That is one reason it adopted Gandhi as one of those who should be remembered first thing in the morning, after one of its kin killed him. There is another reason. No murderer wants to identify himself as a murderer. I also often recall Adorno, who had said that if you tell the hangman about the presence of the noose in his house, he gets angry.

So fascists don’t want to remembered as fascists. But scholars are not obliged to appease them. That is why such questions are necessary.

Even if Sharda University has suspended the teacher for framing the question this way, I must confess that I developed some respect for the university because this question is evidence that it has some teachers remaining who are also academics and scholars in true sense of the term. Let us hope that in the present circumstances, the temporary suspension helps the university keep the goons of Hindutva at bay, as the Central University of Kerala did by suspending a teacher for exactly the same reasons: teaching fascism and encouraging students to develop a comparative understanding. This, sadly, is the only way universities can survive nowadays.