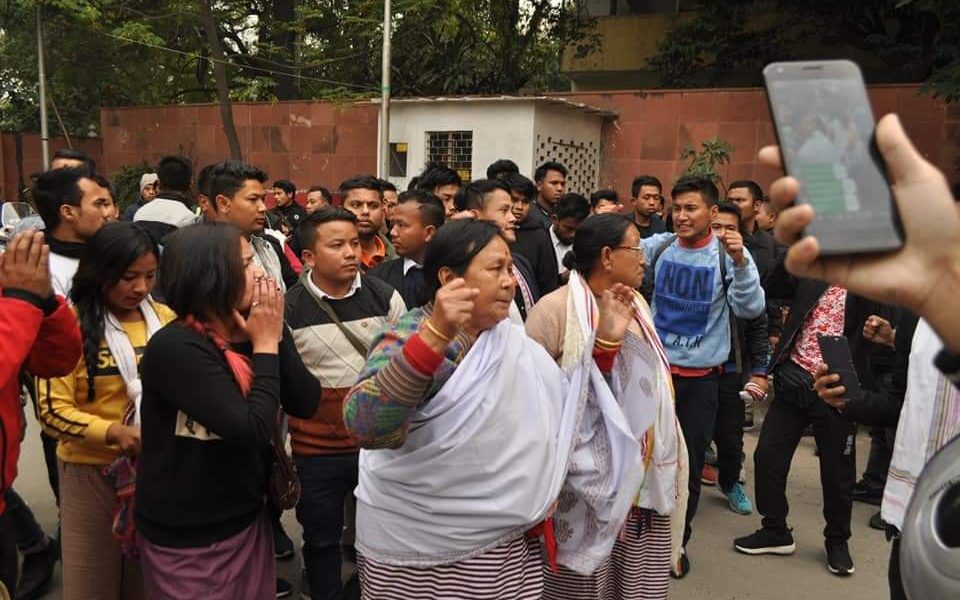 A flash protest against the Citizenship (Amendment) Bill, 2019, was carried out near the Rashtrapati Bhavan in New Delhi on January 30, 2019. Credit: MSAD/Facebook

New Delhi: A flash protest against the Citizenship (Amendment) Bill, 2019, was carried out near  Rashtrapati Bhavan in New Delhi on Wednesday jointly by at least seven student bodies from Manipur.

Over a hundred protesters were seen disembarking from a bus near the road that links Parliament House to the President’s House. Within no time, they set effigies of Prime Minister Narendra Modi and Union home minister Rajnath Singh on fire and started shouting anti-BJP slogans.

This is the second flash protest this month by Northeast groups in Delhi’s high security area against the Bill. On January 7, several members of a peasants’ body from Assam, the Krishak Mukti Sangram Samiti (KMSS), carried out a flash nude protest and shouted slogans against the Centre. The police detained the protestors at Parliament police station till late in the evening.

On the afternoon of January 30, upon seeing the effigies being burnt, Delhi police personnel present at the spot rushed to douse the fire and began to push the protesters away. Among those shouting slogans against the Bill were women belonging to Meira Paibi, the powerful mothers’ body of Manipur which took up the fight against AFSPA (Armed Forces Special Powers Act) in the state. A number of videos circulated from the spot on social media show the police using force on protesters, leaving four people injured including a member of Meira Paibi.

The police later detained about 80 protesters including the president of these student bodies and the Meira Paibi members. They were taken to Mandir Marg police station around 4.30 pm. and are still in custody. Policemen at the station said they were “awaiting orders from above”.

Speaking to The Wire from the police station, detained MSAD president Thockchom Veewon said, “Earlier in the day, we held a meeting at Jantar Mantar against the Centre’s decision to bring the Bill, which will affect the indigenous people of Manipur and the rest of the Northeast. We didn’t inform anyone about the plan to protest near Rashtrapati Bhavan and to burn effigies of the prime minister and the home minister as we thought we would then be stopped. In fact, we had people in two buses. The bus drivers also didn’t know about our plan. The first bus was not allowed to stop there by police. The second bus did and we rushed out, burnt the effigies and began shouting slogans before the police could notice us.”

Protests against the Bill have been continuing across the Northeast since the Bill was passed by the Lok Sabha in the last parliament session. It is awaiting the nod of the Rajya Sabha before becoming a law.

As per the Bill, Hindu Bangladeshis, besides some other non-Muslim groups from Pakistan and Afghanistan, would be granted Indian citizenship on religious lines if they entered the country, even without legal documents, before December 31, 2014. Most indigenous groups in the Northeast are of the opinion that it would amount to legitimising the stay of “illegal immigrants” in the region and affect them politically and culturally.

Aside from the Delhi protest on January 30, a huge rally against the Bill was also brought out in the tribal areas of Tripura, jointly by 16 organisations including the Tripura Students Federation and the North East Students Union. Khumulwng, the headquarters of the Tripura Tribal Autonomous District Council (TTADC) situated about 20 kms from the state capital Agartala, saw a gathering of about five thousand people from around noon. The scion of the Tripura royal family, Pradyot Manikya Debbarma, who led the protest, addressed the rally among others.

Protesters said petrol pump owners of the area were instructed by the state administration not to supply fuel to them to take part in the rally. In a social media post, Debbarma, who is also the working president of the state Congress, said, “Dear administration of Tripura, you may ask petrol pumps not to give our people diesel to come to our rally. Dear government, you may instruct your workers and employees to not attend our non-political rally against the Bill and quell our free speech but the more you prevent us the stronger we become.”

Meanwhile in the Tinsukia district of Assam, the local unit president of the BJP was thrashed by the All Assam Students Union (AASU) and All Assam Yuva Bhatta Parishad members protesting the Bill.

Condemning the incident at a press meet in Guwahati, state BJP president Ranjit Dass warned AASU, saying it should think what would happen if thousands of BJP members come out against its members.

Earlier this week, BJP workers attacked AASU protesters in Nalbari in lower Assam for showing black flags to chief minister Sarbananda Sonowal and finance minister Himanta Biswa Sarma. They also thrashed some AASU members inside the Nalbari police station besides trampling on the flag of the student body, leading to a tense situation in the area.